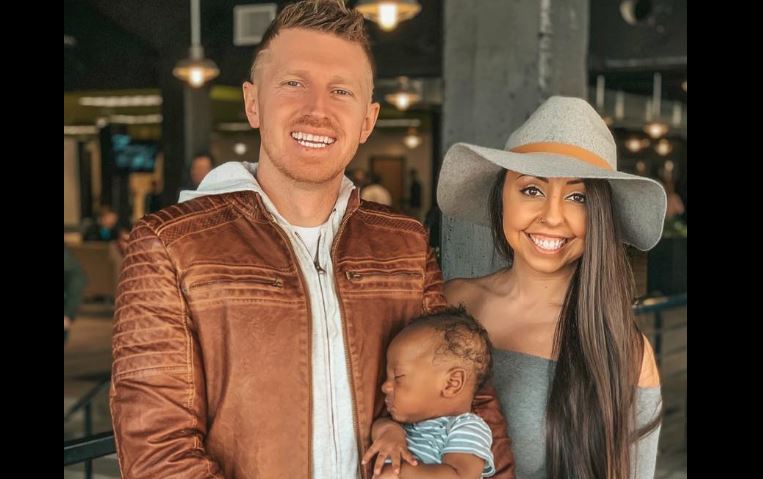 On the anniversary of their adoption announcement, Ashley Evans recalled the nervous excitement she and her husband Steven felt after deciding to become adoptive parents. Even though they knew the waiting could take years, the couple had “high hopes” as they began their adoption journey.

After struggling with the “emotional rollercoaster” of infertility, and the disappointment they felt after two biological mothers decided to keep their babies, the couple did not give up hope. Eventually, their adoption lawyer connected them to another attorney with a client who was expecting a baby boy. Deciding to name him Abriel, the couple drove the four hours to meet the birth mother.

“The next few months were a whirlwind of emotions,” wrote Evans in an essay for Love What Matters. “We were able to experience all of the precious moments any normal expecting couple gets to experience! We got to make a ‘pregnancy announcement,’ we got to host a gender reveal party, we were able to have a beautiful baby shower, and we were able to be at the hospital when our perfect baby boy was born. Although we wish we could say this was the best day of our lives, we would be lying.”

I’m interrupting my regularly scheduled fashion posts to introduce you to Abriel Isaiah Evans! 💙 Abriel was born November 8th at 2:25pm, weighing 8lb 2oz, and he is the most PERFECT baby in the entire world! There are no words to express how selfless it is for someone to choose to make an adoption plan for a baby that they love so much, or for us to express how thankful we are for receiving the greatest gift of all time! Abriel is so lucky to have so many people who love him and we are so lucky to be able to stay in touch with his birth family! This journey is far from over but for now we are going to enjoy all of the baby snuggles we can! Abriel Isaiah Evans – we love you more than we ever thought imaginable. Thank you for growing our little family. 💙

“7 days, we just had to make it through 7 days. For us, these 7 days felt like an eternity,” admitted Evans. “I can’t even begin to imagine what those 7 days (and every other day since then) has felt like for Abriel’s birth mom. The person who gave us the most precious gift on the planet. The person whom we have grown to love with all of our hearts and someone we could never repay. The STRONGEST person we’ve ever met. That’s the kind of stuff you don’t think about at the beginning of this process. You don’t think about that moment, the moment she delivers her baby, and the sadness on her face. The moment that you’re up in the NICU with a baby whose a stranger to you, knowing that his birth mother (who carried him for 9 months) is down on another floor going through the worst day of her life. The following moments that you have that baby in your arms, knowing that he could be taken away at any time. Were we selfish for not wanting him to be taken from us?”

They all spent time in the hospital together as Abriel’s birthmother prepared to say goodbye. But shortly after they had taken Abriel home, with just two days left until the paperwork was all signed, the new parents received a familiar message: Abriel’s mother had changed her mind. They would have to bring the baby back to her. “I didn’t sleep that night, knowing that the next day, we would be saying our goodbye to [Abriel],” Evans said.

You are my Son-Shine ☀️ Nothing beats spending time outside with this little hunk! 🥰 Linking my entire look and some of my favorite infant hooded flannels & pants. You can instantly shop my looks by following me on the FREE LIKEtoKNOW.it shopping app or by going to the link in my bio ⬆️ and clicking on: Shop My Looks! http://liketk.it/2Pcc7 #liketkit @liketoknow.it #LTKunder50 #LTKbaby #LTKspring

Then, Abriel’s birth mother called and the two mothers laid their feelings out before one another.  “We both cried. She explained her feelings and I explained mine,” said Evans. “I eventually told her that we couldn’t do this anymore. We knew that this was the biggest decision she would ever have to make and that we couldn’t even begin to imagine what she was going through, but at the end of the day, we needed to protect our hearts too. We never wanted to feel as though we forced her to give Abriel to us. Unless she knew that this is 100% what she wanted, we needed to give him back.” Within that one-hour phone call, the women bonded, and Evans said she “felt closer than ever with her.” When it was over, Evans knew Abriel was hers.

Abriel is now six months old. Though the journey toward adopting him was long, Evans affirmed it was “100% worth it!”

“Not only did we gain the most beautiful baby boy, but we also gained an entire family. Abriel’s birth family will ALWAYS be a part of his life and a part of our family. Nothing could describe the love that we have for them and there’s nothing we wouldn’t do for them,” Evans declared. She also shared a piece of advice about adoption she heard from a social worker – to make it about the birth mother, not the baby.

IT’S TIME TO CELEBRATE!!!! 🥳 Today we finished our last post placement visit with our social worker! Y’all, this means that in just 16 short day, we’re clear to close on our adoption!!!!! 🎉 I can’t even begin to describe how excited we are! There have been so many times throughout this journey when it seemed there was no end in sight and now we’re ALMOST THERE! Although we won’t be able to throw the big courthouse party with all of our family and friends, we’ll still have the best day ever knowing that Abriel Isaiah Evans is ours at last! 🥰