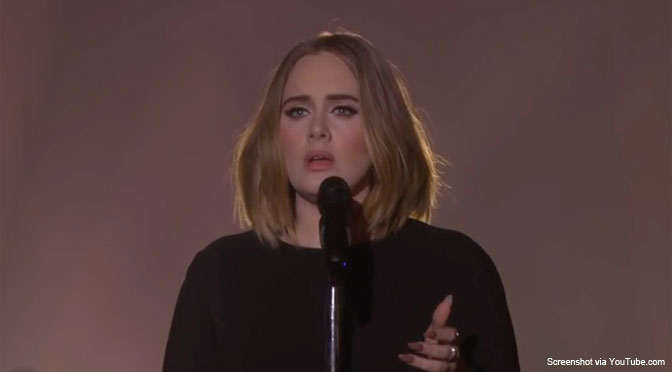 Remember when Natalie Portman won an Oscar, and in her acceptance speech, thanked her husband, Benjamin Millipied, for giving her “the most important role of her life”? This, of course, made the pro-abortion feminists of the world apoplectic with rage. How dare she say that being a mother was more important than her acting career?! Women aren’t supposed to make motherhood their number one priority, after all. Education and career are supposed to be first.

So Adele might want to brace herself. The Grammy-winning singer has made some waves of her own after doing an interview with Vogue, where she said that her son finally gave her a purpose…

“When I met Simon, I knew that something was going to happen,” she remembers. After the world-class losers whose bad behavior became the fodder for some of the most universally powerful songs of our time, Adele had finally found herself a winner. Their son, Angelo, was conceived, she tells me authoritatively, “the day the last Vogue cover came out!”

The two new men in Adele’s life transformed it completely. They have eradicated the need for much of the drama that she used to thrive on. “I can’t have any other junk in my head to worry about as well,” she tells me. Angelo, meanwhile, “makes me very proud of myself. When I became a parent, I felt like I was truly living. I had a purpose, where before I didn’t.”

She added in the interview that her priorities were now being a mom first, then herself, and then her career. Unsurprisingly, Slate blogger Elissa Strauss was bothered by that, and wrote a blog post lamenting the idea of a woman publicly saying that motherhood gave her a purpose.

This is a bold, potentially controversial, statement for a celebrity mom. Adele, ADELE, didn’t feel like she was truly living before she became a mom?! She, the universally adored force of nature behind, at the time, one of the bestselling albums of all time, felt like she didn’t have a purpose?

This type of sentiment has backfired for female celebrities before. When Natalie Portman dared to suggest that motherhood might be ““the most important role of [her] life” in her 2011 Oscar acceptance speech, she received a lot of pushback. “Is reproduction automatically the greatest thing Natalie Portman will do with her life?” asked Salon’s Mary Elizabeth Williams at the time. There’s been similar resistance to calling motherhood “the most important job in the world.”

… A major goal of feminism has been for women to be able to seek lives and identities that exist outside their traditional roles as mothers and caretakers. The degree that feminism has been successful in this has, without a doubt, been fantastic for women. Still, there remains debate about exactly we are supposed to make of our roles as mothers now that we’ve been (partially) liberated.

Strauss concludes by saying that Adele is allowed to find motherhood fulfilling (Adele will surely be around to thank you for giving her permission to love being a mother anytime now, Elissa), but it was clear that Strauss is troubled by the idea that a spectacularly successful woman would give motherhood, and not her career, such high praise.

And this is how Slate chose to promote Strauss’ piece: with the words “uh-oh” — how very Cosmopolitan of them.

It’s made overwhelmingly clear, over and over again: these abortion advocates, much as they try to pretend to be “pro-choice,” don’t care about women making their own choices at all. What they are is pro-abortion, which is exactly why any time a successful woman speaks about motherhood as a fulfilling role, the pro-abortion extremists get so angry.