The ACLU of Texas and ACLU National have filed a lawsuit against seven East Texas cities which have effectively outlawed abortion within their city limits by making their cities “sanctuary cities for the unborn.” So far, twelve Texas cities have voted to keep abortion out of their vicinities.

The ACLU claims the right to access abortion is a right protected by the United States Constitution and argues that the Sanctuary Cities for the Unborn ordinances are creating confusion about that right. The ACLU claims that their clients are called “criminal organizations” without having been charged with a crime and, because of this, the TEA Fund and the Lilith Fund are prohibited from “operating, speaking, and associating within these cities.” According to the ACLU, their Plaintiffs feel like they cannot clear up the “confusion created by the ordinances as to the legality of abortion services.” They claim the ordinances in these cities subject pro-choice organizations to “liability for carrying out their work,” accuse the ordinances as being too vague, and claim the ordinances “discriminate against Plaintiffs and others who support abortion access.”

Texas Right to Life has described the lawsuit as both desperate and baseless – “a hodgepodge of complaints at the court seeing what they can get to stick,” spokeswoman Kimberlyn Schwartz said. Right to Life of East Texas describes the lawsuit as a “meritless” one brought to deter and intimidate cities from enacting constitutional ordinances which are consistent with the laws of Texas.

Both Texas Right to Life and Right to Life of East Texas believe all seven pro-life ordinances will be upheld in court and are looking forward to standing with all seven cities. A legal team is ready to defend the Sanctuary Cities for the Unborn ordinances at no charge to the cities and is prepared to defend all other cities that enact these laws at no charge to taxpayers.

Waskom, Texas, was the first city to outlaw abortion in the nation and the first city mentioned in the lawsuit. Mayor Jesse Moore said, “When the City of Waskom passed the ordinance to outlaw abortions in the city, we knew we would likely end up with a lawsuit. The ACLU thinks this is something we did to get attention to the city, but they do not have a clue as to how wrong they are. We passed the ordinance because it was the right thing to do, and we will fight this lawsuit to the very end and then some.” 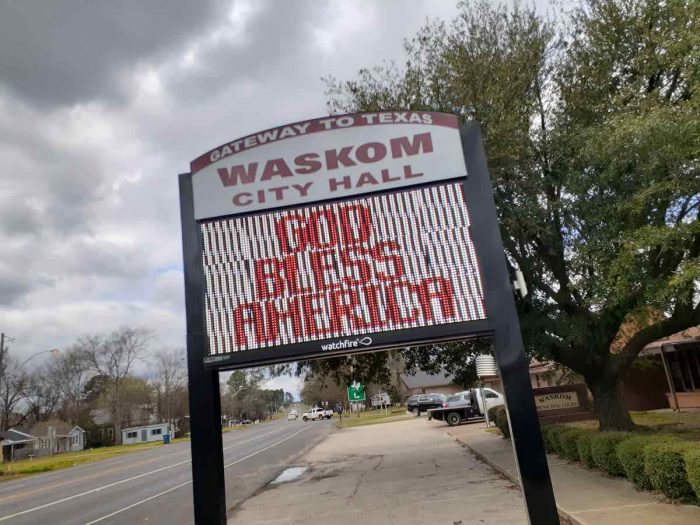 Naples was the third Texas city to outlaw abortion, and the second city named in the lawsuit. Naples Mayor David Betts said, “We have signed a letter retaining an attorney and we have not even been served yet.” Alyssa Browning, secretary for the city of Naples, added, “In Naples, we take pride in our high moral standing and values. We as a community were very proud to pass this ordinance and become the third sanctuary city for the unborn in East Texas. We intend to fight to protect this ordinance.”

Wells was the 12th Texas city to outlaw abortion in the nation and the seventh city mentioned in the lawsuit. Matt Myer, a councilman from Wells said, “The ACLU is not just going to intimidate us just because we are a small town. Everything I have seen in our community has shown that the people of Wells are glad to take on a lawsuit from the ACLU. Our community believes that defending the constitutional right of the unborn is a fight worth fighting. I have not heard one voice of dissent or opposition to this ordinance in our city.”

Melanie Pounds, a citizen of the city of Wells said, “We will stand up for this ordinance. We didn’t pass it lightly.”

More cities are expected to outlaw abortion within their boundaries in the weeks to come.

Mark Lee Dickson is a Director with Right to Life of East Texans, a Pastor of SovereignLOVE Church in Longview, Texas, and the founder of the Sanctuary Cities for the Unborn initiative.