As Rep. Alexandria Ocasio-Cortez and Sen. Ted Cruz had a Twitter debate about late-term abortion and fetal pain, an abortionist with ties to organizations directly funded by the abortion pill manufacturer and its investors weighed in. In his supposedly expert opinion, Dr. Daniel Grossman unscientifically claimed that “a fetus cannot perceive pain until the third trimester, 26 weeks” after Cruz asked AOC, “And at what age of gestation does science tell us that an unborn child feels physical pain?” 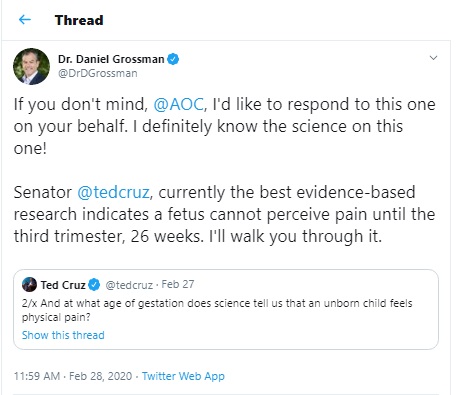 In the thread, Grossman – -who is a Senior Advisor at the Later Abortion Initiative — called the idea that a preborn child can feel pain “not based on science, just stigma [against abortion].” The Later Abortion Initiative is a project of Ibis Reproductive Health, funded by abortion investor the Packard Foundation and (as recently as January 2020) also funded by abortion pill manufacturer DANCO Laboratories.

But Grossman’s significant pro-abortion bias is showing. Here are the facts.

Grossman wrote, “A fetus could have a reflect reaction to a painful stimulus around 18 weeks, however the neural connections to the cerebral cortex do not exist to allow the fetus to perceive this as pain, and it’s unlikely until birth….”

The truth: Dr. Sheila Page, DO, president of the Texas Association of American Physicians and Surgeons and an expert in fetal pain, corrected Grossman’s claim by stating that “Reflexes can be elicited at 7.5 weeks.”

According to research compiled by the Charlotte Lozier Institute (CLI), the research and education institute of the pro-life Susan B. Anthony List, “The published scientific literature shows that unborn babies can experience pain at 20 weeks gestational age (20 weeks LMP, since Last Menstrual Period, the fetal age estimate used by most obstetricians) or earlier….”

The group adds, “A comprehensive review of the scientific literature including neural development, psychology of pain sensation, and moral implications of fetal pain, concludes that unborn babies may experience pain as early as 12 weeks. The review notes that neural connections from periphery to brain are functionally complete after 18 weeks.”

According to the UK’s Daily Mail, British professor Stuart Derbyshire — an abortion supporter who was once a consultant for  Planned Parenthood and other abortion advocacy groups — claimed in 2006 that there was “good evidence that fetuses cannot experience pain.” Today, while he still supports abortion, he believes — along with his American co-researcher, John C. Bockmann (who apparently does not share Derbyshire’s pro-abortion position) — that several studies call into question the current 24-week pain ‘consensus.’ 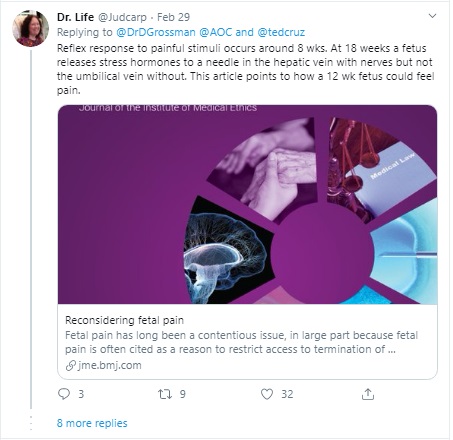 The authors summarize, “Here, more recent evidence calling into question the necessity of the cortex for pain and demonstrating functional thalamic connectivity into the subplate is used to argue that the neuroscience cannot definitively rule out fetal pain before 24 weeks. We consider the possibility that the mere experience of pain, without the capacity for self reflection, is morally significant.”

A blog post about the study from the authors reads in part, “We both agree, however, that different views regarding abortion should not influence open and frank discussion about the possibility of fetal pain. Scientific findings pertinent to the question of fetal pain, and philosophical discussion of the nature of pain, should be assessed independently of any views about the rights and wrongs of abortion.” 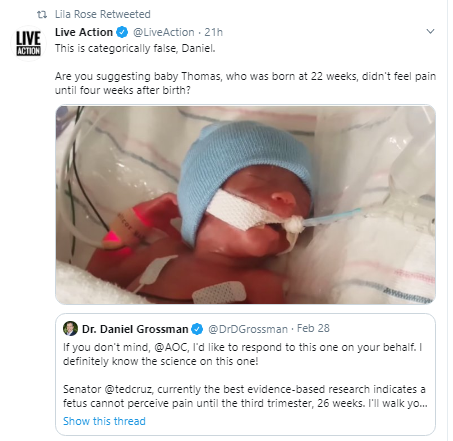 Dr. David Prentice, CLI’s Vice President and Research Director, noted in an op-ed,”Neonatologist Dr. Robin Pierucci points out that not only the preponderance of scientific evidence but also the vast experience of medical workers in the neonatal clinic make the existence of fetal pain undeniable.”

Pain perception is a function of lower brain centers. Neural connections do exist, but even so are not necessary for pain perception. There is no evidence of a pain perception center in the cortex, which continues to mature for 25 years after birth. The latest published review of the science behind pain perception in the developing human confirms that the cumulative works on the neuroscience related to pain perception in unborn children indicates that they are capable of feeling pain between 12 and 25 weeks gestation.

Grossman’s False Claim #2: Anesthesia in fetal surgery is only used to relax the mother’s uterus, not for fetal pain relief.

The truth: Many medical institutions are clear that anesthesia was used in fetal surgery to comfort both mother and preborn baby. For example, Children’s Hospital Colorado states, “Anesthesia also passes through the placenta to the unborn child, allowing the fetal surgery team to perform necessary procedures without causing pain or discomfort to the baby.”

Cincinnati Children’s is clear that, “In all cases, anesthesiologists are involved to provide for the comfort and safety of pregnant mothers and their babies.” 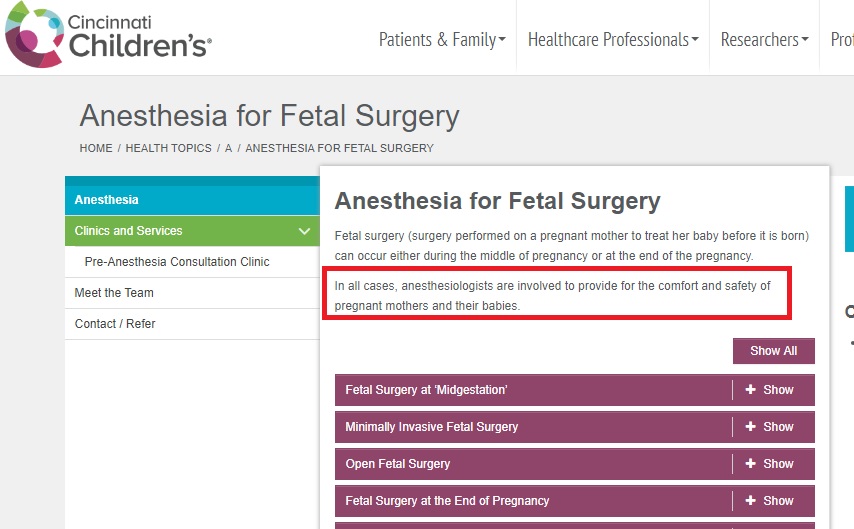 Although the problem of whether fetuses are able to feel pain or not is still controversial, experts at the University Hospital Virgen del Rocío in Seville have recently published a study in which they found that from the second trimester of pregnancy, the future baby already shows signs of pain when given a harmful stimulus or as a response to stress. The finding, the researchers argue, indicates the need to anesthetize the fetus during open fetal surgery, OFS.

There is a school of thought that believes that in the case of fetal interventions, it is sufficient to administer anesthesia to the mother as this passes through the fetus through the umbilical cord. Now, the experts have shown that this might not be sufficient and that from 21 weeks, the fetus can feel pain, so it also needs to be anesthetized.

The article went on to state, “… [I]n the opinion of these experts, direct administration is “obligatory” for [sic] reduce fetal stress and also release the incidence of fetal mortality…it is a confirmed fact that fetal mortality is higher than 20% in the case of non-anesthetized fetuses. This rate drops to 0% in operations carried out until now at the University Hospital Virgen del Rocío in Seville.”