Late-term abortionist LeRoy Carhart once admitted that preborn babies can sometimes be aborted alive and intact during vacuum aspiration or suction aspiration abortions. This violent surgical abortion process is generally committed in the first trimester and may sometimes be used even into the beginning of the second trimester of pregnancy.

According to former abortionist Dr. Anthony Levatino (seen in the video below), the preborn child’s body is generally dismembered or sucked apart during this procedure. Yet, testimony from Carhart in the 1997 Stenberg v. Carhart Supreme Court case revealed that even with the powerful suction mechanism, the preborn baby can shockingly sometimes come out intact and still alive.

The focus of the Stenberg case was Nebraska’s ban on the “partial-birth” abortion procedure (medically known as a D&X or intact D&E), committed later in gestation and often on healthy babies. Live Action News previously documented that even hardened abortionists and staff have expressed horror over the destructive and violent D&E dismemberment abortion procedure as well as the D&X. But testimony transcribed in the joint appendix for the Stenberg case also includes horrifying descriptions of first trimester and second trimester abortion procedures in which a suction D&C was utilized.

Carhart stated that “[a]t about the 12th or 13th week, we usually use curettage with vacuum aspiration up through the 15th, 16th week” of gestation (which would be 13-15 weeks post-fertilization).

But at another point in his testimony, Carhart suggested that the “14th to 15th week” was the latest he would use the curettage with vacuum aspiration procedure, because “[m]ost of the time by the 15th week, it doesn’t work.”

When that happens, Carhart testified that he must “use a mechanical forcep to actually grasp the fetus and remove it.”

The baby sometimes comes out alive

According to the memorandum and order by Judge Richard Kopf in U.S. District Court for the District of Nebraska, preborn babies may actually survive the suction abortion procedure and come out alive.

“The fetus is not dead before Carhart begins the vacuum aspiration procedure, and the entire fetus comes through the cannula alive in many instances,” the court document states.

Carhart acknowledged that he was able to determine whether the preborn child was alive before beginning the aspiration procedure, testifying the confirmation of life rules out a miscarriage that had already taken place. If no heartbeat was detected, he claimed he would “let the patients go, especially if they are on [sic] medicaid where they can receive this charge for free at a local hospital through their own provider…”

“If the fetus is alive and it’s within our gestation, again, we would continue,” the abortionist stated.

Carhart seemed to verify the fact that the baby could survive the abortion during testimony published in the joint appendix for the case where he was asked to identify the point in the vacuum aspiration procedure when the preborn child dies.

“Does it happen before you begin the procedure?” Carhart was asked.

His answer implies that the abortion industry knows the baby could come out alive, and as such, they appear to have another way to ensure the child’s death if that happens.

“[I]n our bottles that collect the specimens, we use a tissue that’s — I mean, we use a substance that detoxifies blood which kills all living cells, so once it arrives in that bottle, I would say that it dies very rapidly — but I think in the journey through the tube and through the tubing and the machine, not knowing if or when it died. I do know of physicians that have testified and physicians that have stated, and I have seen films of – or where they have done the studies, and they can actually show a viable fetus at six or seven weeks when it’s outside of the body,” Carhart said.

He clarified that by “viable,” he meant an “[a]ctually, currently living fetus… It’s absolutely not able to survive, but for a few seconds it could have a heartbeat or have other functions outside of the body.” 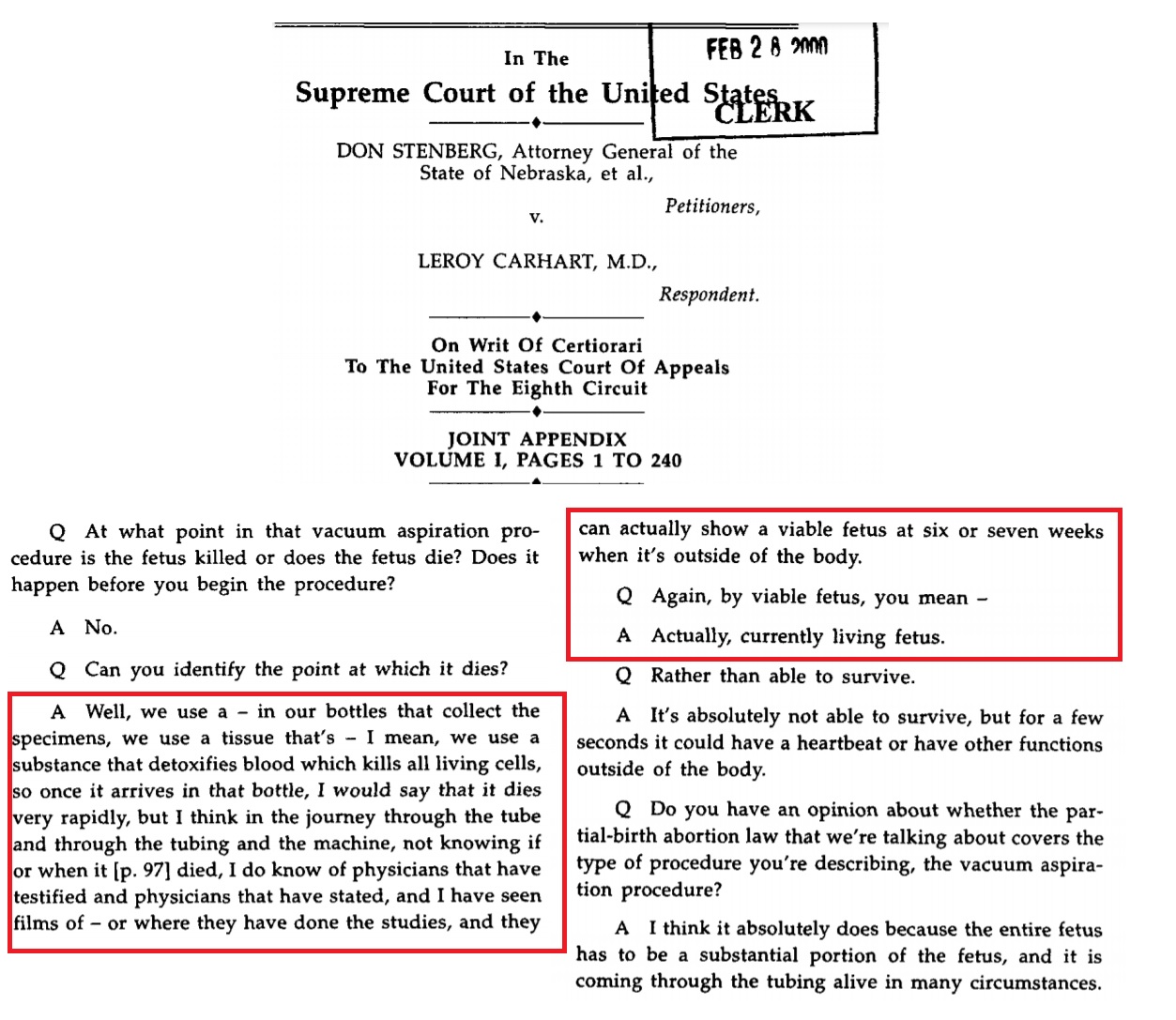 Preborn child will be either intact or dismembered

Carhart testified that when the vacuum aspiration procedure is used, a preborn child can come through the suction tube, or cannula, either intact or dismembered.

“We remove all the fetus either intact or just dismembered,” Carhart claimed.

Intact means the baby has been removed whole, and according to Carhart, that is something he claims he has no control over. “It’s whatever, when it comes through the tube. I have no – I have no governing effect on that,” he stated. 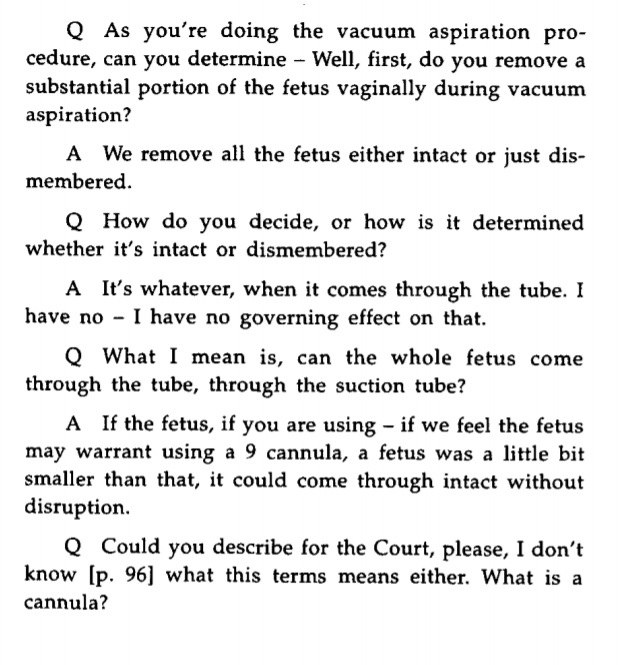 Carhart later suggested that the size of the cannula, which he described as a “tube” or “plastic curette” inserted into the uterus through the cervical os, may be a deciding factor on whether the child is whole or torn apart limb from limb.

“If the fetus, if you are using – if we feel the fetus may warrant using a 9 cannula, a fetus was a little bit smaller than that, it could come through intact without disruption,” he said.

For clarification, Carhart was asked, “So if that tube is sufficiently – If it’s larger than the fetus, the fetus may just be sucked out in one piece?”

According to the memorandum and order, Carhart uses curettage with vacuum aspiration from approximately the 12th through the 15th week of gestation. The court document notes how Carhart describes curettage as “a method of removing fetal debris, placental fragments, and potentially cancerous growths from the uterine wall, thereby reducing the risk of infection, greater bleeding, and passing fetal material into the mother’s bloodstream.”

The Stenberg memorandum and order also noted that Carhart uses cannulas ranging from 5 to 16 millimeters. The court document states that if the tube becomes clogged during this procedure, “Carhart must remove the tube to “de-clog” it, at which time the uterus will expel its contents into the vaginal cavity.”

Dehumanizing in order to kill

The ability to dehumanize the preborn child in the womb seems to explain the mindset of abortionists like Carhart.

During questioning, Carhart defined use of the phrase “unborn child” not in terms of treating a second patient as most OB-GYNs would, but as a political term that to him has “an inflammatory meaning.” He also defined a “living fetus” as one that is “viable” and “has a heartbeat” or is “undergoing normal genetic or normal embryonic development.”