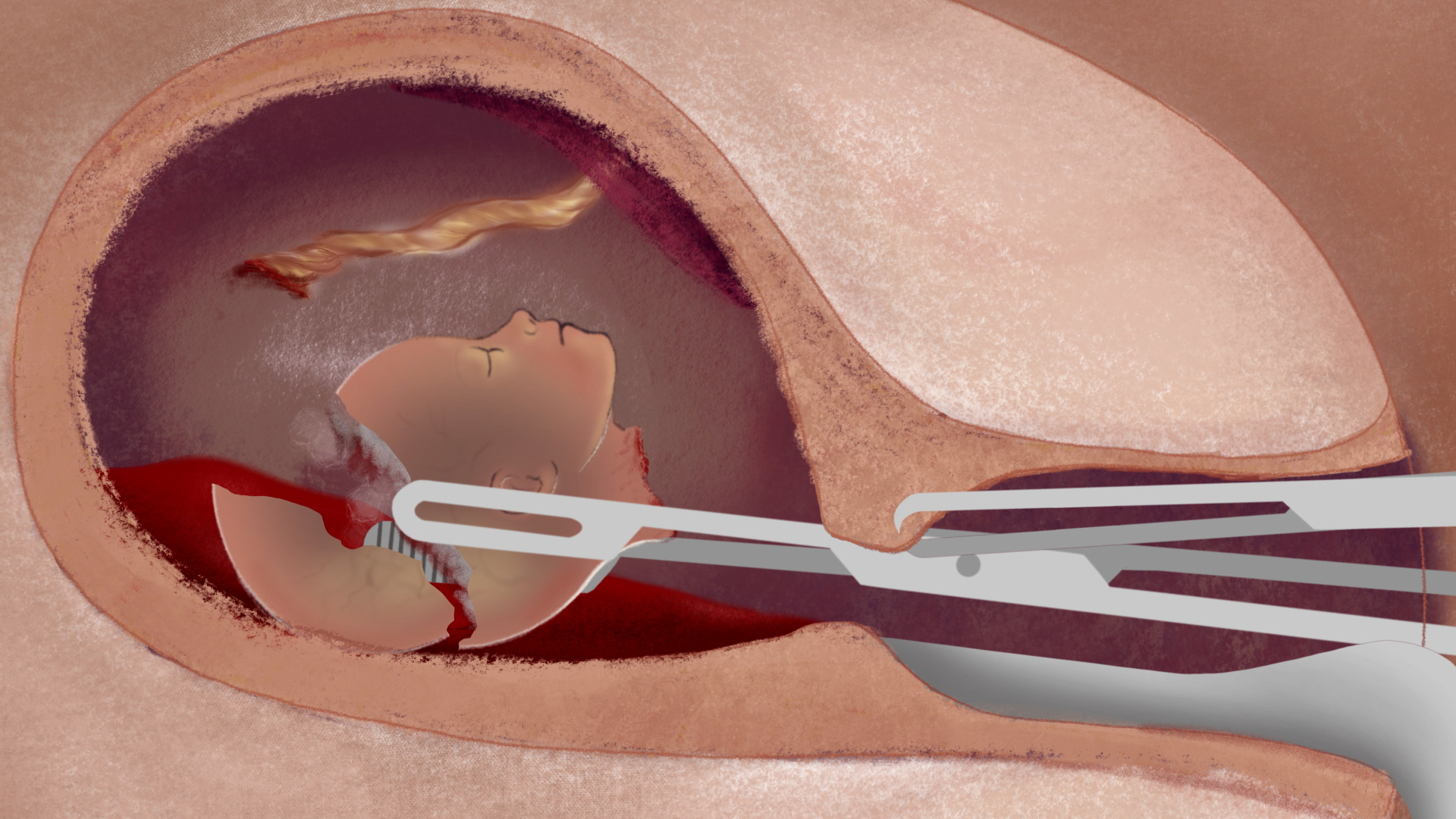 In a 2022 pro-abortion book, abortionist Marc Heller describes a second-trimester D&E abortion, in which the abortionist dismembers the baby with forceps and crushes her skull.

A former abortionist describes this specific procedure below:

In the book, Heller comments on how in a second-trimester abortion, “the creamy brain tissue pours onto the speculum,”2 and said:

I experience a mixture of horror and relief when I crush the skull of a second-trimester fetus, knowing that I will be able to safely complete the procedure, but also I will see the squashed face and bulging eyes of the baby I just killed.1

Although elsewhere in his essay, Heller refers to a preborn baby as just “potential life,” he uses the term “baby” here. Heller knows he violently kills babies.

Many abortionists have also used the word “baby,” when admitting what it is they do during an abortion.

Yet another abortionist said in an interview:

Second-trimester abortions…[are] much more difficult and riskier for the mom, hence the limited number of us who actually do them. They are also unpleasant, because the procedure (dilation and evacuation, D&E) involves pulling out the baby in pieces.

In a book about second-trimester abortion, another abortionist describes why he finds it difficult to be an abortionist, saying, “Killing a baby is not the way I want to think about myself.”

Yet another abortionist, John Parsons, has said, “A late termination is actually not very nice and there is no way of getting away from it, I don’t feel I am doing it for any other reason than for the best of both the mother and the baby.”

Late-term abortionist Dr. Leroy Carhart,  who commits abortions through the third trimester, told reporter Hilary Andersson of the BBC in a July 22, 2019 interview that he kills babies:

Carhart: To the fetus is makes no difference whether it’s born or not born. The baby has no input in this, as far as I’m concerned.

Hilary Andersson: But it’s interesting that you use the word baby because a lot of abortionists won’t use that. They’ll use the term fetus because they don’t want to acknowledge that there’s a life.

Carhart: I- I think that it is a baby and I tell our- I use it with the patients.

Hilary Andersson: And you don’t have a problem with killing a baby?

Carhart: (Pause) I have no problem if it’s in the mother’s uterus.

Abortions in the late second and third trimester are sometimes done by induction, during which the abortionist kills the baby with a lethal injection that causes cardiac arrest, and then induces labor.

A former abortionist describes this type of abortion below:

At a September 12, 2018, hearing in Brisbane, late-term abortionist Carol Portmann said, “Basically, for a late termination of pregnancy you just do not induce a baby: you must do a procedure where the baby passes away.”

Dr. George Tiller, who did thousands of abortions in the third trimester before his assassination in 2009 (an act of violence widely condemned by pro-lifers) made the following statement in an article in The Wichita Eagle. He was commenting on a disabled baby he aborted and said, “This baby looks pretty good, I’m sorry that the baby had a lot of problems. But it did.”

Tiller did abortions on many healthy third-trimester babies, but he also killed children who’d been diagnosed with disabilities or fatal conditions. He would take the aborted baby, wrap him or her in a blanket, and give the body to the woman or couple for them to say goodbye to their dead child, who would then be thrown in an incinerator.

While describing this “service” on his website, Dr. Tiller referred to the aborted child as a “baby” over 13 times. For example:

If you wish to see the baby, we call this an identification and separation encounter.

You have placed this baby in your life someplace and you simply have to start the process of saying goodbye.

Tiller knew he was killing babies.

“Euphemisms” and Seeing the Features of the “Baby”

I performed abortions, I have had an abortion and I am in favor of women having abortions when we choose to do so. But we should never disregard the fact that being pregnant means there is a baby growing inside of a woman, a baby whose life is ended.

Nobody wants to perform abortions after ten weeks because by then you see the features of the baby, hands, feet. It’s really barbaric…

I do them because I take the attitude that women are going to terminate babies and deserve the same kind of treatment as women who carry babies…I’ve done a couple thousand, and it turned into a significant financial boon…

Saline Abortions: “We don’t have to watch the baby die”

In the 1970s and early 80s, second-trimester abortions were done by injecting saline solution into the mother’s womb, which poisoned and burned the baby to death. These abortions are rarely done today because they were dangerous to the mother and led to so many live births.

Abortionist Dr. William B. Waddill, who commited abortions using saline said that saline causes “such a caustic and tremendously bad and hostile environment for the baby that it just creates an enormous destructive process.”

Waddill stood trial for strangling a 28-week-old baby girl who survived a saline abortion he committed.

Another abortionist Dr. William J. Sweeney III, said in his memoir, “The [saline] solution is lethal. It kills the baby in the womb.”

Finally, another abortionist said in the Oregon Journal, “If the abortion is well done, we don’t have to watch the baby die. So we inject a salt solution.”

All of these abortionists readily admit what most pro-abortion activists deny — that abortion kills a baby.