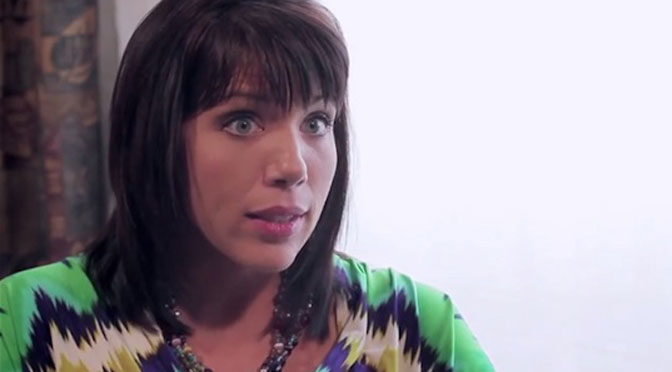 Saline abortion survivor Melissa Ohden, founder of the Abortion Survivors Network, is no stranger to being on the receiving end of insults from abortion advocates – which is why she expected more pushback at last week’s Senate Judiciary Hearings on late-term abortions and born-alive infants.

During the House Judiciary Committee hearings on Planned Parenthood last fall, Ohden testified in a much more hostile environment. In fact, Ohden told Live Action News that often, pro-abortion members of Congressional panels “don’t want to make eye contact with me. I’ve actually had legislators get up and leave the room before I testify. I’m prepared for that.”

But this time was different.

“I was expecting it to be a battle, and there wasn’t a lot of battle,” Ohden told Live Action News immediately following the hearing. “Truth very much prevailed – the truth about life, the truth about how children feel pain, the truth about abortion – and the other side simply did not have a lot to say about that.”

Compared to what she’s used to, the hearing was “a bit of a letdown,” Ohden said with a chuckle. “Today was nothing like I expected it to be. I truly believe there was not a lot that they could argue today. We had powerful testimony from folks who know about fetal pain and abortion laws internationally, and we had someone who performed abortions in the past and is now pro-life, and then you had someone like me who survived abortion.”

Seven people testified before the Committee last Tuesday; four of them were pro-life. Of the three who were pro-choice, Ohden says it was the testimony of pro-choice activist Christy Zink, a mother who aborted her child after 20 weeks due to fetal abnormality, which impacted her the most. This is because Ohden herself is the mother of a child with, in her words, “complex medical needs.” Ohden says:

I referenced the mother who aborted her child and said, ‘I know what it’s like to go into an ultrasound and get the news that our child is not perfectly healthy.’ We weren’t sure. My daughter was born with significant health issues, had several surgeries by five months old, had a feeding tube… I was able to share with them that I know what it’s like to walk in those shoes. Has my child suffered? Yes. But she is alive today, and God willing, my daughter will go on to live a normal life… but I’m not guaranteed that….

Nobody was expecting that story. I’ve been given multiple stories.

Every child is a gift, we know this. But that particular child – God gifted her to us for this particular purpose. She is a blessing.

As this pro-abortion testimony was the most impacting, what did Ohden think of the rest? “We heard a lot of, essentially, fear mongering” from the pro-abortion side, she says. “‘If abortion is banned after 22 weeks, women will be subjected to coat hangers and back alley abortion’ – that was the resounding theme from the other side.”

“What I heard from them today is same thing we’ve heard for 40 years – arguments based in fear,” she continued. “They go this route of trying to incite fear if abortion is restricted. They weren’t really able to back up those claims with anything credible. We were simply sharing the truth about life and abortion.”

Ohden believes something has changed since the release of the Center for Medical Progress’s videos last summer – that something bigger is beginning to happen. “I sensed that there was, overall, a lot of support for this [protecting preborn children]…. I feel like this hearing was part of the good that is happening.”

Part of that good is the release of several videos from Live Action featuring Dr. Anthony Levatino, a former abortionist, who explains abortion procedures in each trimester. These videos are changing minds, as more people are finding out what abortion is and what it does. The conversation is beginning to shift.

Thankfully, Melissa Ohden survived, and now she bears witness to the truth – that children in the womb are actual human beings who feel pain and who deserve the chance to live.

It’s time to protect them.