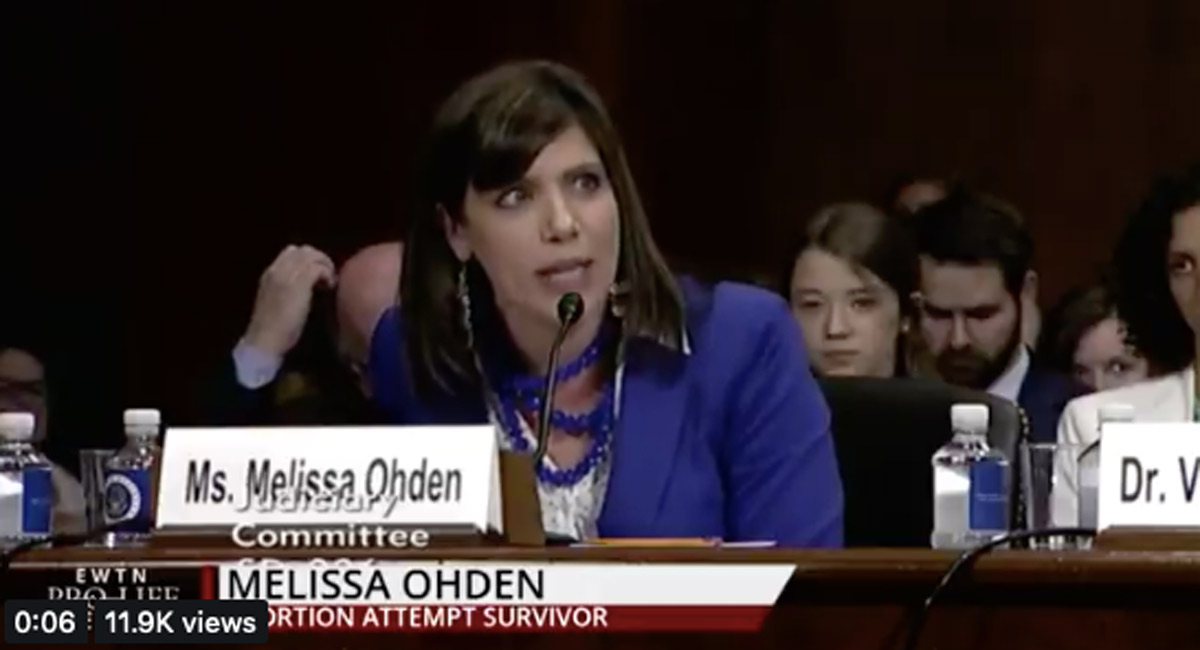 Tuesday’s Senate Judiciary Committee hearing featured powerful testimony from abortion survivor Melissa Ohden. The hearing was on the Pain-Capable Unborn Child Protection Act. During that same hearing — again, where Ohden had testified about the circumstances of her birth during an abortion — NARAL sent out a tweet, claiming that surviving an abortion was an “imaginary scenario[] and extremist lie[].”

Sen. Lee is now talking about Sasse’s so-called “born-alive” bill because of course he is. This bill is based on imaginary scenarios and extremist lies intended to inflame the public and interfere with private medical care. Newborns already have legal protections. #StopTheBans pic.twitter.com/57fw3Fod0X

Ohden explained to the committee, “My arrival into this world was not so much a birth, but an accident, a ‘live birth’ after a saline infusion abortion.” She continued, “My medical records actually state, ‘a saline infusion for an abortion was done, but was unsuccessful.’”

Addressing the abortion groups opposed to the Pain-Capable Unborn Child Protection Act, Ohden asked, “I hear all this talk about women’s rights, but I beg the question: Where were my rights in the womb? Where are the rights of the little girls who are going to lose their lives to abortion every single day? Where are my rights now as a woman who survived an abortion? Where are the rights of my daughters who never would have lived if that abortion would have succeeded in ending my life?”

Senator Mike Lee (R-Utah) responded to Ohden’s testimony, expressing dismay at the Senate’s failure to pass the Born-Alive Abortion Survivors Protection Act earlier this year. Lee said, “It’s stunning to consider that one of our nation’s two major political parties, a party that itself once said that abortion should be safe, legal, and rare, now almost uniformly opposes even minimal protections for babies outside the womb, babies who, like Miss Ohden, have survived an attempted abortion.”

But NARAL attacked Senator Lee, claiming the Born-Alive Abortion Survivors Protection Act was “based on imaginary scenarios and extremist lies intended to inflame the public and interfere with private medical care.” The pro-abortion pundits are either willfully ignorant or outright delusional. It is hard to believe that in the very same hearing that an abortion survivor testifies, pro-abortion lobbyists would claim that abortion survivors are “imaginary.”

Several other pro-abortion politicians and writers, including the president of Planned Parenthood, have claimed that there is “no such thing as an abortion survivor.”

Yet Ohden testified that she has been in contact with 281 abortion survivors through her group, the Abortion Survivors Network. And the Centers for Disease Control’s data actually supports Ohden’s claim, not those of pro-abortion groups. The CDC’s records show that at least 143 babies survived abortion between 2003 and 2014, and later died. The CDC says this number is likely underestimated.

So apparently, abortion survivors aren’t quite as “imaginary” as NARAL and Planned Parenthood claim.

The fact is that babies do sometimes survive a procedure that is intended to end their life. The existence of abortion survivors calls into question many of the false premises on which legal abortion is founded. If it didn’t, abortion groups wouldn’t be so determined to silence survivors and dismiss their real and traumatic experiences as “extremist lies.”