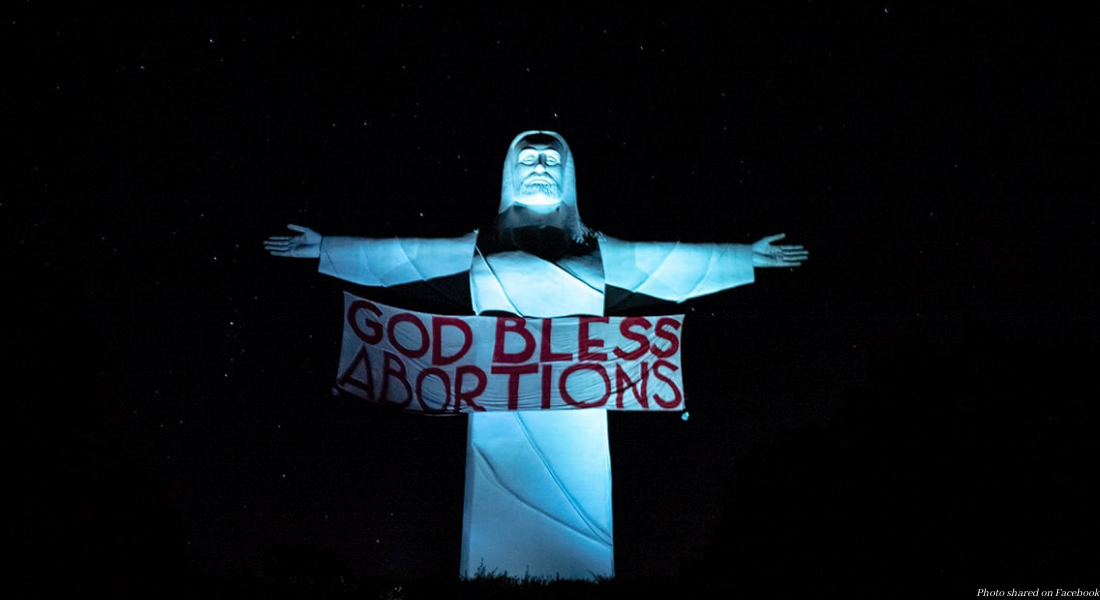 A banner reading “God bless abortions” was secretly hung on the Christ of the Ozarks statue in Arkansas under the cover of night, and a pro-abortion activist group has claimed credit.

The group Indecline, which describes itself as an “activist art collective,” told local media its members are responsible for the vandalism, dressing up as a construction crew and sneaking through a wooded area before scaling the statue. The group said its action was in response to a recent law passed in Arkansas that bans virtually all abortions. Planned Parenthood and the ACLU are currently suing to have the law overturned.

The statue, which is over 65 feet high, is the site of an annual performance of The Great Passion Play, and a response to the vandalism was posted on their Facebook page.

“You trespassed on our property and hung this drop cloth from the Christ of the Ozarks memorial statue and put your lives at risk as well as the people’s lives who took it down,” the post read. “You used our statue to further your platform, but we are thankful for the opportunity to share our mission. The Passion Play is a 501(c)(3) nonprofit organization dedicated to lifting up the miraculous life, sacrificial death, burial, and ultimately the resurrection of Jesus Christ.”

The Christ of the Ozarks monument is one of many monumental statues of Jesus around the world, the most famous of which is Christ the Redeemer in Rio de Janeiro, Brazil.

The Great Passion Play added that security will now be posted overnight at the Christ of the Ozarks statue to dissuade any more attempted vandalism. The cloth will also be repurposed as work cloths for church groups volunteering to do painting and restoration of the statue.

“It turns out Jesus, the always heretical, often misunderstood rabbi from Galilee has affirmed the gospel is actually pro-choice,” they tweeted, adding in a follow-up tweet, “Yes it’s real. So is Senate Bill 6. Any support can be directed to
@ARAbortionSppt. Miracles exist.”

The group then tagged numerous pro-abortion celebrities, oddly including Naya Rivera, the singer/actress who died last year saving her son from drowning.

Indecline previously engaged in activist vandalism earlier this year when its members defaced a Christian billboard with pro-Planned Parenthood graffiti. In that instance, the organization attacked Christian Aid Ministries, which has no programs involving abortion in any way; instead its services include delivering food, water, and supplies to people living in war-torn and impoverished countries, disaster response services, donated medicines from pharmaceutical companies for people in developing nations, help for people who are elderly or handicapped, and more.

“[I]n order to make a change and get people to pay attention, sometimes you have to take risks and we follow in the footsteps of a lot of our idols from civil rights to gay rights activists,” Indecline said in March. “We like to consider ourselves as creative checks and balances. Sometimes you need to go a little further to end up having a conversation.”