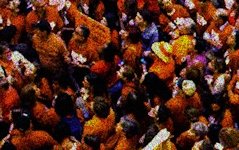 Time to admit the truth.

Abortion advocates would love America to believe that it’s who they are fighting for, that they are fighting for women and a woman’s right to choose an abortion. But abortion advocates have come to show that with the lack of common sense and blind support for abortion that they have, it’s really what they support. And that is abortion, oftentimes up to and even after birth.

It would seem that when abortion advocates fight for abortion tooth and nail and say that they are supporting women, they are actually the ones taking advantage of women. They are just using women, and using their reproductive function of conceiving children, to represent some sort of “choice.” That choice is really the cruel dismemberment or poisoning of children with nothing but the intent to kill them. It’s almost funny how pro-abortion organizations or individuals hardly ever use the word “abortion,” because deep down, they know how divisive it is, but also how downright unpleasant. So, instead of fighting for abortion, they say that they’re fighting for women.

We’ve written quite a bit about Wendy Davis and her filibuster here at Live Action News these past few days. In writing why “Wendy Davis isn’t a Hero,” Cassy Fiano refers to the state senator’s comments from Thursday’s “CBS Morning,” in which she makes it a point to say that she was speaking for women. And even though the bill which Davis filibustered, SB5, would have passed because of its 19 votes and died only because of the time in which the vote took place, Davis is either deluded enough, or so beholden to abortion, to think that she actually represents Texas values. Not only are such abortion advocates so blindly in support of abortion, but they also don’t understand math, it seems.

This is what Wendy Davis, who herself was a teen mother, had to say in response to comments from Governor Rick Perry, who pointed out that it’s “just unfortunate that she hasn’t learned from her own example that every life must be given a chance to realize its full potential and that every life matters”:

Rick Perry’s statement is without dignity and tarnishes the high office he holds,” she said. “They are small words that reflect a dark and negative point of view. Our governor should reflect our Texas values. Sadly, Gov. Perry fails that test.”

Nice try, Wendy, but the governor does reflect Texas values. Again, the bill died not because it didn’t have enough votes, which it did. It died because a mob, so angry that abortion was going to be restricted in any way, shape, or form, decided to cause a disruption so that a vote could not be taken on time. With the 19 votes SB5 received, we can say that “Texas values” are those that restrict abortion in such a way that SB5 does, which is through commonsense regulations. So the governor actually did “reflect … Texas values” when he called for another special session to give SB5 another chance to pass,  so that the will of the people can be heard. What’s sad is that Wendy Davis and a host of other abortion advocates have to lie and pretend that their values are “Texas values.”

Kristi Burton Brown has also just written a worthy analysis as to how the nation really is not as behind Wendy Davis as abortion advocates would like to believe. In fact, more support a 20-week ban on abortion than oppose it.

Such fuss has been the case not only in Texas, but in Michigan as well. H.B. 5711 was sent to and passed by Governor Rick Snyder, but not without unnecessary fanfare from adult abortion advocates who threw a fit like children about not getting their way. Much commotion was caused there, for a similar omnibus of pro-life laws. Word got out that State Rep. Lisa Brown was censured – some would say simply because she said the word “vagina,” though all of what she said was really not that simple, and definitely not appropriate. And once again, the pro-abortion side responded by causing a scene. In this case, it was by performing a version of the extremely vulgar play The Vagina Monologues.

What laws were State Rep. Lisa Brown, Planned Parenthood, and playwright Eve Ensler making such a fuss about for being anti-women? Let’s take a look:

2. Require abortion clinics to screen women to determine if they are being coerced into the abortion.

4. Require the humane disposition of the bodies of aborted babies.

5. Makes it a crime and establishes penalties for those who coerce women into an abortion.

For politicians who claim that such a bill is anti-women, who are women themselves, it is entirely possible that they didn’t even read it. They just knew enough about it restricting abortion, and by God, if it restricted abortion, in any way, it must be anti-woman. How can you oppose laws 2 and 5 especially and say you’re pro-woman? Coerced abortions aren’t a choice at all. If you do, you’re really just lying to yourself.

And for state abortion laws that do pass, groups like Planned Parenthood are there to sue. Now, Roe v. Wade may be one of the worst court cases ever decided in our nation’s history, but abortion advocates really are abusing the concept of an “undue burden.” For such people and groups, it seems to be anything that restricts abortion, in any way, for any reason.

What seems especially cruel to oppose is informed consent laws or waiting periods. Don’t abortion advocates claim to support women and their choices? Well, they can’t really do that when they oppose laws that provide women with the risks associated with abortion or make sure that they spend time considering their options before making one of the most permanent decisions of their lives.

Last summer, Live Action News wrote many pieces on a lawsuit from Planned Parenthood against South Dakota for its informed consent laws. As I wrote last summer, here was the reason given:

An article from Reuters, dated the day after the decision was made, mentions that  ”Planned Parenthood had contented the suicide advisory imposes an undue burden on abortion rights and violates the free speech rights of the physician.”

Apparently “the free speech rights of the physician” are more important than the patient’s safety. Of course, Planned Parenthood doesn’t want women to know the truth about abortions, because then they might not actually want to get an abortion.

And regardless as to if we’re talking about licensing and inspecting abortion clinics, or requiring abortionists to have privileges at hospitals, or providing women with all necessary information, how is any of that anti-women? It’s not; it’s anti-abortion. Abortion advocates try to circumvent the law so as to hide the truth of what abortion really is. And they do so while hiding behind women in order to gain support for the evil they are fighting for, which they thrust upon vulnerable women.

I don’t support abortion. I just don’t, and I never could. But those who do don’t make it any easier to have a civil discussion when they cause a scene and deceive the people, when they act like they’ve won through honest means, when they pretend the truth of the matter is on their side when it’s not. Abortion advocates are not pro-woman, not really. If they were, they would understand how such commonsense abortion laws are what really help women. Instead, they’re pro-abortion. Many of us already know that, but it would be nice if abortion advocates stopped deceiving the American people and admitted the truth about what they’re really fighting for.