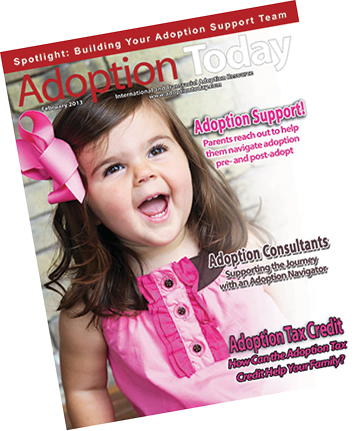 Adoption is awesome. Time to start talking about it.

Adoption is all too rarely talked about as an option for pregnant women. Planned Parenthood and other such pro-abortion organizations seem to barely recognize its existence. And many people today have a rather ancient view of adoption.

Years ago, when adoption was chosen, a baby was often whisked away after birth – sometimes never even seen or held by his mother – and given to the adoptive family. The birth mother (and father) almost never had any contact, after birth, with the baby or the adoptive family. There was little way to know about anything going on in the child’s life. The most a birth mother could hope for was that, one day, her child would choose to open the records, find her name, and contact her after reaching adulthood. Many children chose never to do that.

Adoption today is different by light-years from all that. And we need to do a better job of informing women – and men – of all the options available in adoption. For those who desire no contact with their child or the adoptive family after birth, there are closed adoptions. The names of the birth parents can still be kept secret, but now it’s a choice, not what must be. Closed adoptions can be arranged so that the birth parents’ names are revealed when the child reaches the age of eighteen, or they can result in names that are never revealed. Almost anything is an option.

There are also open adoptions. This kind of adoption is tailor-made with a plan that fits both family’s needs. Birth parents can choose to have pictures and letters sent to them. They can even choose to be a part of their child’s life. There are so many options in open and partially open adoptions. Many women seem to be unaware that these options and choices even exist.

Another big concern with adoption is who the adoptive parents will be. Countless women do not want to place their children somewhere out there in the world and always wonder whom they ended up with and what the families are like. Today’s adoption world has fixed this dilemma. Birth parents can handpick just the right adoptive parents for their precious child. They can interview them, meet them in person, go through files and files of prospective parents, get their medical expenses paid for, and so much more.

Today, adoption is a beautiful, workable, and very accesible option. We need to do a better job of painting an accurate picture of adoption. Pro-lifers ought to research adoption and be aware of the facts so they are well-equipped to explain this life-giving choice. This adoption site offers a list of common questions about adoption and well-thought out answers.

We should also learn the stories of people who were adopted. Here are nine you should hear – each beautiful and unique in its own way: 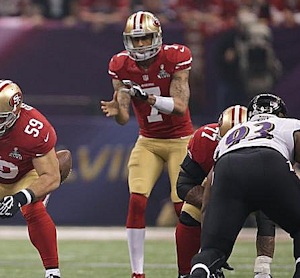 While Colin Kapernick was already well-known and discussed in the sports world, he became even more famous as the 49ers quarterback in the Super Bowl this year. Though he didn’t manage to lead his team to victory, Kaepernick will undoubtedly be watched in the years to come, as his career has only begun. His boldness in displaying his favorite Scripture verses (Psalm 27:3, for one – “Though an army besiege me, my heart will not fear though war break out against me, even then I will be confident.”) is only one thing Kaepernick’s bold about.

He also has a voice for adoption. His single birth mother cared for him during the first five weeks of his life, until she was certain that she had found the perfect couple for her new son. She specifically chose them for several reasons, including their love of sports. On national television, Kaepernick proclaimed that being adopted was the “biggest blessing” of his “entire life.”

With someone so young and so bold in the limelight, it’s a good day to talk about adoption in America.

2.   Michael Oher, NFL lineman and subject of the acclaimed movie The Blind Side

Along with many of his Baltimore Ravens teammates, Michael Oher won his first Super Bowl earlier this year. Known best from the portrayal of his life in The Blind Side, Michael Oher is a football star and an adoptee. His story is unusual, though, as he was adopted as a practically homeless teen. His adopted family, as well as Sandra Bullock and her adopted son, were at the game to cheer Oher on to victory. Oher’s adoptive mother, Leigh Anne Tuohy, put her heart into words:

‘Families don’t have to match,’ she said. ‘You don’t have to look like someone else to love them. There are wonderful kids all over this country who need a forever family. And we believe there are no unwanted kids, just unfound families.’

Steve Jobs’s adoption seemed to become especially newsworthy as his death approached. Millions of Americans mourned the death of this creative innovator and powerful CEO. Yet Jobs would never have had his chance at revolutionizing technology had his birth mother not given him the gift of life.

Jobs was born before abortion was legal throughout the nation, yet many women still sought out the procedure. Jobs’s mother chose differently and placed her baby boy with a family who would raise him and encourage his inventiveness. Steve Jobs’s adoption became a public blessing that the whole world witnessed.

Faith Hill was adopted just days after her birth by a Mississippi couple with two biological sons. Her song “Mississippi Girl” pays tribute to a childhood she calls “amazing.” Despite having a great childhood, Hill hadn’t always been told the truth about her adoption, and as a young woman, she went on a journey to find her birth mother. Hill related her feelings:

‘I have a lot of respect for my birth mother and no feelings of anger or any of that,’ she has said. ‘I know she must have had a lot of love for me to want to give me what she felt was a better chance.’

Dave Thomas was adopted at birth and had already begun working in the restaurant business before he had finished high school. Adoption was such a blessing in Thomas’s life that he returned the favor, thousands of times over. The Dave Thomas Foundation for Adoption and Wendy’s Wonderful Kids (which specifically serves kids currently in foster care) has helped over 3,400 children get adopted.

Recently released research from a five-year evaluation of Wendy’s Wonderful Kids shows that children referred to the program are up to three times more likely to get adopted.

Wendy’s also sponsors “A Home for the Holidays,” a CBS special that airs every year at Christmas and helps children get placed in adoptive families.

Foxx’s story differs from the others mentioned here because he was adopted by his grandparents after his parents divorced. Yet Foxx’s adoption was no less significant or eventful. He has been quite vocal about the life lessons his beloved grandmother (also his adoptive mother) taught him. Foxx has appeared on “A Home for the Holidays” and is outspoken about the need for adoption in the U.S.:

‘I could take you to some parts of the U.S. and you’d see kids and families in exactly the same bad situations (as in third-world regions) who need your help,’ he says. ‘We have to start at home. There are too many sick kids, orphaned kids, kids who have never gotten to open a Christmas present, right in our own backyard.’

7.   John Hancock, signer of the Declaration of Independence, governor, and president of Congress

John Hancock, born more than two centuries before Jamie Foxx, was also adopted by a family member. After the death of Hancock’s father, his uncle chose to raise him as his own son and provided the young man with plentiful opportunities. Hancock clearly went on to lead a successful life of leadership, becoming one of the greatest political leaders and Founding Fathers of America.

Rodney Atkins’s story truly deserves to be told. His birth mother became pregnant with him after “a traumatic first date,” but she still chose to give life to her son. Despite her personal circumstances, his mother focused on the new life within her and placed her baby in an orphanage. You can read Atkins’s full story here, in an article I wrote last year:

Indeed, Atkins has not been taking the gift he was given for granted. He has used his platform as a country musician to step into the role of a spokesman for the National Council for Adoption. He has chosen to speak out so that other children might be given the same chance he was given and so that other mothers might make the same sacrifice that his made. In the AP article, Atkins recognized his birth mother’s courage and said that he could never give back to her as much as she gave to him.

In addition, Atkins has used his music career to raise $5,000,000 for the children’s home he lived at before his adoption. His own website tells about his involvement in the lives of the home’s needy children.

Beautiful Makenna, on the cover of Adoption Today

Makenna’s story is both beautiful and unique. This precious child is a “Snowflake baby.” Adopted as an embryo, Makenna was implanted into the womb of her adoptive mother and born nine months later. This month, she was featured on the cover of Adoption Today. Snowflake adoption is being brought to light these days, as more and more babies are being adopted from IVF clinics and born into new families. Nightlight Christian Adoptions is on the forefront of this modern adoption choice, and you can read more here.