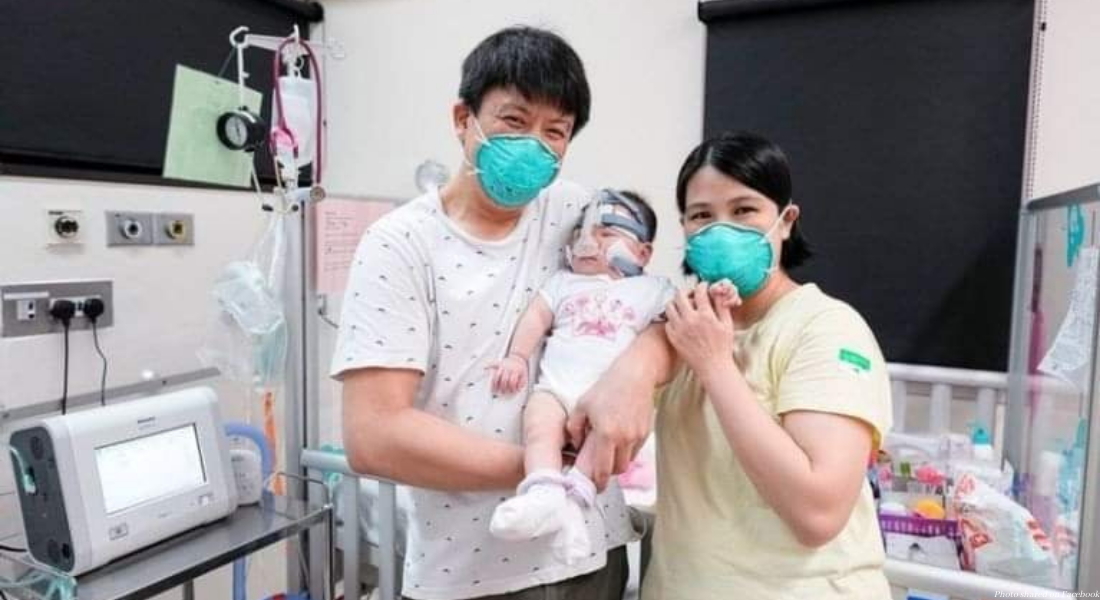 A premature baby thought to be the smallest to ever survive is finally going home, after spending over a year in the hospital. Kwek Yu Xuan was born in Singapore in June of 2020, but she was nearly four months early at just under 25 weeks gestation. She was a tiny preemie, weighing a mere 7.5 ounces at birth, which is roughly the weight of an apple.

Yu Xuan’s mother underwent an emergency C-section after developing pre-eclampsia, a condition that causes dangerously high blood pressure, and which can be fatal for both mother and baby. Zhang Suhe, an advanced practice neonatology nurse at the National University Hospital, was shocked when she saw Yu Xuan for the first time.

“I was shocked so I spoke to the professor and asked if he could believe it,” she said to the Straits Times. “In my 22 years of being a nurse, I haven’t seen such a small newborn baby.”

Yu Xuan’s parents, Kwek Wee Liang and Wong Mei Ling, are permanent residents of Singapore, but had been planning to return to Malaysia for the delivery, where their four-year-old son is currently living with his grandparents. But when Wong began having extreme abdominal pain, there was no choice.

“I didn’t expect to give birth so quickly, and we were very sad that Yu Xuan was born so small,” Wong told the Straits Times. “But due to my condition, we didn’t have a choice. We could just hope that she would continue to grow.”

Though babies born at nearly 25 weeks gestation have a very good chance of survival, especially if given active care, Yu Xuan was an unusual case because of her small size. Her skin was also extremely fragile, and her lungs weren’t fully developed. Even something as small as leaving a probe on her skin for too long would lead to an open sore, and possible infection. Dr. Yvonne Ng, one of the neonatologists who worked with Yu Xuan in the NICU, explained to the Straits Times how difficult it was for the staff to help keep her alive.

“Her daily care was the main crux of the matter, especially for the first two weeks of life,” she said. “We needed to innovate and find some improvised methods to deal with a baby this small because this is the first time we experienced somebody this tiny. She was so small that even the calculation for the medication had to be down to the decimal points.”

Even something as seemingly simple as a diaper was difficult for staff, as newborn diapers were far too big for her. And vendors which provided them for micro-preemies wouldn’t deliver to Singapore. So NICU staff had to create them from scratch themselves.

“There are some chemicals in the diaper to absorb the baby’s urine, and this can’t come into direct contact with Yu Xuan’s skin,” Zhang said. “So we had to fold and seal the edges… these are the things we had to do for her, because caring for her skin is very, very important.”

Despite her tiny size, Yu Xuan showed incredible personality from the beginning, responding when nurses spoke to her and remaining happy despite the difficult environment. Now 14 months old, Yu Xuan still has chronic lung disease, but she weighs 14 pounds and is healthy enough to go home.

“Baby Yu Xuan was just 212gms – barely the weight of a large apple – when she was delivered via emergency C-section in June last year. After 13 months in our Neonatal Intensive Care Unit, baby Yu Xuan was discharged home well. She is likely the world’s lightest baby to have survived a premature birth,” the hospital said in a statement. “We are happy for the little fighter and her family, and proud of the care provided by our team. Our best wishes to Little Yu Xuan as she continues to grow, thrive, and beat the odds every day.”

For Yu Xuan’s parents, the generosity and care of Yu Xuan’s medical team is something they’ll never forget. “I have to thank the nurses for taking care of her for such a long time, they really took very good care of her,” Wong said. “We were very happy that everyone could come for her discharge. The team is like (family).”