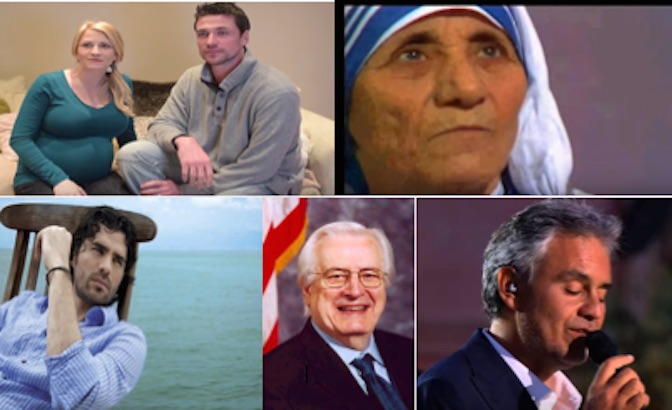 This year, as we march for life, voices around the world join ours in crying out for life. We cry out for every life, from womb to tomb, to be celebrated. We push on the ceiling to be lifted until the light of dawn will shine on every new life. And across the globe, world celebrities continue to speak out about the tragedy of abortion. Meet five of them – an actor, an Olympian, a politician, a humanitarian, and a musician – and hear their stories.

Verastegui became well-known in the U.S. for his part in Bella. But even before that, he was a beloved celebrity in his home country. Eduardo has used his fame to reach mothers and fathers considering abortions, and has personally stood outside abortion clinics, kindly speaking to people going inside.

Not knowing of the animosity abortion businesses have towards pro-life advocates, he decided to go to a local abortion facility to learn more about what really happens inside. What occurred, he says, changed his life forever.

“I decided to go to an abortion center to see if I could learn more about what women think and feel when faced with a crisis pregnancy,” he said.

Outside, he met a Hispanic couple considering an abortion and he was able to speak with them in their native Spanish for 45 minutes. He offered them hope, help, encouragement and his phone number.

“Several months later,” Eduardo continues, “I received a phone call from the man I met with the pregnant lady in front of the abortion center.”

“He said, ‘Hello Eduardo – this is Javier, and I have great news. My boy was born yesterday! I want to thank you and ask your permission – I would like to name him, Eduardo,’” the man told him.

“I just put the phone down – I couldn’t even talk,” Eduardo says.

Eduardo’s video, Dura Realidad, has been used outside of abortion clinics to save lives. (Here is the story of one woman who changed her mind, exclaiming, “I can’t do that to my baby,” after watching the video.)

Dura Realidad is available with English subtitles here. Eduardo is also behind the IAmViable website, which celebrates the value of individuals with disabilities, and he was a producer of Crescendo, an internationally acclaimed short film.

In late 2014, Halsey and her husband Steve (a former pro rugby player), were surprised to discover they were expecting triplets. Doctors advised the couple to “terminate” two of their small daughters. The doctors told the Halseys that their babies were at risk of Intrauterine Growth Restriction (see the story of a girl born with that condition here) and that Jaime’s health was also in question.

My initial emotional reaction was “I can’t do that. I will keep them all and carry on with the pregnancy whatever.” … Other people have triplets and I wasn’t prepared to abort two healthy babies just to make life easier.

We never thought about terminating two of the babies for a second…We want to bring all three of them into our happy family.

Almost exactly eleven months ago, on February 24, 2015, three beautiful little girls – Eden, Amber, and Erin – were safely born to the Halseys. Jaime was beside herself with joy and, with Steve, celebrated their choice for life.

I will always remember that feeling—a mixture of happiness, love and proudness in myself for being able to carry them in my tummy for so long and to now be hearing their little cries for the first time, just amazing! Hyde was very outspoken about the need – and our responsibility – to protect innocent preborn children. The Hyde Amendment is named after him.

In a 1996 speech to Congress, where he passionately attempted to persuade his colleagues to override President Clinton’s veto of the Partial-Birth Abortion Ban, Hyde explained how he wanted to face God one day:

I am not the least embarrassed to say that I believe one day each of us will be called upon to render an account for what we have done, and maybe more importantly, what we fail to do in our lifetime, and while I believe in a merciful God, I believe in a just God, and I would be terrified at the thought of having to explain at the final judgment why I stood unmoved while Herod’s slaughter of the innocents was being reenacted here in my own country. A story is told of the humble nun and the Democrat woman who would be president:

“Why do you think we haven’t had a woman as president yet?” First Lady Hillary Rodham Clinton asked her guest over their lunch at the White House.

The little woman sitting at table with Mrs. Clinton did not hesitate in her reply.

“Because she has probably been aborted,” said Mother Teresa.

At the 1994 National Prayer Breakfast, attended by both President Bill Clinton and then First Lady Hillary Clinton, Mother Teresa spoke these words:

I feel that the greatest destroyer of peace today is abortion, because it is a war against the child, a direct killing of the innocent child, murder by the mother herself. And if we accept that a mother can kill even her own child, how can we tell other people not to kill one another? How do we persuade a woman not to have an abortion? As always, we must persuade her with love and we remind ourselves that love means to be willing to give until it hurts… Any country that accepts abortion is not teaching its people to love, but to use any violence to get what they want. This is why the greatest destroyer of love and peace is abortion. …

I will tell you something beautiful. We are fighting abortion by adoption—by care of the mother and adoption for her baby… Please don’t kill the child. I want the child. Please give me the child. I am willing to accept any child who would be aborted and to give that child to a married couple who will love the child and be loved by the child. From our children’s home in Calcutta alone, we have saved over 3,000 children from abortion. These children have brought such love and joy to their adopting parents and have grown up so full of love and joy.