The March for Life in Argentina was held online on May 30th and drew hundreds of thousands of participants.  The event, which took place virtually due to social distancing measures to prevent the spread of COVID-19, had more than 390,000 attendees on Facebook alone, according to the Catholic News Agency. The event lasted for two hours on Facebook and YouTube.

This year’s March for Life comes months after Argentina’s President Alberto Fernández pushed legislation to legalize elective abortion in the strongly pro-life country. The president, who describes himself as an abortion “activist,” pushed the legislation fulfilling a vow he made when he abruptly reversed his position on legalizing abortion shortly before taking office. The president’s efforts were postponed due to the outbreak of COVID-19, but before the bill was put on hold due to the pandemic, many Argentinians expressed their opposition. A pro-life mass at the Basilica of Our Lady of Lujan brought an estimated 100,000 people together. 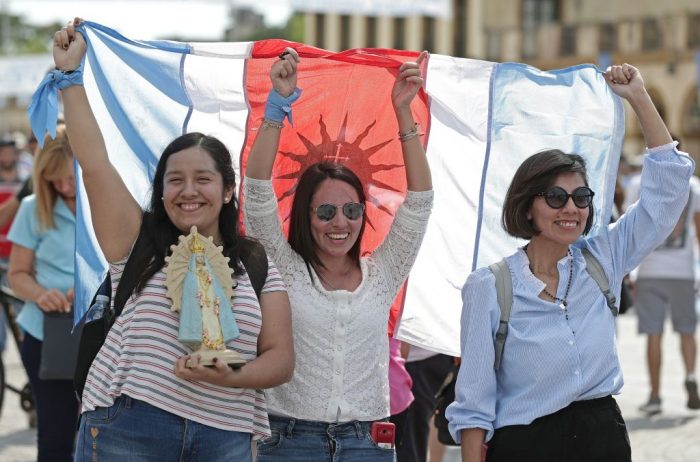 Faithful attend a mass prayer celebrated by the Argentine Catholic Church in rejection of the bill proposed by President Alberto Fernandez that decriminalizes abortion, outside the Basilica of the Virgin of Lujan, in Lujan, on the outskirts of Buenos Aires, on March 8, 2020. (Photo by Alejandro PAGNI / AFP) (Photo by ALEJANDRO PAGNI/AFP via Getty Images)

In 2018, pro-abortion forces, aided by international abortion groups, tried and failed to push through the legalization of elective abortion. Senator Silvia Elías de Pérez, a pro-life leader in the country’s legislature, told CNA that “today’s march has been very positive.” She noted that the 2018 legislation failed, in part, because “a huge number of Argentinians … throughout the country came out to defend their ideas, their rights, to say that in Argentina every life matters and that being born in Argentina should not be a right only for those who are wanted.”

Elías de Pérez also said, “it is extremely sad, dramatic, that in the midst of a worldwide pandemic, in which we are fighting for people’s lives, it still occurs to a government to send [to the legislature] this kind of anti-life initiative.”

During the pandemic, other pro-life events that went online also celebrated large attendance.  One of the events for Canada’s virtual March for Life caused the website to crash due to the volume of traffic.