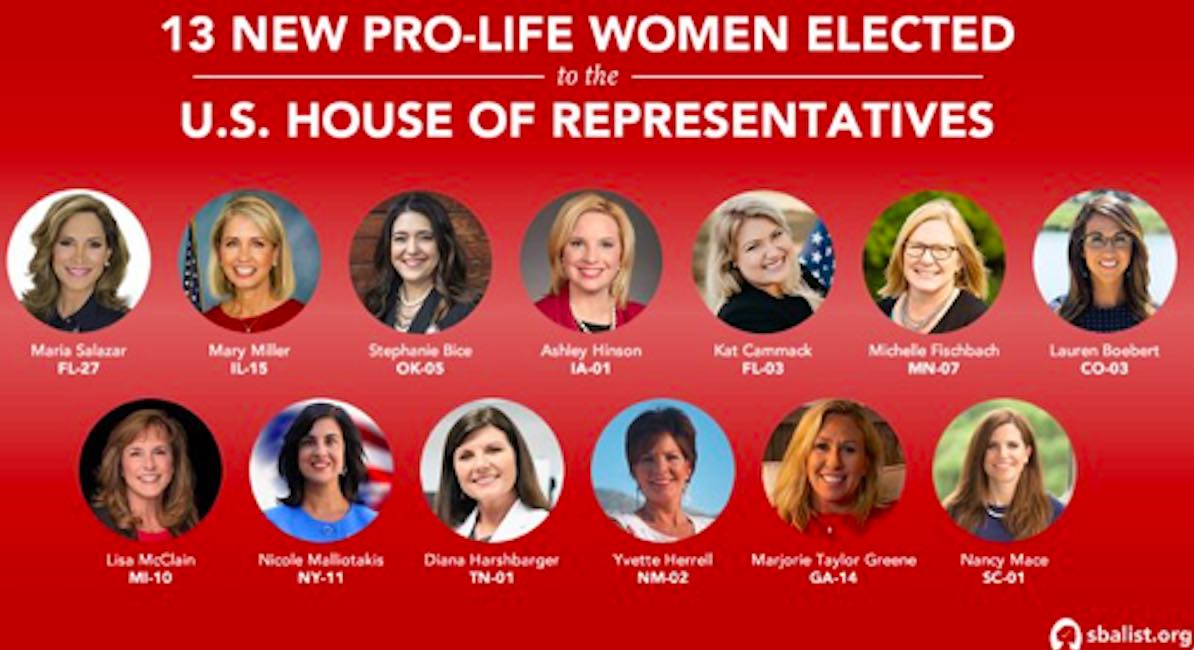 UPDATE, 3/22/21: The wife of the late Congressman Luke Letlow has vowed to “carry the torch” in honor of him after winning a special election this weekend to fulfill his term after he died in December at age 41 from COVID-19 before being sworn into office.

Julia Letlow won the seat for Louisiana’s 5th Congressional District, claiming more than 60% of the vote. She is the third woman ever elected to the U.S. House of Representatives from Louisiana and the first Republican woman. She is also the only woman currently serving in the House from that state, according to ABC News, and is now the 18th pro-life woman elected this term.

UPDATE, 11/25/20: The number of pro-life women elected to congress in the 2020 elections now stands at 17. According to the Daily Caller, Young Kim (CA) defeated her incumbent opponent to become the 17th pro-life woman to win her race in this election cycle.

Nine out of the 17 women elected in 2020 have flipped seats that were previously held by pro-abortion Democrat incumbents, according to the pro-life Susan B. Anthony List.

UPDATE, 11/16/20: The Washington Post reported that the number of pro-life women elected to the House continues to grow. “Pending the outcome of a few more races, antiabortion women in the House will more than double their ranks, from holding just 13 seats now to perhaps as many as 30 seats next year,” wrote the Post. In addition, CNS News reports that the number currently stands at 16, up from the originally reported 13, with potentially more to be added:

The number of new, pro-life Republican women elected to the House of Representatives has climbed further, and now stands at 16, with the possibility of three more joining the group.

Of the three undecided races, one is being held up by legal wrangling, and in the other two the Republican candidates are leading by slim margins – in one case, by a razor-thin margin.

Along with 11 incumbent pro-life Republican women who won re-election last week, the victories thus far take to 27 the number of pro-life women in the House…

As reported earlier, a record number of 14 new Republican women, all with pro-life views, won House races in last Tuesday’s election. A diverse group, the newcomers include Cuban-Americans, a member of the Cherokee Nation, and the first Iranian American elected to Congress.

11/5/20: As the votes continued to be tallied on Wednesday following Election Day, at least 13 races were called in favor of new pro-life women Representatives in Congress. This major pro-life shift in the United States House of Representatives more than doubles the current amount of pro-life female Members in the House.

Susan B. Anthony List, a national pro-life organization, announced the victory Wednesday afternoon on Twitter. Marjorie Dannenfelser, the President at SBA List, called the “surge of victorious pro-life women candidates in the U.S. House… a stunning blow to Nancy Pelosi and her pro-abortion agenda.”

In addition to the 13 new pro-life female Members, all of the 11 current pro-life females in the House won reelection Tuesday night, and Rep. Cynthia Lummis of Wyoming will join the Senate next Congress as an additional pro-life female. Sen. Joni Ernst of Iowa pulled off a tight victory to secure her seat, along with Sen. Cindy Hyde-Smith of Mississippi. Sen. Kelly Loeffler of Georgia advanced to a runoff election that will take place January 5, 2021.

With these 13 additional pro-life women — seven of whom flipped Democrat-held seats in the House — there is hope to make waves with pro-life initiatives like the Born Alive Petition. The discharge petition was launched by Republican Whip Steve Scalise in the 116th Congress to attempt to override Speaker Nancy Pelosi’s refusal to bring Rep. Ann Wagner’s Born-Alive Abortion Survivors Protection Act to the House floor for vote. If the petition garners at least 218 Member signatures, a vote will be forced on the bill, and if passed, would protect infants born alive during botched abortions. With this election cycle’s increase in pro-life women in the House, hopes of reaching the necessary 218 signatures have increased.

As of noon on Wednesday, eight races with other pro-life female candidates for the House of Representatives had yet to be called.