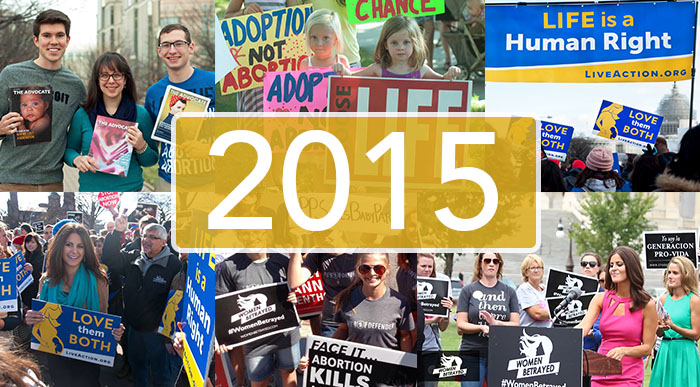 The pro-life movement saw significant advancements in 2015, with historic efforts to defund Planned Parenthood, a flurry of pro-life legislation, and national attention to the abusive practices of the abortion industry.

This year, continuing in line with the national trend towards life, saw incredible wins for the movement at both the federal and state level. For the first time in U.S. history, both houses of Congress passed legislation to strip abortion giant Planned Parenthood of its taxpayer funding, and the nationwide abortion rate continued to dip. Below are a handful of victories in 2015.

Hearts were changed about abortion, and babies were saved Ending abortion in the United States begins with the individual. Each person who changes his or her mind about abortion — who encounters the humanity of the preborn child and the violence of the abortion procedure— is key to shaping national sentiment.

Every day, through comments on Live Action’s social media platforms and personal e-mails, team members hear of individuals who changed their mind about abortion after watching a Live Action investigative video, reading a life-affirming story, or encountering the humanity of preborn children through educational campaigns. Live Action is on the front lines, educating millions each week through new media platforms about the preciousness of life. In historic votes, the U.S. House and Senate passed bills to end the taxpayer funding of abortion giant Planned Parenthood.

Congress voted to halt over $500 million of annual federal funding to the abortion business for one year, directing monies to comprehensive health clinics that outnumber Planned Parenthood 20 to 1.

The votes in both chambers of Congress were historic, as this is the first time that both the U.S. House and the Senate have passed legislation to end the group’s taxpayer funding. The abortion rate, which dipped in both red and blue states, reflects that more mothers are choosing life instead of abortion. Between the reported periods of 2010 to 2013, live births declined in the U.S. by 1.4 percent, while the number of abortions declined by 12 percent.

As statistics on abortion reveal, the decades-long drop in abortion numbers is a steady, national trend. In the summer of 2015, Americans were exposed to Planned Parenthood’s black market baby parts business. A dozen videos were released, detailing how the abortion giant illegally profits from the sale of baby organs, how abortionists manipulate the abortion procedure, and admit to performing what appears to be partial-birth abortions.

The videos catapulted Planned Parenthood into the national spotlight, placing its federal funding and egregious practices under intense scrutiny. Over a dozen states took action to defund the abortion giant in the wake of undercover exposés by the Center for Medical Progress. By attempting to cut off Medicaid contracts with Planned Parenthood affiliates and redirecting funds to comprehensive health care providers, state leaders responded to evidence of widespread abuse by the abortion giant.

A handful of states also launched investigations into Planned Parenthood’s abortion practices, after video evidence showed the group’s extreme disrespect for human life and willingness to break the law.

Nearly 50 pro-life laws were passed in the U.S. In 2015 alone, states across the country spearheaded pro-life legislation protecting women and preborn babies. Out of 400 proposed bills, 47 became law.

Measures passed included bans on abortions after 20 weeks of pregnancy, tougher medical standards for abortion facilities, informed consent requirements, and more. Increased pro-life legislation is one factor that has contribued to the national drop in abortions.

Planned Parenthood was forced to confront its mammogram lie

In 2015, Planned Parenthood President Cecile Richards was forced to admit to Congress and the American public that the abortion giant does not provide mammograms, contrary to previous claims. Richards made the statement during a hearing on Planned Parenthood’s role in fetal parts trafficking.

To date, Live Action’s video has garnered over 10.6 million views on Facebook and Youtube, and over 120,000 shares. In March of 2015, Live Action President Lila Rose brought the pro-life message to the United Nations, sharing with officials the dignity and preciousness of every human life.

Rose, who traveled to New York to make the presentation, discussed Live Action’s groundbreaking exposés with diplomats, urging for the protection of preborn children and a restoration of respect for every person.

Members of the European Parliament heard about Planned Parenthood’s abuses Planned Parenthood, which is heavily funded by the European Union, is a global organization, and is advocating for the expansion of abortion worldwide. Every day, Live Action advocates for the preborn across multiple new media channels— on social media and news media— sharing the value and dignity of every human life. Live Action has the largest social media platforms in the pro-life movement, reaching millions each week.

When the undercover baby parts trafficking videos emerged in 2015, Live Action was among the first to propel the message nationwide. The exposés went viral on social media, and lawmakers, presidential candidates, and even Planned Parenthood, were forced to address the issue.

The daily online advocacy for life is shaping national sentiment on abortion, changing hearts and minds and awakening the conscience of America to the dignity of each human life.