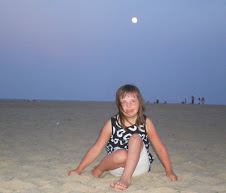 Chloe at the Outer Banks (from ChloesMessage.blogspot.com)

Kurt Kondrich isn’t shy about standing up for the rights of his daughter, Chloe, or anyone else, who, like Chloe, has Down syndrome. Together with Chloe, he has become an advocate for those with the condition, even heading back to school to earn his Master’s degree in Early Intervention. But Kondrich says his mission is still the same today as it was when he was a police officer – to protect and serve. That is what he does for the Down syndrome community.

When Chloe was born, Kondrich knew that something wasn’t quite right based on the tone in the doctor’s voice. The doctor said that Chloe showed signs of having Down syndrome and was a bit surprised when Kondrich asked to hold his daughter. But the moment he held her, he knew he wouldn’t let anything stand in his little girl’s way. After bringing her home, he was inspired by her even more. In an article for Belief Net, he writes:

I was amazed by the ABILITIES of this little girl who not long ago would have been labeled uneducable and shipped off to an institution for a life of EXCLUSION.

Today, in addition to his column at Renew America and his blog Chloe’s Message, Kondrich has now helped to create a new law in Pennsylvania: Chloe’s Law also known as the Down Syndrome Prenatal Education Act.

Chloe’s Law is a huge leap forward in the fight to end the abortions of children with Down syndrome. At this moment in time, 90% of unborn babies diagnosed with Down syndrome are aborted. Many of those lives could have been saved if parents had just been given accurate and up-to-date information about Down syndrome and what life is like living with the condition.

Chloe’s Law will help to finally make that happen by requiring health care experts to provide women who receive the prenatal diagnosis of Down syndrome with supportive, factual, and up-to-date information from the Pennsylvania Department of Health. This includes physical, developmental, education, and psychosocial information and resources, as well as support services including the state-funded early intervention program.

Chloe, who is now 11-years-old, began reading at age 3 and is now reading at the same level as her peers. Her success in life is due to the fact that Kondrich, his wife Margie, and their son Nolan, stopped at nothing to ensure Chloe received the support she needed to reach her full potential. All parents deserve the opportunity to do that for their children. And now Chloe and her dad are making that possible.  Mrs. Kondrich told the Pittsburgh Post-Gazette:

I don’t want any expectant mother to feel that pain or confusion when they get a prenatal diagnosis. I want this law to give women hope. Chloe was a blessing.

All children are, no matter their diagnosis.