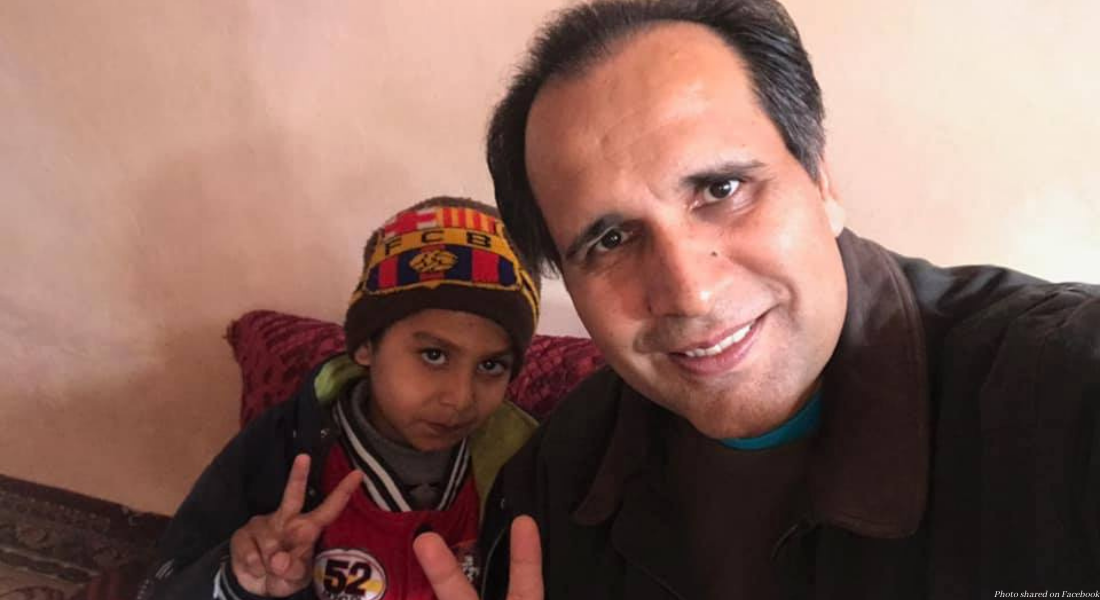 A Florida couple had been trying to bring their son home from Afghanistan for years. Last month, he finally made it home, just in time.

Nova Southeaster University professor Bahaudin Mujtaba was born in Afghanistan but now lives in Fort Lauderdale. He and his wife had been trying to finalize the adoption of a distant relative, Noman Mujtaba, for five years, when the Taliban took over Afghanistan and American troops evacuated. Getting 10-year-old Noman to the United States took on new urgency for the Mujtaba family.

“He’s very nervous about the situation in Afghanistan, as obviously every Afghan would be. So there’s a lot of uncertainty, a lot of fear,” Mujtaba told NBC News in mid-August, saying that he could hear bullets firing while he spoke to Noman on the phone. “And he’s at that age where he doesn’t want to miss school. Everything is shut down right now. And that’s what the fear he was expressing to me over the phone.”

Mujtaba met Noman five years ago on a trip to his hometown in Afghanistan. Noman’s mother had died from cancer and his father is elderly and unable to care for him. Noman has hopes of being a doctor or an engineer, but Mujtaba is most focused on getting him appropriate medical care; he believes Noman may have diabetes or other medical issues which have gone untreated.

Though Mujtaba and his wife were almost finished with the adoption process, they were worried the Taliban regime would force them to start from the beginning again. As Mary Beth King, executive director of the Frank Adoption Center, explained to NBC News, the government of Afghanistan has strict requirements. “It’s a combination of the fact that Afghanistan prefers adopting parents who are originally from Afghanistan who are practicing Muslims, and who meet the other kind of legal and personal qualities that the Afghan government has established for their children,” she said.

Things only got more difficult once the government officially fell; it took two attempts for Noman to get past Taliban checkpoints. “They had to basically abandon that attempt of getting inside the airport, and after 14 hours, they went home,” Mujtaba said to NBC6. “Stayed overnight, and the next day they tried again.”

On the second attempt, Noman was successful, but it was still a traumatic experience. “My son mentioned the Taliban were firing bullets into the air to disperse the crowd and he was just meters away from that, so there was a lot of pushing, shoving, people getting away,” Mujtaba said. “[A]nd unfortunately during the stampede, many people did get injured and did die.”

Once Noman got past the Taliban checkpoints, Mujtaba and his wife were left waiting, often with no information because there wouldn’t be internet or phone access. “Oftentimes, I would be looking at the television, and the reporting of newspapers and journalists providing some visuals, hoping to see a glimpse of him being okay. So, these worries do go through your mind, and it, unfortunately, is challenging to deal with,” Mujtaba told Bay News 9.

Thankfully, Noman was able to make the slow trek across the globe to finally make it on American soil — and to be with his new parents, for good.

“He says the trip obviously was good because he made it home, however, he did fly out in a military plane, which means everybody was packed like sardines close together,” Mujtaba said. “When he came to Florida, he said, this is America. So I think maybe the fact he was so close to his home finally he feels he was home. He was pleased, happy and a pleasant experience to hear noise in that room and it’s not quiet the way it always has been over the last three years. So the fact he’s there, making noise and in his room, that’s a feeling I don’t know how to describe.”

Noman has now been able to swim in a swimming pool for the first time and has discovered that he loves Chinese food. Still, Mujtaba said he still fears for his family that was left behind, hoping they aren’t suffering under the Taliban rule.

For Mujtaba, he has no doubts about who to thank for his miraculous reunion with his son. “I just want to thank all the service members that are actually risking their own lives to save all of the Americans and SIV applicants and all the other Afghans who were able to get out of Afghanistan,” he said. “I want to thank all of them and their family members for making the sacrifices.”