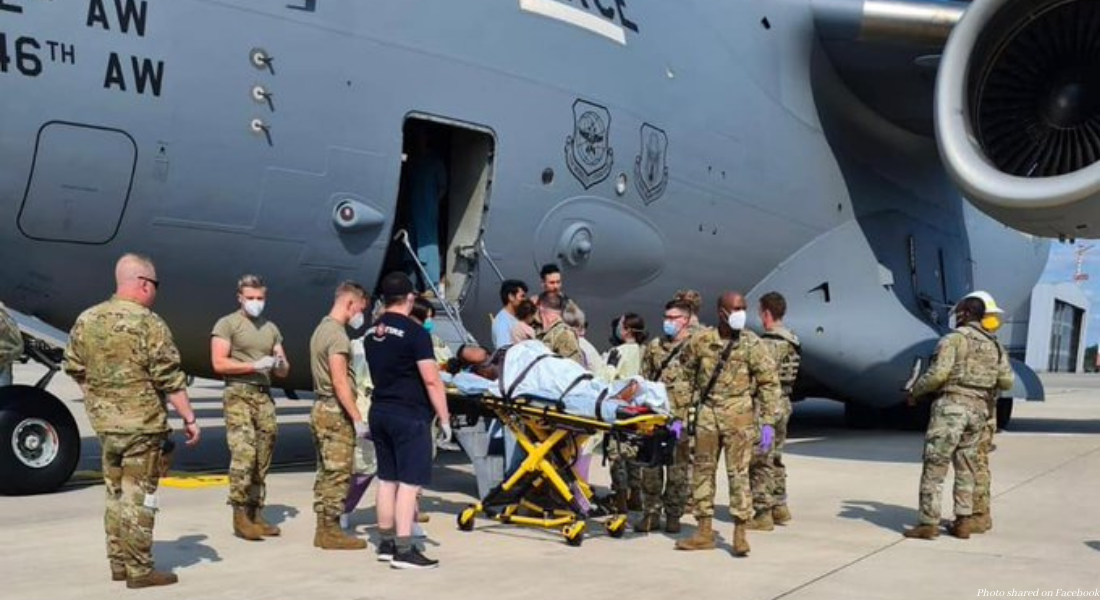 UPDATE, 8/30/2021: The baby delivered on an Air Force plane has been given an inspiring name, chosen for the call sign of the C-17 her mother escaped Afghanistan on. The Department of Defense announced the baby nas been named “Reach” and is currently recovering well in Germany. Reach 828 evacuated refugees from Qatar to Ramstein Air Base in Landstuhl, and carried the now-internationally known family.

General Tod Wolters, commander of U.S. European Command, said officials have remained in contact with the family, and are hoping for a bright future for Baby Reach.

“So that child’s name will forever be Reach,” he said. “And if you can well imagine, being an Air Force fighter pilot, it’s my dream to watch that young child called Reach grow up and be a U.S. citizen and fly United States Air Force fighters in our Air Force.”

8/24/2021:Thousands of civilians in Afghanistan have been fleeing the country since the Taliban takeover. Much of the world has watched in horror as terrified Afghan citizens resort to desperate measures, begging for troops to help them escape. But amidst all of the fear, one story shines like a beacon of hope. One pregnant woman was able to evacuate, and her baby was delivered on board the flight bringing her to safety.

The woman, who has not been named, was on board a C-17, which quickly headed for Ramstein Air Force Base in Germany after she went into labor. According to Air Mobility Command, which released a statement to the Washington Post, the woman delivered the baby shortly after the plane landed.

“The mother went into labor and began having complications,” Air Mobility Command said. “The aircraft commander decided to descend in altitude to increase air pressure in the aircraft, which helped stabilize and save the mother’s life.”

After the plane landed, medics from Ramstein came aboard and helped deliver the baby, which was a girl. Both mother and baby are said to be in good condition.

Medical support personnel from the 86th Medical Group help an Afghan mother and family off a U.S. Air Force C-17, call sign Reach 828, moments after she delivered a child aboard the aircraft upon landing at Ramstein Air Base, Germany, Aug. 21. (cont..) pic.twitter.com/wqR9dFlW1o

U.S. Army Captain Erin Brymer is a nurse who was part of the team that helped to deliver the baby. In an interview with CNN, she said they boarded the plane “expecting the worst, hoping for the best.” Though Brymer said she’s helped deliver countless babies in the hospital, she had never participated in a delivery like this one before.

The medical team only had 10 minutes notice about the impending delivery, Brymer said, and when they got on board, other female evacuees had surrounded her, holding up their shawls to give the mother privacy. “It was a beautiful sight to see,” Brymer said.

Once they verified that the woman was crowning, the medic team knew they had to remain where they were. “That baby was going to be delivered before we could possibly transfer her to another facility,” Brymer said, adding that the team tried to make eye contact with the mother to communicate “that everything is okay and that she can deliver this baby safely.”

Thankfully, there was good news almost right away. Brymer said she knew things would be fine “when the baby came out screaming and we were able to put her on Mom’s chest and get her breastfeeding right away. I was like, ‘okay, we’re good here.'”

The team is now planning on the potential for other deliveries as more evacuees arrive. “I actually feel quite honored and humbled to be a part of this mission. And just kind of… the sheer humanity of this,” Brymer said. “I mean, we’re people, they’re people. We both want the same things, strong mamas and babies.”