Based on the talk after Election Day, it could be easy to think we might as well forget about pro-life campaigns. Two out of three pro-life ballot initiatives failed on Tuesday. The campaigners – in Colorado specifically – are often criticized for coming at it again and again.

No, not every ballot initiative or potential law passes, but many do. From 2011-2013, 205 abortion restrictions were enacted around the nation. According to the Guttmacher Institute (basically a research arm of Planned Parenthood), “by 2013…22 states had five or more [abortion] restrictions, and Louisiana had 10.” 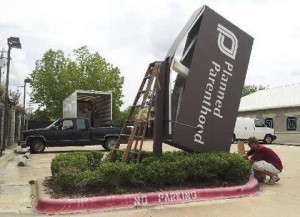 The abortion clinic in Bryan, Texas closes down.

After Texas passed a number of abortion restrictions, the state saw a 13% decrease in abortions in just one year. It is also estimated that 150,000 less abortions occurred in the nation in 2012 as compared to 2008 – 1.04 million instead of 1.21 million.

Second, beyond the hard numbers of lives saved after pro-life laws are passed, we also have the countless people behind the percentages of losing campaigns. A campaign is often relegated to mere numbers on paper, but saved lives are behind those discouraging numbers.

The mere presence of a pro-life campaign in a state saves lives and changes hearts and minds. No, a law may not be passed, but that doesn’t change the fact that the citizenry is still having a vital conversation about abortion.

I’ve seen firsthand that these essential conversations change and save lives. Of course, we want every pro-life campaign to tangibly succeed. But we also need to start measuring success beyond the numbers on paper to the much-harder-to-measure changes at the heart level.

Civil rights are often won person by person. Man’s inhumanity to man is often stopped when people realize the truth for themselves on a personal level. And pro-life campaigns – whether they are personhood, fetal pain, ultrasound, or women’s right to know – take the cold, hard facts of abortion and put them into a digestible format for the general public.

Educational pro-life campaigns, too, are vital to changing people’s views at a heart level. Virtue Media has done an excellent job, often lowering the abortion rate by 10-20% in cities where their ads consistently air.

Pro-life campaigns refuse to let the public ignore abortion. When these campaigns are waged, they transform “abortion” from a mere medical term into a living, breathing – and horribly ugly – reality.

Just as Emmett Till’s mother forced the public to realize exactly what had happened to her son, so the pro-life movement must demonstrate to the American public the tragic facts behind abortion. And one of the best ways to do this is to run pro-life campaigns.

Baby at 14 weeks. Will we continue to speak up?

Failure is not an option. Every time we run a campaign, we succeed. Our success goes far beyond the numbers and into the very hearts of the American people.

We are a kind, compassionate, nation, founded on the Scriptural principle of justice. And because of this, I have no doubt that, one day, justice and truth will prevail in the abortion debate, and legal abortion will be no more.

Just as the Southerners and the German citizens stood aghast when they realized the terrible human tragedies they had allowed in their own backyards, so Americans, too, will be horrified when the full weight of abortion comes to settle in our souls.