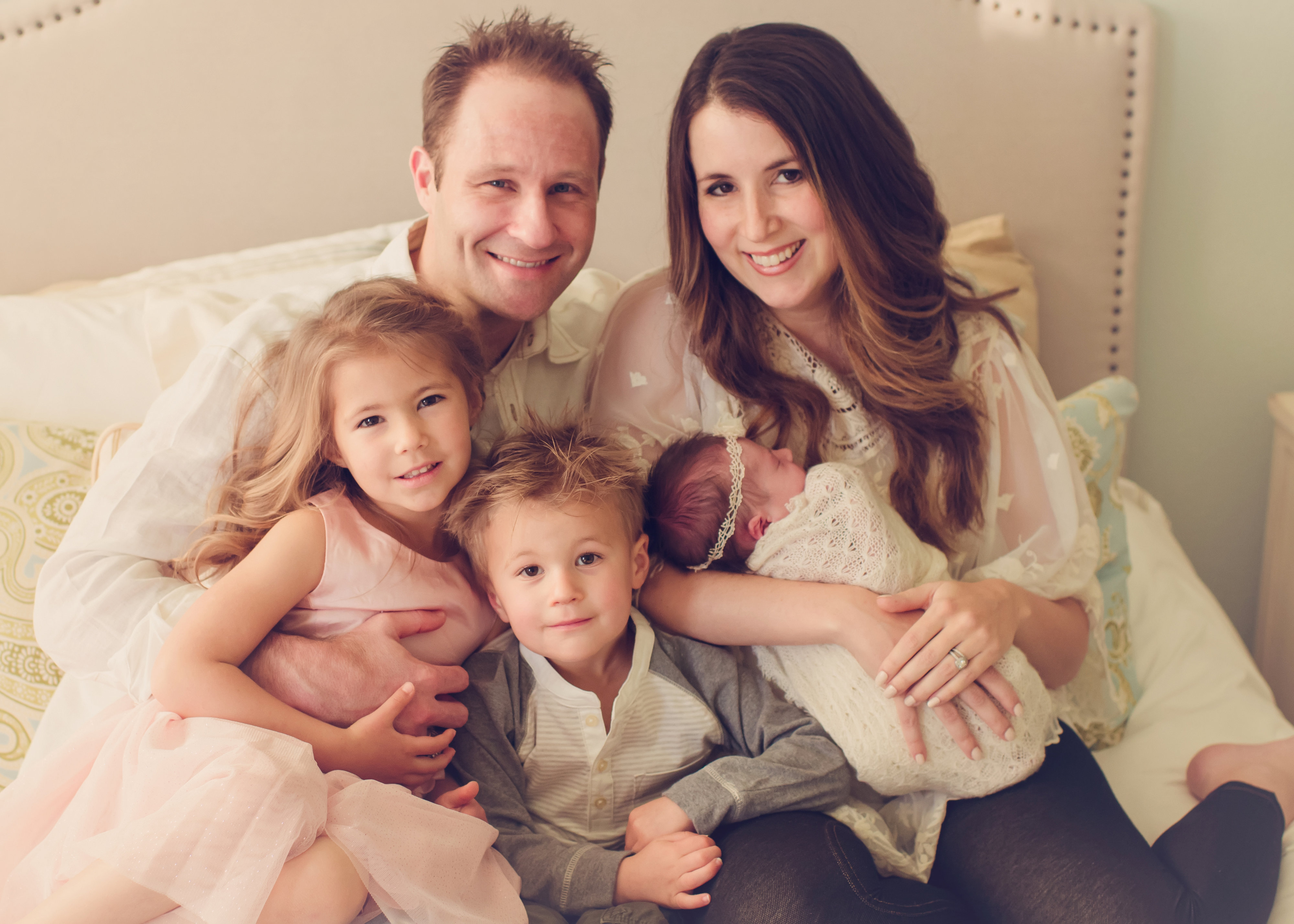 Melissa Hinnant and her husband Rick, founders of Grace & Lace, had already suffered a miscarriage when tragedy struck during the couple’s second pregnancy.

During a routine doctor’s visit at roughly five months gestation, Melissa learned that she had dilated seven centimeters and that she would likely deliver her daughter, who would not survive. The heartbreak and leaps of faith this couple would endure would usher them into a completely unpredictable and beautiful future.

“My only hope [for the baby to survive] was being rushed into emergency surgery,” explained Hinnant. “They said, ‘We’re going to try to save her, but you’ll be very high risk for the rest of your pregnancy.’”

The surgery was followed up with bed rest in the hospital for two weeks, but then the labor began again and it couldn’t be stopped. Their baby girl, Halle Jane, was born too young to live outside the womb, and as Hinnant says, “The Lord took her straight to heaven.” The couple with baby Halle.

The doctors did not have positive news to give the couple after the loss of their daughter. In fact, they advised the couple to never try for another baby again. “The doctors, they basically gave us the doom and gloom that I would never sustain a pregnancy to full term,” said Hinnant. “That really, really crushed us. My whole life my desire was to be a wife and mother and have a family; and to hear the news— that was really, really painful.”

One doctor, however, offered hope by way of an explorative procedure to be done in advance of a pregnancy that could allow Hinnant to carry a child to term. Baby Halle’s feet with her parents’ rings and hands.

“We had faith that we would be able to have a child that survives,” said Hinnant. “And we knew the risks involved: in the hospital for the rest of pregnancy, preterm labor, the baby could die, be in the NICU, and other complications—but we were willing. We really felt that we were willing to accept the risks.”

The couple went forward with the surgery and soon Hinnant was pregnant. She had to visit the hospital weekly for injections to help prevent labor and eventually had to be placed on bed rest for 18 weeks. The goal was to get the baby to 25 weeks and give her a fighting chance; but baby Sienna surpassed all expectations when she was born on her due date at 40 weeks. Hinnant says that her baby is definitely worth the struggles. Melissa gets her hair washed while on bedrest.

The Hinnants then tried for another child and this time, Hinnant was on bed rest for 4 months. Their son, Jett, was also born full term and healthy.

“She said, ‘This has got to be your last pregnancy.’ She expected longer bed rest,” said Hinnant. “I was monitored just as closely, had weekly doctor visits and weekly ultrasounds, but not one day of bed rest.”

Baby Livia was born at full term miraculously without any of the warning signs of early labor.

It was during her months-long stints of bed rest, starting with her pregnancy with Halle, that Hinnant began to sew. She ended up sewing herself a beautiful story. “With Halle, while I was in the hospital, my bed rest was so confined that I was allowed to use the bathroom but couldn’t shower or get my own food. The bathroom and that was it,” she explained. “I was totally confined and I was like, ‘I just can’t sit here. I’m gonna go crazy.’ I remembered I had learned to knit and crochet years ago. I did that to pass the time.

“I made baby blankets for all the other women in high risk in the hospital. That’s really where my love for knitting was born and really grew. And after we lost Halle, I continued sewing. I had a lot of healing through that. We never doubted that Halle was gonna make it. It was so painful, so heart-wrenching. I found that having a vision, having a purpose to move through her loss really helped me heal. That’s where Grace & Lace was born. That’s where my desire to create and sew was born.”

Being from Minnesota, Hinnant decided she wanted a pair of socks that would stick out the top of her boots. She was determined to create the perfect pair; and when she did, she wore them everywhere. Strangers would stop her to ask where she bought them.

“I was collecting a list of total strangers with emails and phone numbers of people who wanted me to make them a pair,” she explained.

With the support of her husband, Hinnant put her creations up online and within days, she had 400 requests for socks. Soon, the hobby of sewing through her suffering became a full-blown, successful business that would go on to be featured on the popular show “Shark Tank.”

“We realized we had a business on our hands,” she said. “I just thought it was gonna be a small, online shop. But we realized pretty quickly six months or a year later that we were a thriving, successful business.”

Today, Grace & Lace is so successful that the couple was able to team up with the charity Angel House to help care for orphans in India, something that has been close to Hinnant’s heart since she visited the country at the age of 18 on a mission trip. An orphan in India enjoying the new running water.

“I have never seen poor like that,” she said. “Babies with stomachs so extended, so malnourished. There were so many that they had to strap bottles to their faces to feed them. I am so broken for this place. I wrote in my journal that I’ve got to do something more. I thought maybe I’ll go to college and come back. I never in a million years thought I would have a business that would fund the building of orphanages.”

Hinnant says she is thankful for the opportunity to make an impact in the world, and that she feels honored that God would trust them with a business where they could invest in other people’s lives. The children in the orphanages they build get loving parents, fresh water, beds to sleep in, uniforms, and a private education. The couple’s three small children are witnessing their parents make that difference in the world, and the couple hopes to take them to India in the next five years.

“We’re trying to get them to understand the concept that these people don’t have running water, school, clothing,” explained Hinnant. “We’ve talked to them about who these children are. My oldest often prays for them at night.” Girls at an orphanage built by the Hinnants.

The children also know about their big sister, Halle, whose short life was the driving point for the great work their parents are doing.

“I’ll never forget my husband walking into the hospital room after we lost Halle and he said, ‘Melissa, we have a choice to make. We can be mad and bitter and question God and why He would allow this to happen, or we can choose to believe there’s a bigger plan to come of this.’”

Not only have the Hinnants turned their loss and sufferings into a way to help children across the world, they are also helping other parents deal with the pain of losing a child. At the unveiling of an orphanage in India.

“We may never know why, but at that moment I chose to believe that something good would come of this,” said Hinnant. “Don’t waste your pain. Let your pain transform you. That pain is so hard and that for me inspired me to create through her loss. That might not be it for everyone, but for everyone going through pain I feel like I want to encourage people to be transformed through it. What do you want to do in honor of that child that you lost? There’s such great healing that comes. Beauty through the ashes.”