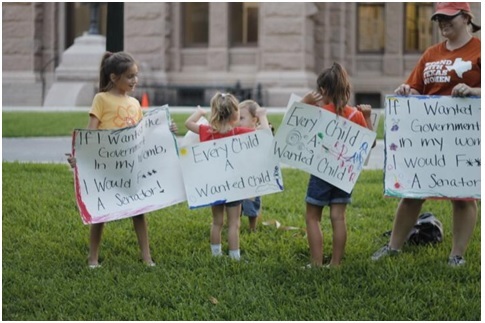 Par for the course? 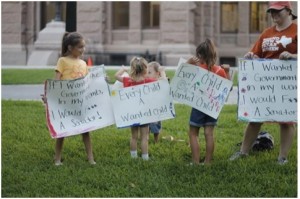 The madness in Texas continues. Pro-aborts haven’t exactly covered themselves in glory by championing the cause of hacking up and throwing away your 20-week-old unborn baby, but the hysterics of their advocacy seem to reach new lows by the day.

The central “heroic” act of this farce was an attempt not to make a better argument or persuade a majority of Texans, but to shout down the democratic process with volume and demonization. Jon Oliver, spokesman for pro-life state Senator Donna Campbell, says the senator has “received Facebook messages and e-mails saying, ‘I hope you’re raped’ and ‘I hope your daughter’s raped.’” One especially creepy picture shows a protestor’s pre-teen daughter holding a sign that says, “If I Wanted the Government In my Womb, I Would F*** A Senator!” Another image shows a child holding a sign depicting a wire coat hanger. And CNN Express producer Josh Rubin reports that a small handful of young pro-aborts at the state capitol tried to silence pro-life speakers and “Amazing Grace” singers with chants of – I kid you not – “hail Satan.”

Gee, who’d have guessed that the side that advocates disenfranchising the entire country on baby murder by upholding Roe v. Wade would have less than reverence for the right to vote on these issues? Who would have expected people who cherish the power to dismember their own kids would harbor such violent wishes toward the kids of people they hate? That fans of Planned Parenthood-style sex education would think nothing of having their own little girls brandish crass sex slogans? That the party that booed God at their own national convention might flirt with worshiping the other guy?

Real head-scratchers. And don’t think we’ve seen the end of it.

No, they don’t represent the entirety of Americans who identify as pro-choice, or even the entirety of the Texas protestors. But if the roles were reversed, this would be more than enough evidence for pro-aborts to fire up the narrative about the pro-life movement being dominated by violent, woman-hating religious fanatics. Yet don’t expect many pro-aborts to take this as a wake-up call to either get their house in order or temper their smear campaigns with a bit of fairness.

That said, the reason these things flare up within the pro-choice ranks is because abortionism – especially the brand of it that doesn’t budge even for fetal consciousness or brain sensitivity – is fundamentally sick. United by the most heartless flavor of greed and enabled by a culture that helps them pretend it’s noble, abortion culture unleashes the worst aspects of human nature. As David French explains:

Ask the vast majority of rational people if they’d kill another person to change their own circumstances for the better, and they’d quickly answer no. Put them in the actual situation, and we know that millions answer yes. We know because of abortion […]

For quite some time we’ve conducted the abortion debate as if people weren’t fallen, as if mankind’s nature weren’t inherently sinful. So we convince ourselves that if only mothers and their pressuring families or boyfriends knew that the child was a child and not just a “clump of cells,” then they’d make different choices […] Yet abortions still happen, on a massive scale […]

The precursor for abortion is the idol of the self. Mandatory sonograms and other measures can impact the softer hearts among us — and are thus valuable for that reason alone — but abortion won’t end until the idol is destroyed.

Hate and ideology of this magnitude are not mistakes. They’re not ignorance. It’s evil.

You want a humane, compassionate, civilized society? Then banish this barbaric sickness to society’s fringes. Make abortion the litmus test for welcomed membership in an enlightened political community.

PS: It turns out even Satanists have standards: the United Kingdom Church of Satan tweeted, “Unfortunate to see Satan’s name used in such a diabolical manner. Another example of what ‘Satanism’ doesn’t represent.” When even literal devil-worshipers think your cause is too evil…