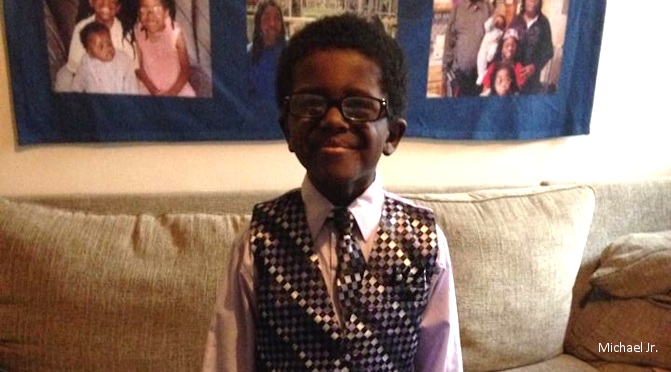 When Nalida Besson was pregnant with her third child, she was told to abort. It seemed some people, including her midwife, didn’t think Nalida could handle a third child, especially one who had a 50/50 chance of inheriting congenital cataracts, a condition that makes the eyes small and leads to blindness. It’s a condition her husband Michael and both of their daughters were born with. However, Nalida and her husband Michael knew that their son was worthy of life.

Her girls, Mikaella and Leonida, were ages 9 and 5 at the time of Michael Jr.’s birth. Mikaella, who also has autism, was doing well in an inclusive education school. She had some behavioral issues but was very verbal and very social. Leonida, who is also on the autism spectrum and has a seizure disorder, was in an autistic kindergarten class and struggling with some behavioral challenges.

“Her behavior was erratic,” explains Nalida. “Even as I was pregnant with my son, I’d be in church or the store and she’d have a meltdown. She would kick, and I couldn’t carry her. She’s better now, but back then, it was a tough time.”

Her pregnancy with Michael Jr. was a surprise, but a welcome one. Nalida called the office of the doctors she had used for her first two pregnancies and made an appointment to confirm that she was indeed pregnant. She had no plans of seeing anyone except the nurse, but that’s not how the appointment went. 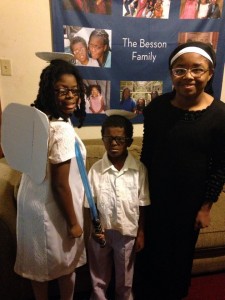 “The nurse said to me, ‘Well, it’s not planned, but a blessing, right?’ She was upbeat and positive,” says Nalida. “And then she said, ‘Well the midwife wants to see you.’ I didn’t have an appointment, but she was my midwife, so I figured she wanted to check in. So I went into her office. She said to me, ‘I heard the test is positive and you’re pregnant. Things are difficult. You already have two kids with disabilities. Your plate is too full. You have a choice. You don’t have to keep the baby.’ I was stunned. I didn’t say much. I didn’t believe in abortion, and I was just converting to Catholicism. I was taken aback, and I didn’t even answer her. I just stood there. She said it was too hard for me and we could make an appointment.”

Nalida didn’t give her midwife a response and simply left the office. She continued with the practice, and the midwife later asked her repeatedly what she was going to do with a boy, since she had two girls. It seemed to Nalida that her midwife was looking for reasons for the pregnancy to be terminated. To Nalida, it seemed as though many people were asking her if she would keep this baby.

“Maybe the culture shifted more, or maybe it was because I had kids with disabilities that I felt that way,” she says, “but people just kept saying, ‘Are you gonna keep the baby?’ No one has asked me to that extent before.”

After Michael Jr. was born, the midwife asked Nalida about her birth control choice. When Nalida responded that she would be using NFP, her midwife told her that because of NFP, she would be seeing her again in two years. Nalida switched practices and never went back.

All three of Nalida’s children have had surgery as infants to remove the cataracts, which involves removing the natural lenses. They each wear thick glasses to replace that natural lens, which improves their vision but doesn’t correct it. They are now 17, 13, and 7 years old.

“Life is busy, but blessed,” says Nalida. “Of course I have challenges with educational plans and getting them the right services, but behavior-wise, it’s much better. My younger daughter has mellowed out and is just a loving child. It was a tough time when I had Michael because of her meltdowns, but then, just as he grew, she outgrew the behaviors. My older daughter is thinking about the future and careers with her challenges, and my son is making his first Holy Communion this year.”

Nalida wants other parents who are pregnant with or have children who have special needs to know that even though some people may say it will be too much or too stressful or that they can’t do it, it’s okay. She says that it isn’t true that only a certain type of person can handle having a child with special needs. She knows firsthand that the love you give and the love you get back are incredible and totally worth it. Despite the challenges, she says that every child’s life is worth it. About her son, she says:

He’s just a joy. I mean, I look at this kid and I always think to myself, my God, if I had listened to that woman! He’s a mama’s boy. He just hangs out with me and talks to me. He’s got a great sense of humor. He’s just a bright kid. Two years ago I said something about people believing it was okay to take people out of their mommy’s tummy and that someone wanted me to do that to him, and he asked if she was in jail, and then he said that she should be. My goodness, this kid! It’s the kids who get that [abortion] is wrong. I feel blessed to have my kids. There is dignity in every human being.

For more information about finding a pro-life OB/GYN, visit the American Association of Pro-life Obstetricians and Gynecologists.