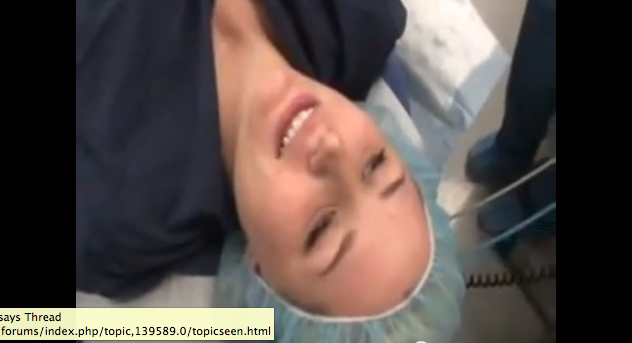 Her trophy was a dead baby, but her accolades live on.

Emily Letts, an abortion clinic worker, made news when she entered the Abortion Care Network’s video contest to de-stigmatize abortion—by filming her own abortion experience. Her video won the contest and garnered much publicity. The video is making its way around the interwebs again, stirring emotion and even praise from some. Sounding more like a woman who just proved that a hard workout is good for a person, rather than one who glorified killing a baby, Letts has authored an essay for Cosmopolitan magazine on why she filmed her abortion. The former professional actress says she stole the abortion limelight to show another side of it—and it’s a side she “loves.”

Still, every time I watch the video, I love it. I love how positive it is. I think that there are just no positive abortion stories on video for everyone to see. But mine is.

Describing the procedure, she says that having an abortion was a special memory, like giving birth:

I knew the cameras were in the room during the procedure, but I forgot about them almost immediately. I was focused on staying positive and feeling the love from everyone in the room. I am so lucky that I knew everyone involved, and I was so supported. I remember breathing and humming through it like I was giving birth. I know that sounds weird, but to me, this was as birth-like as it could be. It will always be a special memory for me. I still have my sonogram, and if my apartment were to catch fire, it would be the first thing I’d grab.

Letts also admits she didn’t use birth control, though part of her job is to teach about birth control. Though she says she feels “a little irresponsible and embarrassed about not using birth control,” she is actually more moved by the fact she can share her story and “inspire other women to stop the guilt.” Letts asserts that the guilt of abortion is bred in society, rather than in the fact women are killing a child. This attitude is one that pro-lifers are taking to task. Live Action President Lila Rose issued a statement May 6, condemning Letts’ glorification of death. Rose said:

Letts’s campaign to normalize the execution of a child lies to all of us. She  claims to film an abortion, but that is the one thing we don’t see.  We don’t see the powerful suction machine ripping the developing embryo from the safe harbor of Letts’s uterus.  We don’t see the child’s delicate arm and leg buds ripped apart by the force of the suction tube, or the child’s body parts floating afterward in a pool of blood and amniotic fluid in a medical receptacle.  All we see is Letts’s smile, not her victim.  In a society that religiously ignores the victim, we will never achieve lasting peace.

Letts’s triumphant smile after her child has been torn apart by a suction tube is a grotesque testament to a society that has come to embrace the slaughter of a child as “empowerment.”  Let’s rededicate ourselves to fight for a nation that would have protected Letts’s child, even when she won’t.  In honor of Letts’ child – whose own smile our world will tragically never know – let us redouble our efforts to make this nation safe for every child.

The tragedy of this super-sized publicity stunt, which has caused the former actress to get her 15 minutes of fame, is that it happened at the expense of a baby who wasn’t allowed to breath outside the womb for even one minute because the baby’s mom cared more about a statement than her own child’s right to life.