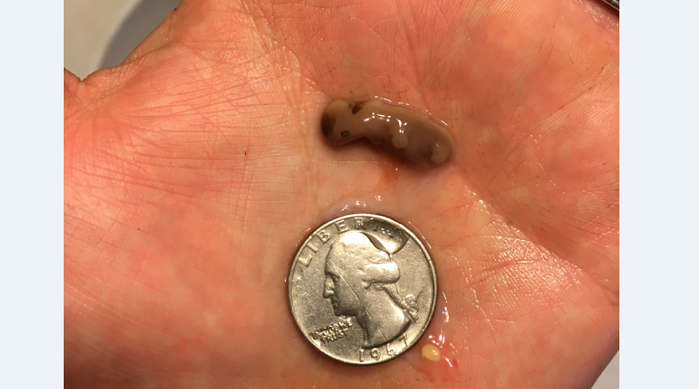 Nick and Sarah Szmiot were excited to learn that they were expecting their second child, but that joy quickly turned to sorrow when an ultrasound revealed that their baby’s heart had stopped beating around five weeks gestation.

Within a few days, Sarah delivered their son, whom they named Reuben, and the couple were able to take photographs of him. They shared these photographs with LifeNews in order to show the world the humanity of a preborn child in the very early stages of development.

“We removed him [from the amniotic sac] and were able to hold him in the palm of our hands,” Nick Szmiot told LifeNews. “Difficult but rejoicing time. Baby Reubie went to be with the Lord!” The couple planned a celebration of Reuben’s short life, including a birthday cake, candles, and a song. They invited their family to join them and commemorated the moment in photographs with their daughter Joy.

Though Reuben was only five weeks old and was smaller than a quarter, the pictures clearly show that he already had his head, his eyes, and his arms and legs growing and forming. He is a human being – vulnerable and deserving of protection. “Everyone needs to see that at 5-6wks, you can see head, hands, feet, eyes of this precious little creation,” Nick told LifeNews. “This isn’t tissue. It’s a life created in God’s image with a heart and a eternal living soul.”

According to the Guttmacher Institute, about a third of all aborted children are less than seven weeks gestation. These abortions are frequently performed using pills, the first of which blocks the natural progesterone that protects the lining of the uterus and cuts off nourishment to the baby, killing him. Then, 24-48 hours later, a second pill helps cause contractions:

The abortion industry will claim that babies Reuben’s age are nothing more than a group of cells or tissue, but the truth cannot be hidden when you see Reuben. These babies have their own unique DNA from the moment of conception, and all they need is time to grow, just like the rest of us in our early stages of life.