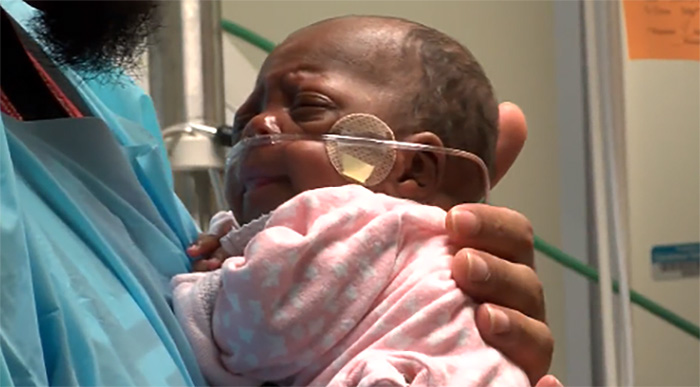 E’layah Faith Pegues was just 10 ounces and 10 inches when she was born three-and-a-half months early in the fall of 2015. Her entry into this world was not easy for her or her parents, but she has proven to be a fighter. As ABC News reports:

Megan Smith [E’layah’s mother] told ABC News today, that she and her fiance gave their child the middle name “Faith” because when they were told to prepare for the worse, they decided they “would always have faith” and that they were “never going to give up on her.”

Her neonatologist, Dr. Andrew Herman, told ABC News today that the young girl weighed less than a pound and fit “head-to-toe” in his palm when she was born.

“To be honest, we were unsure if E’Layah was going to make it,” Herman said, “but the doctor who delivered her could see she had a fighting chance, and her parents never lost faith it was possible she’d survive.”

About five months into the pregnancy, E’layah’s mother Megan Smith began suffering from high blood pressure. She explained to Fox 26 that doctors told her and her fiancé that their baby might not make it. “I wasn’t accepting that,” she said.

But then one day Smith realized E’layah wasn’t moving in her womb, and doctors told her they would need to do an emergency C-section or she and the baby could both die. Smith went into the surgery worried for her daughter’s life and wondering if her fiancé, who had left the room right before doctors announced the need for a C-section, would make it back to be there when she woke up. She was scared and feeling alone, so she prayed.

“Inside I was screaming, ‘The devil is a liar’, you know, ‘You will not have my child,’” she said. Despite the fact that E’layah is one of the smallest babies ever to survive birth – and even despite her need to be revived at one point – she is now doing well. At three months old, she weighs three pounds, 10 ounces, and doctors expect her to “live, thrive, play and be happy as a healthy normal kid.” She will likely go home in a few weeks.

“I was just so filled with joy that she was okay,” said Smith. Smith also shares that she and her fiancé are treasuring their “precious moments” with their small fighter – including how she smiles when her daddy sings to her or when she hears his voice on the phone.