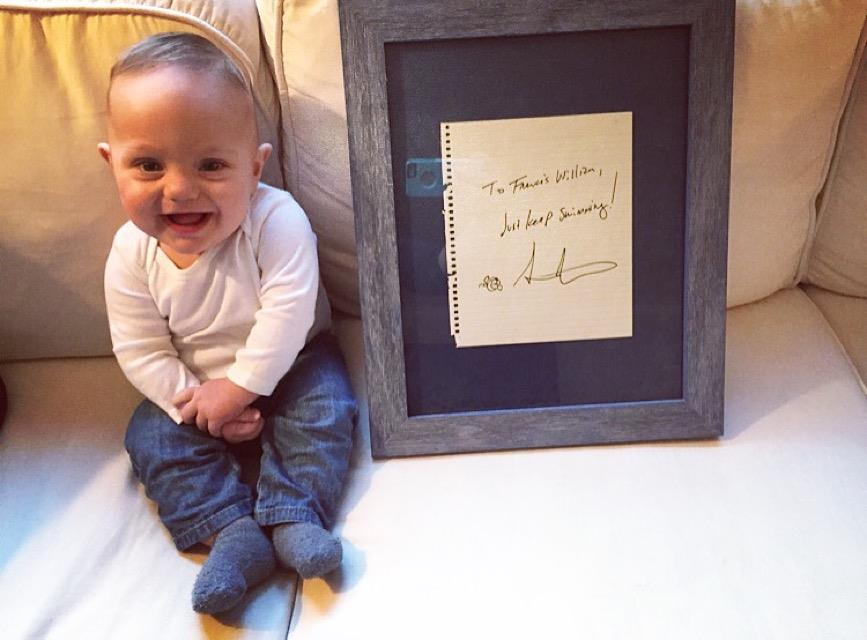 When Francis Azize was born 17 weeks premature, there was only a 15 percent chance he would survive. He weighed just one pound, nine ounces, and infections and perforated bowels added to his parents’ worries for their son. But when his parents, Jeffrey and Maureen Azize, watched a Ted Talk with Andrew Stanton, creator of “Finding Nemo,” they found one thing they needed: hope.

Jeffrey and Maureen learned they were expecting Francis after having been through a miscarriage. But, as they told The Today Show, their joy turned to fear when they learned that Maureen has a bicornuate uterus. Her uterus is in the shape of a heart, making it difficult, if not impossible, for her to carry a baby to term. Maureen was placed on medication and bed rest in order to keep her from going into labor before the age of viability. She made it to 23 weeks.

“He was the sickest baby on the floor, in the unit, out of like 83 babies,” Jeffrey said in a documentary made about the experience. Doctors told the couple that the numbers were all against their son.

Francis was so small that his parents’ wedding bands could fit his arms up to his shoulders. At five days old, they learned he had perforated bowels and would need either surgery or a less-invasive stint. They chose the stint and prayed that it would work— and it did.

“We had the choice: do everything, or do nothing,” said Maureen. “We wanted to give him a chance.” A nurse suggested that the family decorate Francis’ whiteboard to make the space more cheerful. His aunt drew a scene from “Finding Nemo,” and everyone loved it. Though there were nights they feared Francis wouldn’t make it, the little boy always pulled through.

It wasn’t long after that Chuck Kinnane, Maureen’s brother, sent the couple the episode of Ted Talk to watch. They weren’t sure why Kinnane had shared the video until near the end, when Stanton revealed he had been born prematurely. He told the audience that he had been very sick and his parents were told he probably wouldn’t live. But he did, and he was determined to make good use of his second chance at life.

“It was really inspiring hearing his story and how much he’s amounted to and how much thankfulness he has towards his parents for giving him the chance at life ultimately,” said Maureen.

A month later, the couple received a call from Kinnane who shocked them when he said he had just been seated next to Stanton on a plane. Kinnane shared Francis’ story and pictures and Stanton wrote Francis a note which reads: “Just Keep Swimming” – the motto of Dory, the forgetful fish from “Finding Nemo” and “Finding Dory.”

His parents say Francis has been doing just that. He spent 118 days in the Neonatal Intensive Care Unit overcoming each obstacle and finally being released to go home. Now, a year later, the video Kinnane made about his first weeks of life has gone viral. It has been viewed more than 15 million times, inspiring people around the world to hold onto hope.

Francis is another beautiful example of how drastically the age of viability has improved and more premature children are not only surviving but thriving and living full lives. Unfortunately, it is still completely legal to abort any child through all nine months of pregnancy, even when they are able to live outside of the womb.