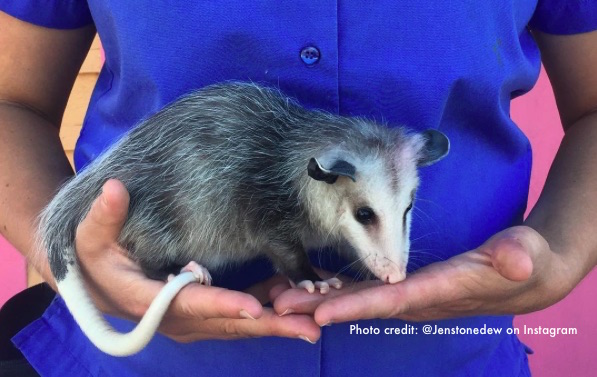 In a series of pictures posted to social media, zookeeper Jennifer Dew shared the growth of her preborn baby through size comparisons with a variety of zoo animals. While many expecting mothers take pictures comparing the size of their developing baby with pieces of fruit or other objects, Dew took things to the next level, with the help of Summer the baby opossum, Avery the umbrella cockatoo, Po the bushbaby, and other cute creatures.

This week Baby Dew is about the same size as Summer the baby opossum. #pouchbaby #summertime #opportunisticeaters

Dew has excellent access to a variety of unusual creatures since she works as an animal programs specialist at the Columbus Zoo. Weekly during her pregnancy, Dew is taking photos with animals weighing roughly the same as her preborn baby. She told The Huffington Post she got the idea from an app which compares the size of preborn babies to “weird but cute animals,” as well as from “an expectant mother who posted similar photos with animals throughout her pregnancy” to a Facebook group for zoo workers.

Dew credits her love for animals to her grandmother, who is no longer here with her. Dew’s daughter is due in December — exactly a year after her grandmother’s passing.

“Nana was a huge support to me throughout my life and followed my career very closely,” she said. “She knew my favorite animals’ birthdays and would always come to my zoo programs. I think some of my love for animals came from her.”

Dew has chosen the name Gwendolyn “Winnie” Dew for her daughter, after her grandmother — who she says was especially fond of the bushbaby.

Due to give birth in December, Dew sees her pictures as a way to build connections:

“Our department’s motto is ‘Touch the heart to teach the mind.’ It is more difficult to encourage people to care about something if they don’t have a connection with it. This has been another cool way to form a connection between people and wildlife.”

Editor’s Note: You can follow the development of a preborn child and read facts, watch videos, and see amazing ultrasound and 3D images online here from The Endowment for Human Development.