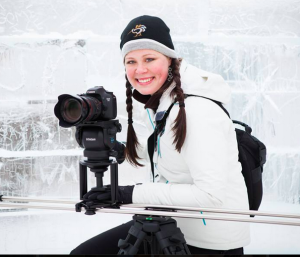 Not even a year out of high school, and Hannah Victoria isn’t the least bit afraid to dream big. The young, surprisingly experienced filmmaker plans big, too.

In January of 2014, Hannah Victoria founded Expressionistic Studios with a bold vision:

[T]o take the subject matter that most people deem too ‘messy’ to talk about such as human trafficking, abortion, eating disorders, etc, and turn them into beautiful, empowering films that prompt viewers to think thoughts that lead to life-changing action.

Inspiring, eh? And already, Hannah and Expressionistic Studios are busily tackling one of the toughest issues on that list: abortion. Hannah dreams of bringing a fresh perspective to the issue with her studio’s first planned film, “Mitosis.” She explains:

I’ve always been passionate about the sanctity of life and wanted to capture that passion in an artistic, non-offensive way that everyone can connect with on some level no matter their political or religious belief on life. There are countless pro-life films that condemn those with a pro-choice view, but I’ve never seen a film that clearly shows the extreme value and potential that a single life holds. Which is why I’m so passionate about bringing “Mitosis” to life.

“Mitosis” follows the story of Anthony Oswald who tragically loses his best friend to brain cancer at a very young age. Coming out of that traumatizing event, a young Anthony promises that in order to honor his friend’s memory, he will not stop until he has found a cure for the deadly disease.

The planned ending for “Mitosis” is so shocking – and compelling – that it must be kept under wraps until the short film is produced. But it promises to fulfill Hannah’s vision for reaching young people in today’s culture, and for creating a necessary conversation about the real cost of abortion to our society.

As young people, whether we choose to acknowledge it or not, society’s popular opinion on the sanctity of life is directly affecting our lives in huge ways. Just thinking about how profoundly different our world would be if the millions of lives lost were present is mind boggling! It’s time we, as the future leaders of this country, stand up for what we believe and make a positive difference. My hope and prayer for “Mitosis” is that it provides the necessary spark to make the desperately needed conversations a reality and empower our young leaders to rise and make a difference!

Hannah also dreams of “Mitosis” being “a powerful tool for pro-life organizations and individuals to have access to as a conversational tool that visually shows the potential for life.” Reminiscent of the powerful film Crescendo, Hannah Victoria’s “Mitosis” has the potential to raise funds for crisis pregnancy centers and turn the tide of thinking in support of every life.

In fact, if “Mitosis” is fully funded and becomes a reality, Hannah’s plan is to release the film publicly, for free:

Because of the message embedded in this screenplay, we do not want to restrict our audience to those who can afford to purchase a DVD of a short-film. Instead, we want to make this dramatic screenplay available to you and your family and friends free of charge. To complete this ambitious endeavor, we are dependent on your help, not only financially but also in spreading the word, filling cast and crew positions, and volunteering as extras. Once the film is funded, filmed, and produced, we will give the film back to you on a public media site so that you can not only enjoy the product yourself, but also spread its story of life around the globe.

If you feel inspired to support the making of “Mitosis,” visit the film’s Kickstarter page. There, you can join many others in bringing the vital message of the value of every human life to film. And not to worry: while this is the first film for Expressionistic Studios, it’s hardly the first for Hannah Victoria. At the age of eighteen, she’s already directed “Worth Saving” and received a Best Young Filmmaker award as part of the team for “Small Talents.”

Stop by the “Mitosis” campaign, and take a few moments to donate and leave some encouraging words for this young pro-life filmmaker. And of course, don’t forget to keep updated with Expressionistic Studios so that you can share “Mitosis” and Hannah’s other films with your friends – pro-life and pro-choice alike!