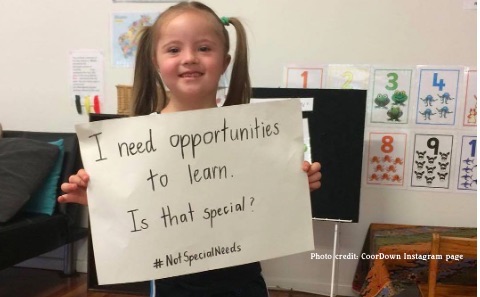 Released for World Down Syndrome Day 2017, which falls on March 21, the video features “Glee” actress Lauren Potter, along with several other actors who have Down syndrome, asking what kind of special needs people with Down syndrome have. The people on the video give humorous examples. Also featured in a quick cameo is actor John McGinley, who has a child with Down syndrome.

But at the end, the video takes a more serious turn, as Potter points out what all people with Down syndrome really need. “What we really need is education, jobs, and opportunities… friends, and some love,” Potter said. “Just like everybody else. Are these needs special?”

As the #NotSpecialNeeds website points out, people with Down syndrome may need more assistance and adjustments, but the needs they have are basic, universal human needs:

People with Down syndrome, like everyone else, have basic human needs – to eat, drink, breathe and sleep – to be nurtured, loved, educated and sheltered – to move, communicate, contribute and work – and to share, love and live.

For example, a person who requires some help in speaking, writing or being understood, is still meeting the same human need that we all share – the need to communicate. The only thing that is different is the degree of assistance or the way they meet that need, not the need itself.

The company behind the video, CoorDown, is an Italian Down syndrome advocacy organization whose recent videos have garnered international attention. Last year’s video for World Down Syndrome Day featured Olivia Wilde as a person with Down syndrome, focusing on the life of a teenager with Down syndrome to show that her life is beautiful, and that Down syndrome does not hold her back. But it was their “Dear Future Mom” that had the biggest impact (with over 7.5 million views); it featured children with Down syndrome reassuring a worried mother that her child would still be able to go to school, ride a bike, hug her, and be happy. The message was that everyone has the right to be happy, yet the video was banned by France’s Counseil d’Etat because the happy children could make women who had an abortion due to Down syndrome feel guilty.

Women who receive a Down syndrome diagnosis don’t need to be indoctrinated with fear and misinformation, and people with Down syndrome are people first and foremost. They should not be defined by their disability or treated as less than human. As this video shows, the needs that people with Down syndrome have are not special — they’re universal human needs, things we all need to thrive and survive. It’s time we saw them as such.