Israeli actress and model Gal Gadot, perhaps most recognizable for bringing the role of Wonder Woman to the big screen, has announced on Instagram that she is pregnant with her second child. “So excited to share this wonder with you… #mommyforthesecondtime,” reads the caption on the latest photo posted on Gadot’s official Instagram. The photo is a black and white selfie shot of Gadot and husband Yaron Versano forming a heart around Gadot’s tiny belly with their joined hands. 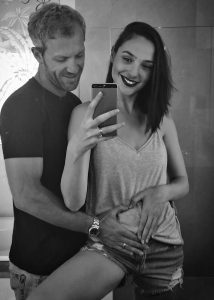 Gadot, who first appeared as Wonder Woman/Diana Prince this year in Batman v. Superman: Dawn of Justice, starring Ben Affleck and Henry Cavill, is slated to portray the iconic super heroine in three more films appearing over the next three years, two of which are currently in post-production. Gadot, 31, is also mother to 5-year-old daughter Alma, whom she has called “the love of my life” in interviews.

This past Spring, Glamour Magazine asked Gadot how life changed for her when she became a mother, to which Gadot replied:

Priorities. I started to choose my battles better. The Jewish guilt I feel about being a working mom is the hardest thing…When Alma was around two, I was really anxious about how to travel with a child, moving her from one country to the other, all the different languages. It was my husband who told me: “Gal, think about what kind of a role model you want to be. If you want to show Alma that she can follow her dreams, that’s what you should do, and we will figure out the logistics.”

Gadot has a spirit of humility and gratitude as she counts her blessings, crediting her supportive husband when she discusses her success. “I wouldn’t be able to do what I do without him,” she explains.

“I realize I’m doing what I want to do because of the women before me who laid the groundwork,” Gadot also says in the Glamour interview. “Without them I wouldn’t be an educated working mother who is following her dreams; I wouldn’t be here.”