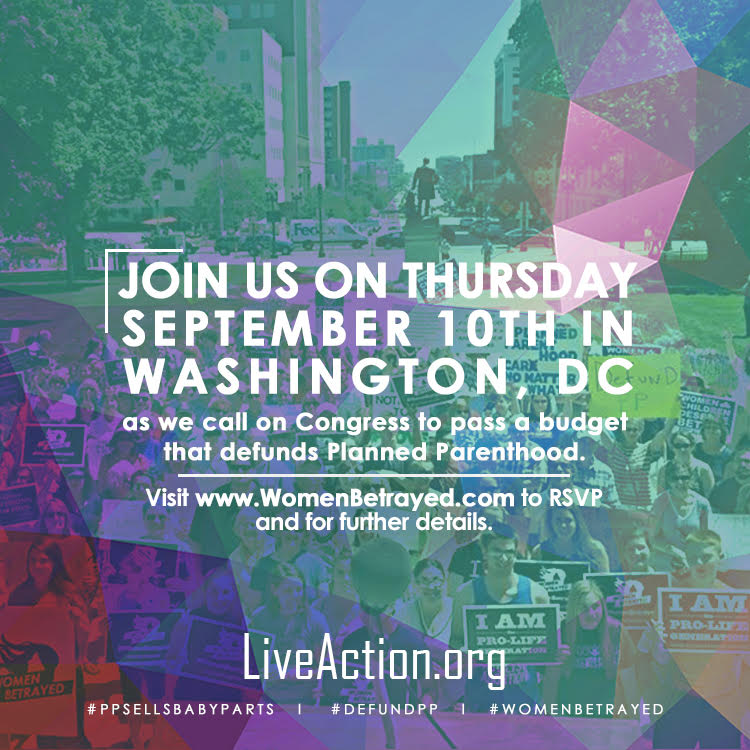 A rally next week in Washington D.C. will urge Congress to pass a federal budget that excludes Planned Parenthood. #WomenBetrayed, a project of Students for Life of America, is hosting the rally, which is sponsored by  Live Action, March for Life, And Then There Were None, Americans United for Life, Christian Defense Coalition, Stanton Health Care, Women for Quality Healthcare, and others.

Planned Parenthood’s back is up against the wall. They’ve been struggling to explain how they aren’t profiting off of selling the body parts of the babies they abort every day, thanks to the undercover videos from the Center for Medical Progress that have been released over the past several weeks.

But now isn’t the time to let up! The pressure needs to be doubled down because Congress heads back to Washington, DC in September and will need to vote on the budget by the end of the month – a budget that gives over half a billion dollars to Planned Parenthood and redirect. That needs to end and it needs to end now.

Sponsors are asking people to join them in D.C.:

After the rally, we will take all rally participants to the halls of Congress, to meet their elected officials, and ask them to personally defund Planned Parenthood. Never lobbied before? No problem. We will teach you all you need to know!

Rally speakers include Live Action President Lila Rose as well as Evangeline Bartz from Americans United for Life, Jeanne Mancini from March for Life, Kristan Hawkins from Students for Life, Carrie Dodge from And Then There Were None, Jessica Anderson from Heritage Action for America, and Alison Howard from Alliance Defending Freedom. Senator Rand Paul is also expected to speak, and Ted Cruz and Donald Trump have been invited. Additionally, a number of post-abortive women will share their stories, bringing the tragedy in America inside the Beltway for legislators to understand on a personal level.

The speakers will focus on several points related to the need for defunding Planned Parenthood, including: