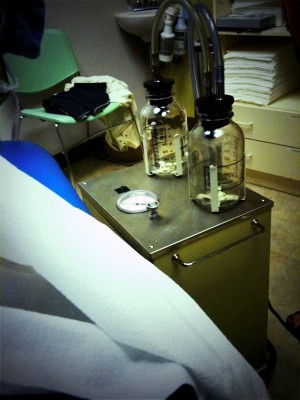 The most ridiculous argument you can make.

An abortion activist has created a website, This Is My Abortion, posting photos of her own abortion at six weeks. She claims that this is to somehow rebut what she calls “sensationalist” imagery that pro-lifers use.

Recently, I had an abortion.

Lining the street in front of the clinic were a dozen or so protesters. They held up large banners with anti-abortion slogans, religious iconography, and images of dead babies.

Just past the bulletproof security doors, the graphic nature of that imagery haunted me in the waiting room. What would my abortion look like? I decided to secretly document my abortion with my cell phone.

My intention in documenting and sharing my abortion is to demystify the sensationalist images propagated by the religious and political right on this matter. The perverse use of lifeless fetus photographs are a propaganda tool in the prolife/prochoice debate in which women and their bodies are used as pawns to push a cultural, political, and religious agenda in the United States.

At 6 weeks of pregnancy, my abortion looked very different than the images I saw when I entered the clinic that day.

This is my abortion.

She posts four pictures, which consist of nothing but two jars. The first two pictures show the jars empty; the next set show one of the jars with blood in it.

(I chose not to post all four pictures as they may be disturbing to some; you can view all four here.)

Currently, there are over 70 comments left on the page, and they are overwhelmingly supportive. She’s praised as if she had performed some kind of amazing, revolutionary act. Fellow pro-aborts laud her photos, claiming that she has somehow proved pro-lifers wrong, with their “sensationalist” imagery which, obviously are doctored.

Of course, it only takes about thirty seconds of critical thinking to spot the massive holes in this entire argument: that pro-lifers are lying and falsifying post-abortion photos, and that this is all an abortion at six week entails, and we can trust her because hey, she has pictures.

Never mind there are only four pictures. What happened before or after those four pictures were taken? Don’t worry about that. That jar may have filled up even more with blood, but don’t think about it.

She’s thanked for letting women know what to expect, but she never actually outlines what goes on during the abortion. All a woman would know by looking at her site is that there are jars and blood involved. And considering there are several different methods of abortion used in the first twelve weeks, her method of education is rather lacking. How on Earth would any woman know what to expect by merely looking at a few pictures of jars on a table? It tells her nothing whatsoever, but we’re supposed to believe that this is more realistic than what she might learn from a pro-lifer?

And hey, the jar only has blood in it, which apparently proves that there’s no baby there, right? Uh, wrong. At six weeks, the baby has a beating heart, and the brain, muscles, bones, and other organs are beginning to form. Little buds will eventually turn into arms and legs. The baby’s face is starting to take shape, too. The baby is also only about a quarter of an inch in size, which is probably why you can’t see it in the pool of blood. That doesn’t mean the baby isn’t there.

Using a six-week abortion to dispel other gruesome abortion images is also laughable. Saying that because she couldn’t see the baby at six weeks proves that stomach-churning photos from, say, a twelve-week abortion are somehow false is the most ridiculous argument one could possibly make.

What’s interesting (but mostly hypocritical) is how the use of post-abortion images is deemed perverse, sensationalist propaganda which serves no educational purpose whatsoever. But four rather meaningless photographs which explain absolutely nothing to a woman about what her baby looks like at six weeks, how he or she is developed, how the abortion will actually be performed, and what it will feel like is somehow praised as educational. Huh? How does that make any sense at all? Pro-abortion activists love to use the word “choice,” and they claim to be all for women making an informed choice. Why, then, do they have such a problem with actual images that show what an abortion is like? If it’s really not murder, and isn’t harmful to women, and isn’t emotionally traumatic, then who cares if women see what the baby looks like afterwards? The reality is that they don’t want the truth to come out or for women to be fully informed. Honesty and transparency hurt the abortion business.

The truth is, if most women knew what an abortion actually looked like, they’d be horrified. If women were given the truth about their babies – knew that their hearts were beating, saw their little fingers and toes, watched them yawn and move in the womb – they would be much less likely to support abortion. Images of a baby after an abortion are heart-wrenching and stomach-turning, for sure, and even this woman admitted that they had an effect on her. And this is exactly why pro-abortion advocates don’t want them seen — because if women see what an abortion actually consists of, they’re more likely to back out. Pro-abortion activists know this, and this woman’s website is a perfect example of how they claim to educate us with “the truth” while actually not telling us anything at all. They’re banking on people taking what they see at face value and refusing to dig any deeper. They know that if anyone did dig deeper, and learned what abortion really is, the abortion lobby loses.