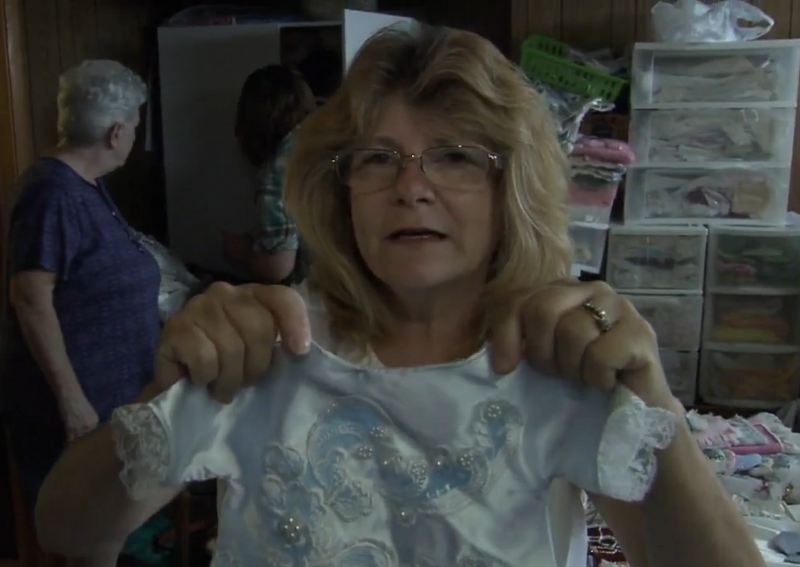 A Michigan woman is turning wedding dresses into infant burial gowns to donate to grieving mothers when their newborn babies pass away. The death of an infant child is usually so unexpected that parents rarely have clothes to bury them in, and this is where Angels Above Baby Gowns steps in.

Founder Dawn Lafferty told Live Action News that she created her organization in May of 2014 after watching the story of a mother in Washington State whose son was stillborn.

“They brought her son to her wrapped in a wash cloth and when she got home she decided to use her wedding gown to make and angel outfit for him. That was the start of what later became Angel Gowns,” she said. Because of Lafferty’s ability to sew, she immediately searched to see if there was a group in Michigan that she could join. Lafferty was unsuccessful, so she used Facebook to launch her new mission. She says the response was instant and within hours of posting her idea on social media, several of her friends told her they would help. Shortly thereafter, Lafferty had a basement full of volunteers to start sewing bridal dressing into precious infant burial gowns. She was soon flooded with donations.

“In the first year everything was funded by me,” Lafferty said. But today Lafferty’s group relies on donations from women who want their wedding dresses used for Angel Gowns. As a result of the interest, she has created a list of drop off locations and mailing locations depending on where the donor lives. “We ask that if they would like to ship the gown that it be shipped directly to our studio. We also recommend that the donor remove part of their gown to keep as a memento,” she said.

In just a year and a half, 2000 members have joined Lafferty’s online group where they coordinate drop off locations throughout the entire state of Michigan. “The volunteers collect the gowns for us and bring them to our studio when they have enough to make the trip worthwhile” she told Live Action News. “I have about 30 volunteer seamstresses along with photographers, volunteers that launder and dismantle gowns, a cutting department that is responsible for cutting out all gowns in various sizes and genders, hand sewers, embellishers, pressers and a packaging department and shipping.”

Once Lafferty’s group finishes the gowns, they put them into little gift packages and donate them to hospitals. The typical package includes a burial/angel gown, a blanket, a hat, headband or bonnet, a burial wrap (which can be used to store ashes if a baby is cremated), an angel ornament, a piece of angel jewelry made from the beads and pearls from a donated gown, a pink and blue infant loss awareness ribbon, and a card. In addition to the Angel Gowns, Lafferty said she hopes to raise funds to purchase a Cuddle Cot, which, according to Lafferty, is “a cooling system that is used once the baby is born still to prevent the normal process of deterioration and allowing the family to have more time with the baby. We are also accepting monetary donations to purchase a Cuddle Cot.”

To do this, Lafferty said she has received a generous donation of brand new wedding dresses which she hopes to sell to young women on tight budgets, something that will help the new brides as well as grieving parents. “We have met some lovely people who have donated brand new high end gowns to us, so that we can offer them to brides for a donations to help fund our group,” Lafferty said.

Angels Above Baby Gowns has grown substantially since Lafferty watched the Washington State news report months ago. Today, Lafferty said they are even outgrowing their space. “We have outgrown our space and work area and are hoping for someone to donate a building for us to use as storage and work space,” she said. “We are all volunteers and we do this from our hearts.”

(Images from Fox2 News and courtesy of Dawn Lafferty)