Seeing what it really is.

I look inside the bucket in front of me. There is a small naked person there floating in a bloody liquid.

Sometimes authors of magazines are allowed to witness abortions in the course of writing articles. Sometimes medical students who never had an opinion on abortion come to grips with the procedure after viewing one. People who observe abortion procedures or abortion remains usually come away with little doubt that abortion is killing a human being.

Author Verlyn Klinkenborg of Harper’s Magazine visited an abortion facility for a 1995 article. After viewing the remains of an abortion at ten weeks, he wrote the following (1):

I felt a profound and unmistakable kinship with the foot and hand in the tray, a kinship so strong it was like the rolling of the sea under my feet[.] … I was surprised by my own sadness, by the sense of loss that I felt[.] … I found it so much easier to be moved by the sight of the disembodied hand the size of a question mark gleaming under fluorescent lights. … In that tiny, naked hand there was the imputation of innocence. 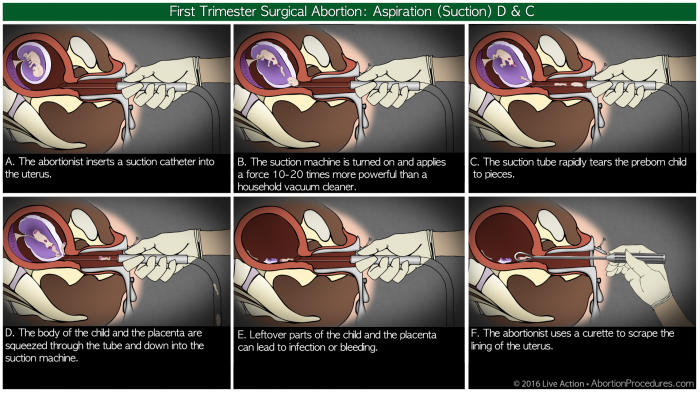 Author Sue Hertz spent a year observing in a busy abortion facility. She saw the remains of several abortions (2):

It was easy to shrug off an aborted pregnancy as nothing more than a sack of blood and globs of tissue – as many pro-choice activists did- if one never saw fetal remains, or products of conception (POC) as they were known in medical circles. But the nurses, medical assistants, and doctors who worked inside procedure rooms … knew that an eleven-week-old POC harbored tiny arms and legs and feet with toes.

At twelve weeks, those tiny hands had tiny nails. Although the fetal head was too small at this stage to withstand the evacuation machine’s suction, pieces of face- a nose and mouth, or a black eye…were sometimes found in the aftermath[.] … Later abortions spawned even more gruesome fetal remains … the head did not come out whole during the evacuation, but the legs and arms and rib cage made it through intact. The hand of a second trimester fetus, as a Preterm doctor described it, seemed big enough to shake.

A writer from the Wisconsin State Journal shadowed an abortionist as he performed abortions in his facility. He says (3):

Christensen performed two abortions that day on women who were at the end of the first trimester. In each case, the tissue was suctioned into a large glass jar, filling the bottom half inch.

Christensen later poured it into a straining basin and examined it “to make sure we removed all of it.”

At one point, he picked up a tiny foot and placed it against a ruler. “Thirteen millimeters,” he announced, “which is consistent with 12 weeks of actual pregnancy.”

Later he held a tiny head. Its brain tissue will be sent to the National Institutes of Health for research on brain tumors.

Peter Korn, who wrote a book about the ironically named abortion facility “Lovejoy,” describes an abortion this way (4):

Still holding the forceps, Lane [the doctor] begins pulling, tearing apart the fetus. His first three tugs yield indistinguishable tissue. The fourth brings out a more solid mass. … Tiny hands and feet, extracted next, are the most recognizable. The head is less so. The pieces of the fetus and the placenta are placed by Lane on a surgical tray at his side.

Pro-choice author Magda Denes witnessed abortions while writing her book In Necessity and Sorrow: Life and Death Inside an Abortion Hospital. She was disturbed by seeing the intact body of a baby aborted in the second trimester (5):

I remove with one hand the lid of a bucket … I look inside the bucket in front of me. There is a small naked person there floating in a bloody liquid- plainly the tragic victim of a drowning accident. But then perhaps this was no accident, because the body is purple with bruises and the face has the agonized tautness of one forced to die too soon. Death overtakes me in a rush of madness … I have seen this before. The face of a Russian soldier, lying on a frozen snow covered hill, stiff with death and cold. … A death factory is the same anywhere, and the agony of early death is the same anywhere.

After dilating, or opening, the cervix, the physician used a curette, the gynecological version of a sharpened spoon, to cut the fetus into pieces he would then remove with forceps. A large petri dish sat on an instrument stand to the right of the girl’s feet, and most of the red material in the dish was unrecognizable. But from time to time during the procedure the physician would tap his forceps on the edge of the dish – and into the muck would drop a foot, or a hand, or a piece of rib cage[.]

Having seen what I saw, I cannot for a moment abide the disingenuousness of those who argue that a fetus is not human, or those who convince themselves that abortion is not killing[.]

An author from Salon Magazine describes two abortions. One was a D&E (pictured below), the other a partial birth abortion, a procedure that is now illegal due to the efforts of pro-lifers. 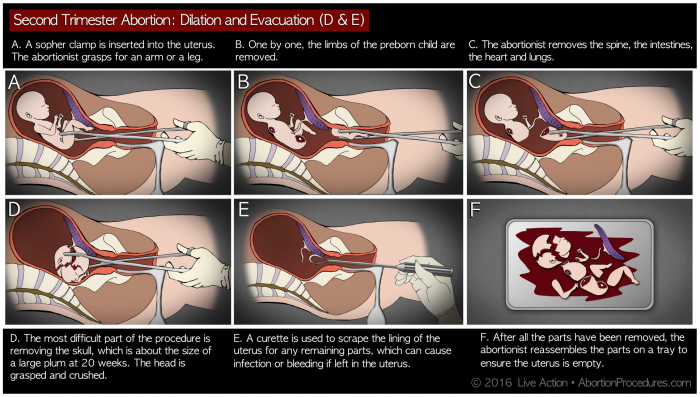 Time after time, the resident plunged the Bierer [forceps] into the woman’s womb, removing a leg, then an arm, then the liver, then the placenta, which the doctor ranted about, because this can make the fetal head extraction more difficult. The last step that I saw was the collapse of the skull and the removal of the brain matter.

A former medical student writes the following (11 weeks, so a dilatation and suction) (7):

The doctor continued talking in his disinterested monotone, and I watched as the contents of the woman’s womb came through a suctioning device and into a stainless-steel pail sitting at his feet. I stepped back and wiped the perspiration from my brow. “This is kind of gruesome,” I said. “Was there some special reason she didn’t want to have her baby?”

“She wanted an abortion,” the nurse replied, “and we’re required by law to do what she wants.”

Is that what you have in that pail? I thought. Does that make it easier for you? I did not have the courage to put into words what I was thinking. I’ve always regretted that.

I stepped forward and peered into the pail. This time I broke out in a cold sweat. Dear Jesus! I thought. I just saw someone murdered! And I just stood and watched! Why did I come down here? How will I ever put this out of my mind?

“Are you OK?” the voice of the nurse brought me back.

“I’m sorry,” I smiled weakly. “I just never realized what it was like.

Do you assist with these all the time?”

“More than I care to admit,” the nurse said. “Actually, I can handle one, but when they start to come back for the second or third time, it really gets to me.”

As I left the operating room, I shook my head in an attempt to get the horrible vision out of my head. I couldn’t. It was there; it would always be there: a little hand…a little rib cage.

The author goes on to describe nightmares he had about the abortion. Now he is a pro-life activist.

These men and women have witnessed the horror of abortion firsthand, and none of them emerged from the experience the same.

Some, like the medical student, became pro-life. Others, like Magda Denes, were able to rationalize their experience and remain pro-choice – but they would always understand the reality behind the rhetoric.

The vast majority of us have never seen an abortion – but we can gain wisdom from those who have. Abortion is a terrible, violent procedure that kills a baby. No amount of sugar-coating can banish that reality. Those of us in the pro-life movement must continue on, knowing we are fighting a battle against the most important human rights injustice of our time.