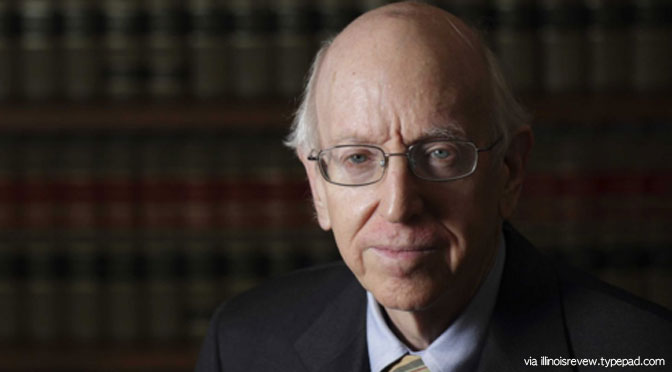 Becca Andrews at Mother Jones calls it a “withering ruling” from a jurist “known for his tart legal arguments.” Tara Culp-Ressler of ThinkProgress cheers Posner for “lay[ing] bare the larger strategy that abortion opponents are pursuing across the country” in “just three sentences.” And Slate’s Dahlia Lithwick says he “pretty much just pantses the judges who argue that the real intent of this law is to protect women.”

Let’s see if Posner’s legal arguments, which attempt to show the law is invalid because its medical rationale is a disingenuous front, really are as devastating as they say.

As it happens, complications from an abortion are both rare and rarely dangerous—a fact that further attenuates the need for abortion doctors to have admitting privileges […] Opponents of abortion reveal their true objectives when they procure legislation limited to a medical procedure— abortion—that rarely produces a medical emergency.

To support abortion’s safety, Posner cites studies by Tracy Weitz and Kelly Cleland. Bad move for impartiality, Your Honor—Weitz is so radically pro-abortion that she denounces the “safe, legal, and rare” mantra as too stigmatizing, directs a think tank known for highly flawed abortion research, and has falsely attacked ultrasound laws as too expensive even though abortion facilities already pay for and routinely use them.

A woman who experiences complications from an abortion will go to the nearest hospital, which will treat her regardless of whether her abortion doctor has admitting privileges. As pointed out in a brief filed by the American College of Obstetricians and Gynecologists, the American Medical Association, and the Wisconsin Medical Society, “it is accepted medical practice for hospital-based physicians to take over the care of a patient and whether the abortion provider has admitting privileges has no impact on the course of the patient’s treatment.”

Why? Of course anyone who shows up at a hospital or calls 911 is going to get treatment in an emergency. But as American Association for Accreditation of Ambulatory Surgical Facilities president Dr. Geoffrey Keyes has explained, there’s more to good care than that:

“If you perform procedures, and someone goes to the hospital, you know what transpired in the procedure,” Keyes said by video link Thursday morning. “You’re not starting from scratch. You’ve been there in the whole process.” […]

Keyes, who has testified in favor of similar laws in Wisconsin and Mississippi, testified that his organization “would not look favorably” on doctors who, like those at local abortion clinics, travel from elsewhere to perform the procedures.

“There’s no continuity of care, no credentialing of physicians in the community,” he said.

But don’t take a pro-life expert witness’s word for it. When commenting on the hospitalization of comedian Joan Rivers shortly before her death last year, NBC News chief medical editor Nancy Snyderman stressed that it was important to “make sure your doctor has admitting privileges to the local hospital,” calling it potentially life-saving.

No other procedure performed outside a hospital, even one as invasive as a surgical abortion, is required by Wisconsin law to be performed by doctors who have admitting privileges at hospitals within a specified radius of where the procedure is performed. And that is the case even for procedures performed when the patient is under general anesthesia, and even though more than a quarter of all surgical operations in the United States are now performed outside of hospitals.

This may indict lawmakers as negligent when it comes to other medical procedures, but it doesn’t make abortion facility regulations unnecessary—and it has nothing to do with Posner’s job, which is determining constitutionality. There’s no Equal Protection Clause for medical procedures.

If a burden significantly exceeds what is necessary to advance the state’s interests, it is ‘undue’ which is to say unconstitutional. The feebler the medical grounds (in this case, they are nonexistent), the likelier is the burden on the right to abortion to be disproportionate to the benefits and therefore excessive.

For the third time in the past two weeks, the “undue burden” test is not constitutional law. The purpose of a Constitution is to place clear limits on government power which politicians can’t weasel around—“in questions of power, then, let no more be heard of confidence in man, but bind him down from mischief by the chains of the Constitution,” Thomas Jefferson put it. If a federal action violates the people’s natural rights without express authorization from a specific constitutional provision, end of discussion. If a state action does not violate a specific tenet of the state or federal Constitution, end of discussion.

The “undue burden” test turns that on its head. Asking judges to decide the degree to which an interest is compelling intrinsically demands subjectivity, value judgments, and consideration of innumerable factors other than the law.

A great many Americans, including a number of judges, legislators, governors, and civil servants, are passionately opposed to abortion—as they are entitled to be. But persons who have a sophisticated understanding of the law and of the Supreme Court know that convincing the Court to overrule Roe v. Wade and Planned Parenthood of Southeastern Pennsylvania v. Casey is a steep uphill fight, and so some of them proceed indirectly, seeking to discourage abortions by making it more difficult for women to obtain them.

In other words, pro-lifers are damned if they try to directly challenge Roe v. Wade, and damned if we try to play by Roe’s rules—a situation far more politically manipulative than what Posner claims to refute.

That’s how his ruling can seem superficially compelling but ultimately not be: his logic may be internally consistent given the legal precedent he’s assuming as a given, but that precedent is itself legally weak and politically biased.

So sorry, pro-aborts, but if you hoped this was the definitive legal takedown of pro-lifers, you’ll have to keep looking.