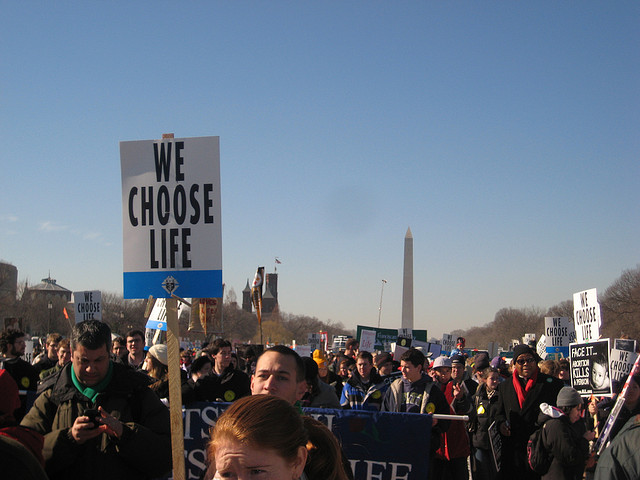 Today, on the 42nd anniversary of Roe v. Wade, thousands of Americans gathered in our nation’s capital to peacefully protest abortion. Others gathered today, or in recent days, in their state capitals or a close-by city to physically demonstrate their stand for life.

The crowds are massive…I’ve never seen anything like it in my entire life.

Why did we march today?

In a 2008 speech, Richard John Neuhaus expressed the hope of many pro-lifers when he said:

All that has been and all that will be is premised upon the promise of Our Lord’s return in glory when, as we read in the Book of Revelation, “[H]e will wipe away every tear from their eyes, and death shall be no more, neither shall there be sorrow nor crying nor pain any more, for the former things have passed away.” And all things will be new.

That is the horizon of hope that, from generation to generation, sustains the great human rights cause of our time and all times—the cause of life.

The March for Life isn’t just a “feel-good” event. It’s a public display of the values of hundreds of thousands of American citizens. It’s a peaceful protest and a stubborn, firm stand in the vein of Martin Luther King, Jr.

We ardently believe — and we mourn — that the basic constitutional rights of millions of our people have been grossly violated. Abortion destroys innocent, helpless human lives and eats away at the core of a humane, dignified society.

There is no choice but to end it.

Today, countless marchers carried signs, or tweeted #WhyWeMarch, telling the world why they marched for life. In their own words, this is why America marched:

These reasons are why pro-lifers march every year.

And it’s why we’ll continue to march on each anniversary of Roe, until legal abortion is no longer celebrated or recognized by our great nation.

Comment below and tell us why you marched for life today — or why you want to march next year.