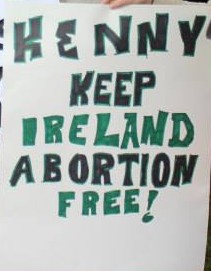 On Monday, I traveled up to Boston College to protest Irish Prime Minister Enda Kenny and his commencement address. Minister Kenny was invited by “Catholic” Boston College to address their graduates and to receive an honorary law degree. So, what’s the big deal? Why was I up there protesting?

As an Irish-American, I’ve always been proud of my heritage. The Irish are fighters and have spent much of their history standing up for freedom and ensuring that every citizen is protected.

The whole culture exudes a respect for human life that is unique to Ireland. I recently lived in Ireland for over 2 years, and one of the first things that I remember recognizing about the Emerald Isle is that there seemed to be more pregnant women and more children walking around than anywhere else in the world. On any given Saturday, the streets of Dublin were filled with young families, children, and pregnant women. There is an intrinsic respect for all human life from conception to natural death that seems to emanate within the culture.

Ireland has a constitutional amendment, which protects unborn children from the moment of conception, which states:

Now, just over two years later, Prime Minister Kenny has completely shifted his position and is now behind the push to legalize abortion in Ireland. Not only is Minister Kenny pushing forward this legislation, but he barred the Irish people from being given the chance to vote on it. This is appalling and goes against everything that the free Irish society has been built upon.

This is why we protested Kenny’s commencement speech and Boston College for awarding Kenny with an honorary law degree. 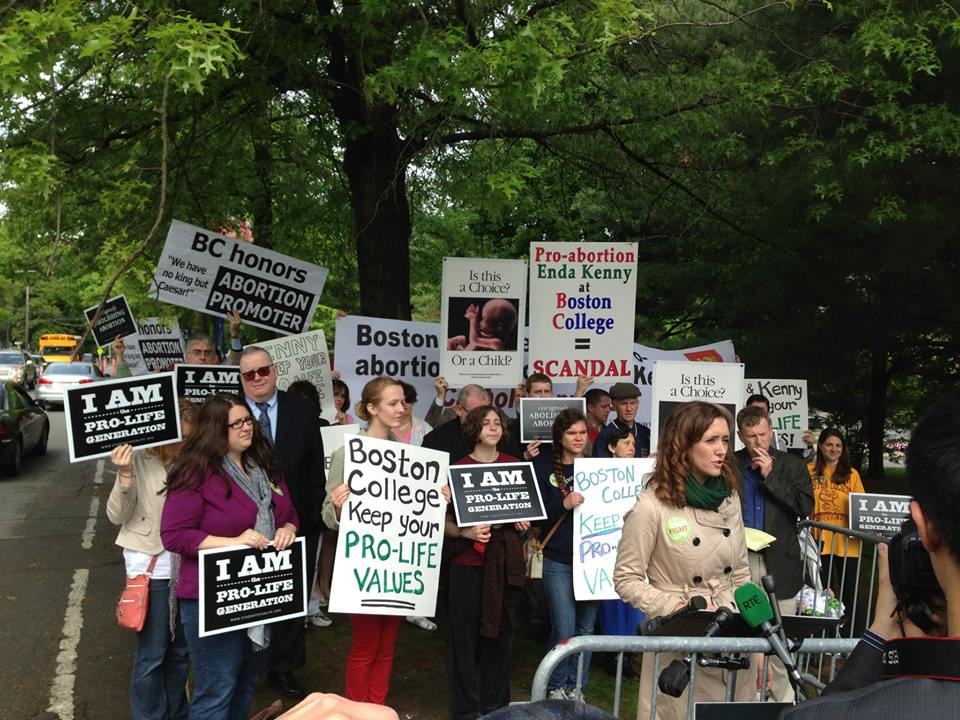 Our protest in front of Boston College’s commencement was a great success. We challenged the Irish prime minister’s speech at BC and brought attention to the fact that Kenny is the most pro-abortion prime minister Ireland has ever seen. The protest got a lot of attention at the commencement and was covered by the mainstream media in the U.S. and in Ireland.

At the commencement, Kenny discussed the “strong connection between Ireland and America.” He’s right to notice that connection, and that’s exactly why many of us were protesting – and why we will not back down. I’ve always been proud of my heritage and have been inspired by the Irish who have fought throughout for freedom and the protection of every human life. I am absolutely appalled by Kenny’s actions to hijack the pro-life ethos of Ireland and turn it on its head.

After his commencement address, journalists asked Prime Minster Kenny about the protesters, to which he said, “I’ve made my position [on abortion] very clear” and “this [legislating on abortion] is intended to save lives, not to end them.”

On the first point, Kenny is right that he has made his position blatantly clear. He lied to the people and supports abortion through all nine months of pregnancy. He was elected to protect the people of Ireland, including the most innocent and vulnerable – the unborn. He should be working to keep the violence of abortion out of Ireland and working to further protect mothers and their children.

With regards to his second point about legislating on abortion to apparently ”save lives,” this is intrinsically false in every way. Abortion never saves a woman’s life; it only kills a child. (Note: Before you start writing your hate mail letter to me on this, watch this video.) Abortion will not save lives in Ireland; it will only kill children and hurt women.

Women and their children deserve better than abortion. Ireland deserves better than abortion. As an Irish-American, I will continue to stand with the pro-life movement in Ireland, and work to ensure that Irish Prime Minister Enda Kenny knows that he is not welcome in America, especially not by Irish-Americans, as long as he supports the killing of innocent unborn children.

Stand with the pro-life movement in Ireland and let’s help keep Ireland abortion-free.