After many years of immersion in the pro-life world, I believe myself to be rather unshockable. I’ve heard stories that would make you lose your lunch, that would give you nightmares for a week. But this week, my sense of abortion shock was renewed with Alex Ronan’s piece in New York Magazine, “My Year As an Abortion Doula.”

Until recently we simply thought of them as labor coaches. Doulas were the compassionate people helping a woman through childbirth, caring for them so women could be more relaxed in the labor process. Until recently no one thought of a doula as a kill coach. That is, until the term “abortion doula” began rearing its paradoxical head.

Ronan’s article was so poignant and tragic I couldn’t entirely decide if I was reading a pro-life or pro-abortion story in parts. Her raw truth made me wonder if she was leading up to a pro-life ending. After all, how could anyone see dead babies with obvious bodily parts and women screaming in surgery and continue to find the work valuable. But she does, and that’s the most disturbing part of it all.

The irony of the “need” for more abortion help in a city with a 37% abortion rate, about twice  the national average, did not escape me as I read the story of Ronan making the rounds of NYC abortions as if she were an appointed angel of death. Ronan details the abortions graphically:

“What’s called the products of conception bucket is mostly filled with bloody gunk. I make out a doll-size arm, fist curled.

“After the abortion, the attending fishes through the bucket to make sure everything is out. The doctors finish but the bleeding doesn’t. They have to cut into Dee’s abdomen to get a clearer picture of what was going on. I watch in awe as they pull back the skin. I’ve never seen a body like this, bright and wide open. Eventually, they have to remove the uterus; there isn’t any other way.”

The words sit there like tales from fiction, yet they are real. The doll sized arm belongs to a dead human being, one she watched be killed. A woman has such a traumatic abortion she loses all her ability to have children because after the baby came the uterus. “There isn’t any other way.” That’s what Ronan says.

Of course there was another way, but that passed well before the woman got into the operating room for surgery. And Ronan also makes no mistakes in calling it what it is, which is truly a surgical procedure. She details blood and gore and pain and screams; she returns for more.

“Second-trimester abortions happen in an operating room, under full anesthesia. They take longer and they’re preceded by laminaria, those seaweed sticks, which often cause a lot of discomfort in the days leading up to the abortion.

“I step between them and the bed, to block their view of the blood.”

And she stands next to the noise of destruction:

“But I can’t take away the sound. Most first-trimester abortions are vacuum aspiration. The machine sounds like a sucking through a straw when you’re at the bottom of the glass. The vacuuming is sometimes painful, but I think patients find the sound harder to bear. LiteFM stations play in the background. Most first-trimester abortions take fewer than four songs. Sitting in bars with my friends on summer nights, I hear the same songs and wonder after the women.”

She even describes a fully formed aborted baby disposed of next to her:

“The fetus comes out easily; they put it in the bucket and shove it near me. It is fully intact, curled on its left side, fists closed, knees bent up. He sleeps just like you, I think. Then, a second thought, an act of distancing: He looks more like an alien than a person. “

The most striking, shocking, and disturbing aspects of this piece all revolve around her honesty. She tells the truth, but then she goes right back to it. She is so matter-of-fact that babies die. It is said that the truth sets people free, but in Ronan’s case it seems to send her back to be an angel of death. To see reality of death and not respond with life is one of the more troubling realities of abortion I have seen. 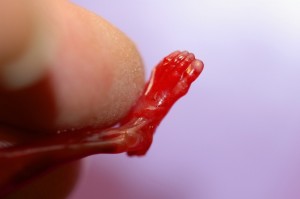