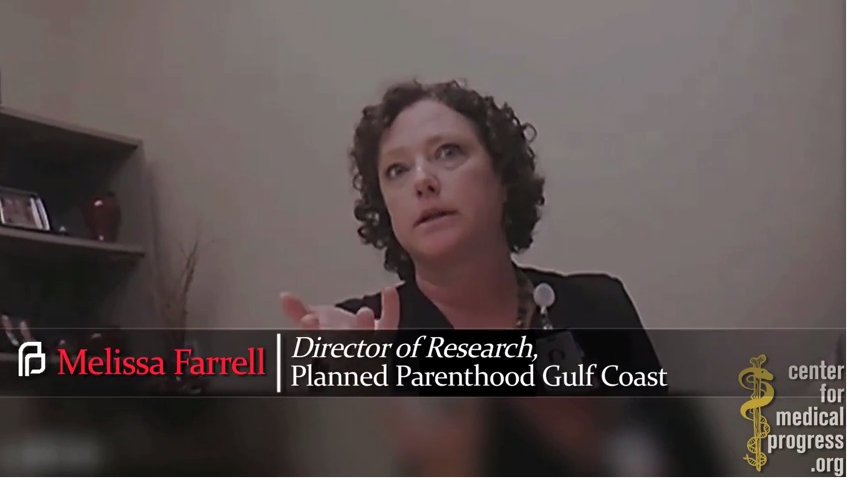 Tuesday morning, the Center for Medical Progress (CMP) released their fifth undercover video. It is the most visually graphic and disturbing yet, and it is also the most damning to Planned Parenthood.

In this post, I’m going to summarize the most important parts of the video, because it’s important that we don’t miss any of this. Rather than putting them in the order they appear in the video, I’m organizing them based on the type of evidence they provide.

I’d encourage you to watch the video for yourself, even though, again, it is very graphic.

The two main legal critiques of Planned Parenthood since the CMP videos started coming out are:

In addition to the evidence from the previous videos, we have these new statements:

Melissa Farrell (of Planned Parenthood): “And we’ve had studies in which the company, or in the case of the investigator has a specific need, for a certain portion of the products of conception. And we bake that into our contract, and our protocol, that we follow this, so we deviate from our standard in order to do that.”

Later, one of the investigators posing as a buyer asks Farrell:

Buyer: “Could you adjust the procedure if you knew, okay they need a high volume of this…”

They are perfectly willing to change procedures if that will help them get the baby parts they want.

Financial Benefit, NOT Just Compensation for the Costs of Donating

Buyer: [Farrell nodding the whole time and saying “yeah” periodically] “So I’m glad that you have that background, so that you see the financial benefits of getting the right specimen and getting it intact, and if you change the procedure just a little bit within the framework that you said so that we’re all talking about it the same way, and the right way, but the financial gain, and being, to your staff, just knowing this is the end we’re going for…”

Farrell: “And then, I think everyone realizes, especially because my [fetal research] department contributes so much to the bottom line of our organization here, you know we’re one of the largest affiliates, our research department is the largest in the United States, larger than any the other affiliates’ combined…”

CMP President David Daleiden said in a recent CNN interview that they have video of StemExpress higher ups admitting they receive intact “specimens.” A restraining order is currently against them releasing the video itself, but given Daleiden’s description of it, this is an additional charge against Planned Parenthood that we should pay attention to. The video they released today showed evidence that Planned Parenthood is willing to give the buyers intact “specimens.” Here are three relevant portions:

Farrell: “So, just depending on the patient’s anatomy, how many weeks, other, where it’s placed in the uterus, we’re going to potentially be able to have some that will be more or less intact, and then, some that will not be. So, but it’s something that we can look at exploring how we can make that happen so we have a higher chance.”

Farrell: “And you know, when it matters, you know in the cases of when it’s mattered, you know, physicians, also need an intact specimen, they can make it happen.”

Buyer: “So for a study like that, if we could provide just a whole cadaver, and then they can take exactly what they want, with the full quality, everything.”

Farrell: “Mhm, take whatever they want.”

Buyer: “That is actually gonna be ideal for them.”

As Daleiden explained in another interview with CNN Tuesday morning:

And whenever you’re talking about fully intact fetuses in the context of fetal tissue procurement, those are situations where no feticide, like digoxin or potassium chloride, no chemical like that can be used to kill the fetus beforehand because that poisons the organs and the tissues, and so in that case it’s prima facie evidence of born-alive infant cases.

And Now All Three Problems Combined…

There are two sections of the most recent video that provide evidence of all three of these charges at once. In the first one, most of the action is on the part of the buyer explaining her perspective on what they’re doing while Farrell nods along the whole time and affirms what she is saying:

Buyer: [Farrell nodding the whole time and saying “Mhm”] “If that provider is needing to change the technique a little bit and I know I’m going against my side of this, but I’m okay with it, no I want you to be paid per specimen, and rather than, oh here, just ship this off, no. This is what we’re looking for, and if you can do that and it compensates you, and financially that’s helping you to grow your clinic, I’m willing to do that.”

Farrell: “Yeah, and so if we alter our process, and we are able to obtain intact fetal cadavers, then we can make it part of the budget, that any dissections are this, and splitting the specimens into different shipments is this. I mean that’s…it’s all just a matter of line items.”

Then you have an agreement that the compensation should be higher for specific specimens (which doesn’t make sense if Planned Parenthood’s “compensation for donation” story is true), and a discussion of how to justify it so they can deny they are selling baby parts. Farrell suggests they can justify charging more because they would have to change the procedure to get the parts.

Buyer: “So we have, for specific specimens, the compensation would be higher…”

Buyer: “Because we know you’re going to run into problems.”

Buyer: “How do we frame that, so that we’re not saying we’re giving higher…”

Farrell: “Yeah. We can work it out in the context of—obviously the procedure itself is more complicated. So that anything that we integrate into that procedure, without having you cover the procedural cost, is going to be higher, right. So anything of a higher gestational age — there’s more opportunity for complication, there’s more administrative time involved.”

Farrell: “Sometimes the procedures are longer, so then anything that we piggyback on to that for collection purposes obviously, would have to reflect that additional time, cost, administrative burden.”

Buyer: “So that our compensation that’s higher to you for our specific specimen intact could be built into that.”

If the answer is yes, I’d be really interested to know what would do it for you.

If the answer is no, then it should disturb you that you are that closed-minded. Blind support for any organization is unconscionable.

(Editor’s Note: Original post written by Timothy Brahm was published at the Equal Rights Institute Blog and is reprinted here with permission.)