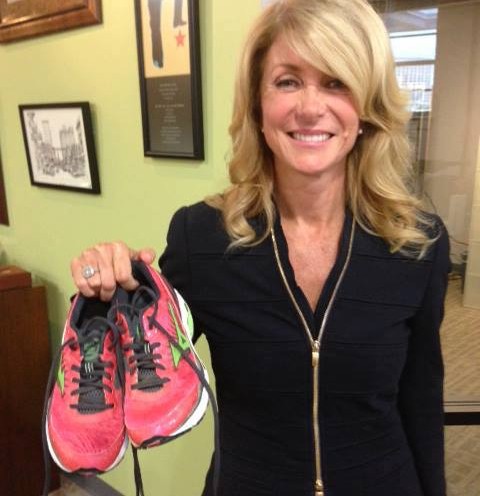 On Wednesday, Wendy Davis celebrated the one-year anniversary of filibustering Texas’ headlining pro-life law from the 2013 legislative session by throwing a fundraiser celebration for her gubernatorial campaign.

This filibuster against humane abortion restrictions and common sense health and safety requirements  is what launched Wendy into the public eye and gave her the coffer-padding needed to make her Democratic gubernatorial bid.

But for someone so proud of her own pro-abortion efforts, Davis sure did a lot to minimize her radical abortion stance on the campaign trail. We’ve scarcely heard a peep from Wendy about abortion since she announced her bid for governor (except when she lied about favoring a late-term abortion ban — the very ban she filibustered). Instead, Wendy chose to center her campaign on issues like early childhood education (forgetting, apparently, that early childhood education is dependent upon early childhood existence. Technicalities!)

The anniversary “celebration” fell far short of success as Davis gave a away free tickets after struggling to find people willing to buy tickets at $20.

At the event, Davis praised the throng of anti-life HB2 opponents who filled the Capitol in burnt orange last summer, reminiscing on their commitment to the abortion movement (ps, said commitment does not come free). She exclaimed that the mob was “the most effective, poignant example of democracy in action.” Apparently, the police force had a different interpretation of the mob’s “poignancy:”

Cementing the gubernatorial candidate’s dedication to the mob, the Democrat nominee for lieutenant governor, Leticia Van de Putte, quipped that abortion supporters would fight on saying, “we’re going to be the unruly mob for as long as it takes.”