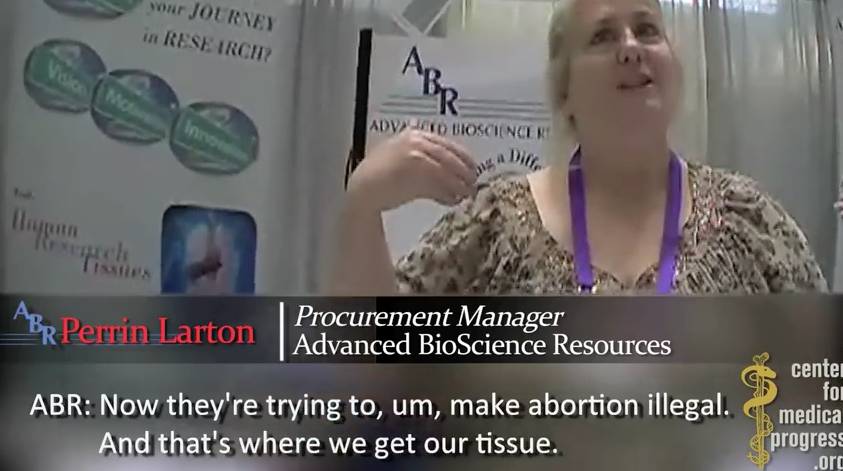 I’m not a Catholic, and I don’t think I’d make a very good one. Still, there are some Church teachings I’ve managed to follow. For example, I’ve never worked for an organization that slices open infants and sells their organs.

Apparently that’s too much to ask at DePaul University, a Catholic institution of higher learning.

The firm has a longtime relationship with Planned Parenthood, and its procurement technicians often wait directly outside the rooms where abortions are performed. Their job is to take the remains afterwards and sift through the pile of severed body parts, collecting whatever organs clients are interested in.

Or at least that’s what’s supposed to happen; as Larton explains at 5 minutes and 7 seconds into the footage above, things don’t always go according to plan:

This is consistent with what Dr. Savita Ginde, vice president of Planned Parenthood of the Rocky Mountains, said. On an earlier CMP video, she admitted that infants are sometimes delivered “intact” prior to late-term abortions. That’s also the video where she looks down at an aborted fetus and declares, “It’s a baby.”

So what happens to babies who are delivered alive?  According to Holly O’Donnell, they don’t stay that way.

O’Donnell worked as a procurement technician for StemExpress, another human tissue outfit tied to Planned Parenthood. In the video below, she recalls the time a supervisor showed her an aborted child whose heart was still beating, describing it as “kinda cool, kinda neat.” Then she was told to cut open the face and start removing brain tissue.

Under federal law, children born during botched abortions are supposed to be protected; yet that obviously wasn’t a concern here. The fact that some of these children were old enough to scientifically experience pain wasn’t a problem either.

Given all of this, you might be surprised that DePaul University would want its students working at Planned Parenthood. Of course, Catholic college students aren’t the only ones contributing to Planned Parenthood; Congress already signed you up.

If you’re not happy about being on Team Planned Parenthood, then sign Live Action’s petition calling for an end to the abortion giant’s funding. It’s available here, along with more proof of Planned Parenthood’s crimes.

America is a diverse country, with people of many faiths as well as those with none at all. However, it would be nice if there were some things we could all agree on. Not supporting a group that kills infants and sells their corpses should probably be one of them.