Costco specials have found their way into pregnancy. While most pro-lifers are focused on stopping the work of Planned Parenthood and others who exist to end human life in the name of “choice,” another sort of facility is gaining more ground than ever: the fertility clinic. And the cost is far greater than we imagine.

Modern science has shown us life in the womb—and also helped us create it. In vitro fertilization (IVF) has helped many women become pregnant, but some say the ethical considerations and frequent destruction of life make it decidedly anti-life. In IVF, a woman’s egg is fertilized outside her body, with her husband or partner’s sperm, or donor sperm, then is implanted back into her womb. It is also often used by homosexual couples. Usually, multiple fertilized embryos are implanted, and that’s one of the reasons IVF is anti-life, as Massachusetts Citizens for Life explains, writing, “…Thousands more children are frozen unused after the conclusion of treatment–entering a limbo of many years time only to be discarded or used for experimentation… resulting in thousands of embryos which are destroyed….”

A New York Times article adds, “The embryos with the greatest chance of developing into a healthy baby are used first, and the excess are frozen; a 2002 survey found about 400,000 frozen embryos, and another in 2011 estimated 612,000. Now, many reproductive endocrinologists say, the total may be about a million.” One doctor noted many couples “kick the can down the road,” ignoring the moral implications of IVF.

Some people believe IVF can be pro-life if unused embryos are released for adoption. But as a Federalist piece explains, even if this is done, it financially benefits the IVF industry and potentially commodifies children. While these children deserve a chance at life, the best solution is not to create “extra” human beings in the first place.

The IVF industry is so profitable that it’s leading to “volume discounts, package deals and 100 percent guarantees for baby making” as an October 2017 Washington Post article explains.

One place providing volume discounts for babies is California Conceptions, which touts a money-back guarantee. Through the Donor Embryo Program, “Participants have up to three tries using donor embryos for one flat fee…. Patients have an alternative to the rising cost of donor egg cycles, the difficulty and uncertainty encountered with adoption, and the long wait for traditional embryo donation.”

To call adoption an “uncertainty” seems ironic from the mouths of those who require customers to obtain sperm from a sperm bank rather than their own partner, if they have one.

The embryo business lists its prices in a manner that makes it seem like buying chances in a drawing: 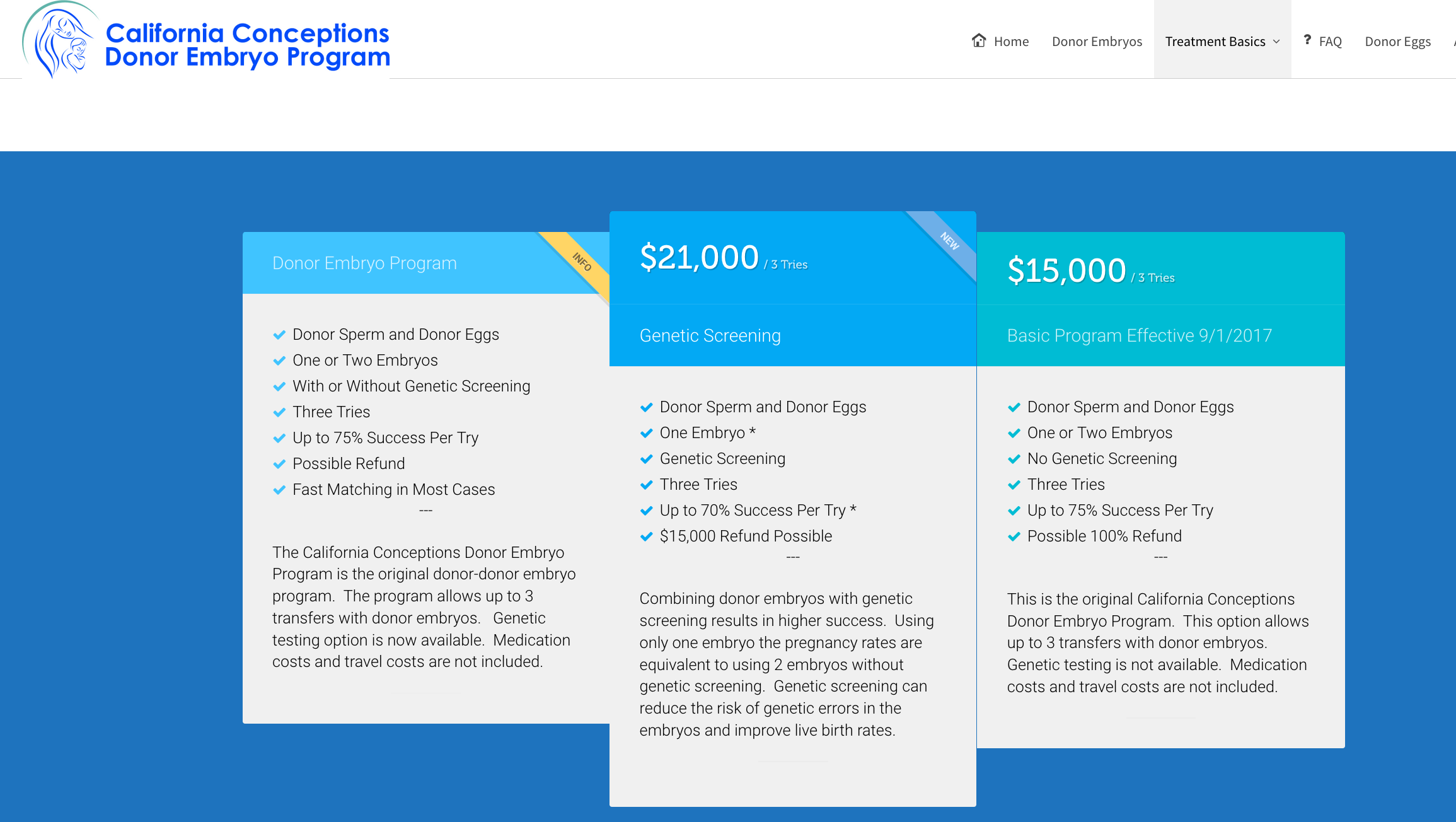 Meanwhile, New Hope Fertility actually did hold a lottery, as the Post reported, “award[ing] 30 couples a $30,000 round of IVF. And the California IVF Fertility Center is pioneering what some refer to as the ‘Costco model’ of babymaking, creating batches of embryos using donor eggs and sperm that can be shared among several different families.”

Also at issue is the destruction of embryos from lack of use or selective reduction (aborting some of the successfully implanted babies), and for not being the “right kind” of baby.

As New Hope proclaims though through veiled medical language, it will be sure to use PGS (Preimplantation Genetic Screening) to ensure an absence of aneuploidy: “The cells are analyzed to verify that all 23 sets of chromosome pairs are identified to confirm the embryo is genetically normal.” (California Conceptions offers similar information). 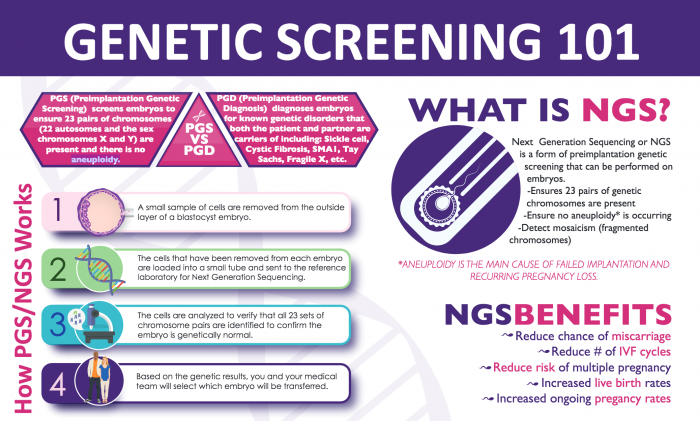 In simple terms, this means ensuring against Down syndrome, Trisomy 18, or similar issues. New Hope explains it can help customers “avoid” having a baby with Down syndrome because, “[i]f an abnormal number of chromosomes exist, that embryo is not transferred.” Embryos, of course, are human beings, and those “not transferred” are generally destroyed. The silent implication is that woman can abort her imperfect baby.

And the perfect baby, for some customers, also needs to be the right sex, adding to the ethical issues with these processes. As New Hope points out, it will allow patients select their baby’s gender.

Additionally, as the Washington Post says, parents are choosing not just gender, but future appearance, talents, intelligence, and skills:

Fertility companies freely admit that specimens from attractive donors go fast, but it’s intelligence that drives the pricing: Many companies charge more for donors with a graduate degree.

And the Fairfax Cryobank in Northern Virginia… typically stocks sperm from about 500 carefully vetted donors whose profiles read like overeager suitors on a dating site: Donor No. 4499 “enjoys swimming, fencing and reading and writing poetry.” Donor No. 4963 “is an easygoing man with a quick wit.” Donor No. 4345 has “well-developed pectorals and arm muscles.”

California Conceptions uses these designer baby principles and then shares them so families can get their discounts. As the New York Times says (emphasis added), “The clinic buys eggs and sperm from donors whose profiles are likely to have broad appeal — like those who are tall, thin and well educated — then combines them to make embryos that are doled out to three or four families.”

New legal issues have also developed. Fertility clinics that take donor eggs and sperm from two strangers and then implant them into several women may create more serious ethical and legal challenges.

The New York Times notes that “perhaps a million” frozen embryos are in storage:

Some are in storage for cancer patients trying to preserve their chance to have a family after chemotherapy destroys their fertility. But most are leftovers from the booming assisted reproduction industry… And increasingly families, clinics and the courts are facing difficult choices on what to do with them….

Our clients are typically people at the end of the line in terms of having a baby. We used to have a regular donor embryo program, but the waiting list kept getting longer and longer, and in six years, we had less than a dozen donors.

Since the program began in 2012, doctors and lawyers questioned “whether it was ethical for a company to create embryos it would own until they were implanted in a patient.” The story adds, “Others were troubled by the whiff of eugenics in the company’s looking for the most marketable sperm and eggs — or the possibility that the children could, unknowingly, meet and marry their siblings.” And one fertility lawyer wrote, “These are not donated embryos. Rather, they are embryos created from donors hand-selected by California Conceptions. It is one step removed from a mail-order catalog….”

Students for Life of America (SFLA) writes why IVF is not pro-life and reminds women there are pro-life solutions to infertility, such as “NaProTECHNOLOGY (Natural Procreative Technology),” which has been shown “to treat infertility, ovarian cysts, polycystic ovarian disease, repetitive miscarriage, and hormonal imbalances among other health complications.”

Of course, as SFLA and others note, the most ethical alternative is usually adoption, which can cost less than IVF treatments, quelling common financial objections to adoption.

MCFL adds that the problem of IVF is at its core, because it “views people as things to be bought or sold as wanted…. No pro-lifer should ever view another human being as merely instrumental to the satisfaction of another’s desires.”

Creating and distributing embryos crosses a line that just can’t be uncrossed.