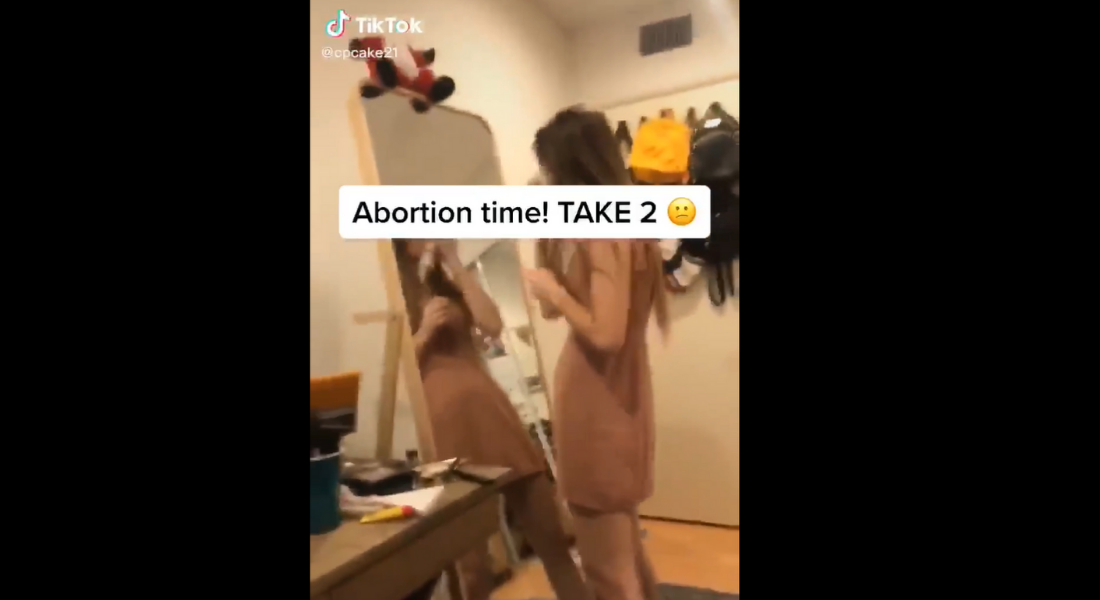 Twitter just locked my account until I removed the TikTok video of the girl joking & filming her abortion at @PPFA. After your RTs & outcry, TikTok removed the girl’s account. Let’s pray for her & work to end the “pro-choice” brainwashing that dehumanizes & kills helpless babies.

Original post: A video that allegedly shows a group of teenaged girls going to get an abortion at Planned Parenthood on TikTok has gone viral, racking up millions of views. What makes it even more horrifying is the cavalier, celebratory attitude of the girls in the video.

The video begins with a girl getting ready in front of a mirror while another person holds a positive pregnancy test in front of the camera. “Abortion time! TAKE 2,” is stamped across the screen. Music is playing in the background. The video then cuts to another girl, cheerfully showing her stomach. The front of a Planned Parenthood facility is shown, while a girl laughs in the front seat of a car.

Disturbingly, once inside, the video shows a couple huddled together in sadness, while a caption about how “there’s two abortion moods” flashes across the screen. The girl getting the abortion is then seen dancing exuberantly while she waits. Finally, she’s seen lying back on the exam table, with her feet in the stirrups. The last shot on the video is of the ultrasound image in the exam room.

The horrifying video was seen over four million times, racking up 340,000 likes, and more than 13,400 comments. Yet it appears to have since been set to private, while the user’s account seems to have been disabled. Live Action founder and president Lila Rose posted the video on her Twitter feed, however, pointing out how it violates numerous TikTok community guidelines, including those against “Violent content,” “Depictions of deaths,” and “Dismembered humans.”

It’s in violation of countless Community Guidelines against:

In a follow-up tweet, she said, “Our ability to be cruel is endless. When society celebrates abortion, should we be surprised to see this kind of cruelty? My heart breaks for this little helpless baby, killed on camera, his young mother joking about it. And it breaks for her, who will live with this all her life.”

TikTok has not spoken about the content of this video. However, the social media outlet made headlines after banning the official Live Action TikTok account last month, originally claiming that multiple community guidelines were violated. Shortly afterwards, however, the account was reinstated, with TikTok claiming the banning was due to “human error.”