A dark period in history is being recognized, thanks to a TikTok that has gone viral. Dr. Karan Raj, who works for the United Kingdom’s National Health Service, has over four million followers and originally used the social media outlet to educate people about COVID-19. He’s since gone on to share general medical knowledge, including shocking information about how surgery used to be performed on babies. Many people think we’ve left such outdated medical procedures in the past, but the reality is we’re still denying how pain affects the most vulnerable patients.

Dr. Raj explained that until the late 1980s, doctors didn’t use anesthesia when performing surgery on babies, because they didn’t think their tiny patients could feel pain.

“This is one of those facts that I really wish wasn’t true, but it is,” he began. “It was a widely held belief that babies couldn’t experience or process pain because their brains were not fully developed, and any crying or flinching was just merely a reflex.”

READ: UK woman files lawsuit: Had I known my baby could feel pain, I wouldn’t have aborted

“Because of this,” he added, “doctors didn’t use any anesthetic or pain relief, just muscle relaxant so the baby could be kept still,” Raj continued. “The babies were paralyzed, but completely aware.” 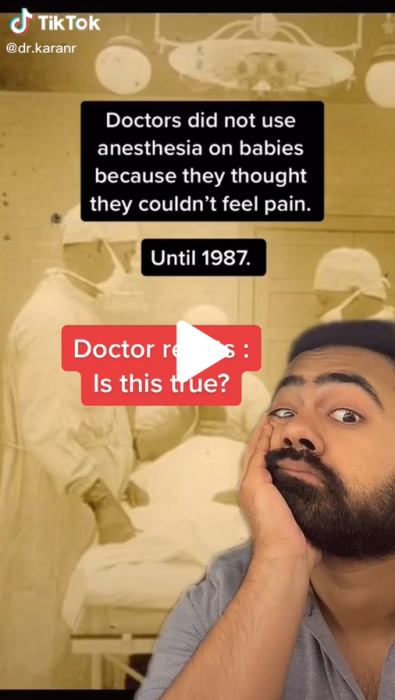 The video has been viewed over 1.5 million times, and according to Newsweek, caused a spike in Google searches on the topic. And Dr. Raj’s video is indeed accurate; doctors did believe it was unnecessary to use anesthesia on infants until the 1980s. Newsweek notes:

Though many hospitals had begun administering anesthesia to infants on the operating table as early as the 1970s, surveys of medical professionals conducted as recently as 1986 indicated that infants younger than 15 months were still receiving no pain relief during surgery in many hospitals across the U.S.

It was in 1987 that the tide against this practice began to change and the medical profession started to listen to mothers who insisted their infants could indeed feel pain.

The outlet also noted that the same year, “the American Academy of Pediatrics formally declared that it was unethical to continue to operate on infants without the use of anesthetics.”

Yet even today, doctors are still surprised at how much pain a baby is capable of feeling.

Understandably, people reacted with shock to hear that such atrocities were committed against helpless infants. “That’s horror, imagine they was feeling everything,” one person wrote. Another added, “So they only discovered babies feel pain like… 10 years ago?!”

In the comments, Dr. Raj further clarified that this was largely a belief for babies born prematurely, and many viewers also expressed relief that they were born after this practice stopped. Yet the truth is, there’s little difference between the horror of what was happening 35 years ago and what happens now during abortion.

The notion of fetal pain is still largely derided, especially by the abortion industry, which mocks the idea that a preborn child could feel pain in the womb. Yet it’s becoming increasingly clear that preborn children are capable of feeling pain, and considering how horrific abortion procedures are, it calls into question the idea that we have somehow evolved past torturing vulnerable children.

Dr. Maureen Condic, an Associate Professor of Neurobiology and Anatomy at the University of Utah School of Medicine and a member of the National Science Foundation, testified before Congress in 2017 that “the overall organization of the [embryonic] nervous system is established by four weeks” and the “neural circuitry responsible for the most primitive response to pain, the spinal reflex, is in place by eight weeks of development.” (emphasis added)

There is no difference when it comes to pain for a preborn child outside the womb versus inside of it. A child born prematurely at, for example, 22 weeks is known to be able to experience pain. Yet abortionists and their defenders would have people believe there is a magical change in the child’s brain when removed from a mother’s uterus.

Given that research shows preborn children can feel pain at younger and younger ages and yet are still allowed to be torn apart during abortion, have we really evolved past the darker days Dr. Raj mentions in his video?

Editor’s Note, 9/15/21: This post has been updated to include a quote from Newsweek.