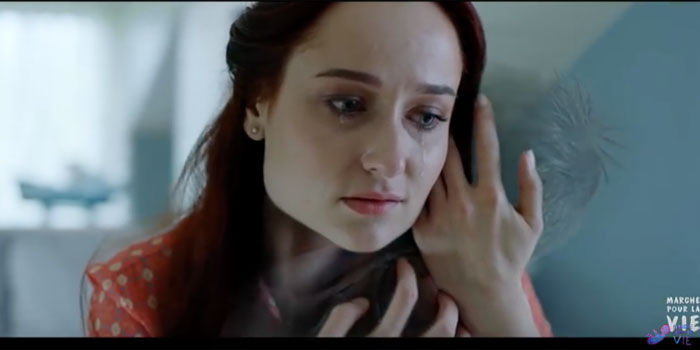 This powerful and haunting video, from Marche Pour la Vie (March for Life) in France, is called “À un choix de the perdre,” or “To a Choice to Lose You.” Marche Pour la Vie shares on YouTube that this video is the story of a woman named Lucie, who experienced an unplanned pregnancy, “and through her, all the women who had to face the decision to abort.”

Warning: The video may be disturbing for some viewers, as it depicts an injured child.

The message near the end of the video reads in French, “Qu’arait été ma vie sans too?” which is translated, “What is my life without you?” Then the word “malchance” appears on the screen, which means “bad luck.” Then, with one letter removed, “malchance” becomes “ma chance,” or “my luck.”

On the Marche Pour la Vie webpage is Lucie’s unplanned pregnancy story. As readers are taken through her panicked thought process, we read her concern at what her mother will say and her fear that her boyfriend will pressure her to abort their child… and indeed, he does expect her to abort. “I do not want to abort,” she says. “I do not want to be pregnant and I do not want to abort, help me!! Tears run down my cheeks but I have to look strong. I know that [my boyfriend] will leave me if I tell him that I prefer to keep the baby, that fragile little life that grows up in me… So I try to close my heart, I must not be sad….”

READ: 12 amazing facts that prove the preborn child’s humanity in the first trimester

She continues by telling of a visit to the gynecologist, where she hears “a little heart that beats on ultrasound.” When the doctor discovers that this is an unplanned pregnancy, he doesn’t bat an eye, saying, “You are 11 weeks pregnant. We can schedule abortion tomorrow at 10:30, there is no time to lose.” She says, “This procedural tone strikes me in the heart like a stab. I scream in myself, ‘That’s all ?? We make an appointment, we kill my baby…?! There is a heart that beats there and everyone does not care?'”

Between 16 and 21 days of pregnancy, usually before a woman even knows she is pregnant, her child’s heart is beating:

She then goes on to say that despite the pressure she felt to abort her baby, she instead chose life. She chose her son:

Today Théo is 4 years old. He is my most precious possession on this Earth. I love him with all my mother’s heart. Obviously it was not easy, far from it; Sebastian left me when he understood that I will keep this child whatever happens, but he has finally recognized it and we are on good terms today. My parents supported me even though it was very painful for them to see me in this situation.

My name is Lucie, I am 27 years old and I am a survivor of abortion. A light shone on the night of this ordeal I was on the brink of abortion, my distress was so intense … I can not explain exactly what pushed me to stop the process of abortion but I feel incredibly lucky to have escaped the intolerable suffering that overwhelms women undergoing an abortion.

From this event sprang my biggest victory.

Lucie’s story gives a powerful message of hope to other women who find themselves experiencing an unplanned pregnancy.

Editor’s Note: If you need assistance or simply have questions about pregnancy or abortion, click here.