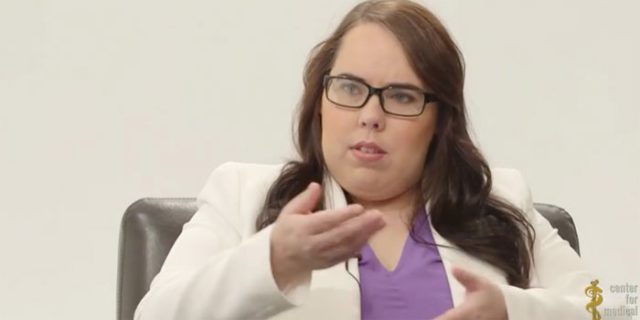 Today, David Daleiden and the Center for Medical Progress released the first in a new series of videos featuring Holly O’Donnell, the former StemExpress fetal body parts procurement technician who was featured in previous videos explaining the gruesome work she was expected to do for her job.

O’Donnell, who worked for StemExpress from December 2012 to April 2013, had previously described how, as a technician, she was instructed to harvest the brain of an aborted child by cutting through the baby’s face and how she witnessed an aborted child who still had a heartbeat.

In the new series, O’Donnell, interviewed by David Daleiden, recalls fainting on the job while being instructed by another technician on what to do when harvesting fetal parts. The press release notes:

“She’s showing me parts of, this is a leg, this is an arm, and then she says, ‘Put some gloves on.’ So I put the gloves on. She hands me the tweezers, and she goes, ‘Oh, can you show me some of the parts I just showed you?’ I said, ‘Yeah.’ And I put the tweezers in, and I put it on one of the limbs, and I’ve never felt this in my life, I felt the pain radiate through my hand. You can feel the death go up through, you know, it was something that was just alive. And I grabbed it, and I felt that, and I started to get woozy.”

O’Donnell says she then fainted and, “Next thing I know, I woke up in the recover[y] room,” of the abortion clinic, where a nurse told her this experience was common and some abortion workers “never get over it.”

CMP posts a procurement document and a job offer letter sent to O’Donnell from StemExpress — which contains details on the amount of compensation provided to technicians for each specific body parts (or category of body part) harvested from aborted fetuses — as proof of O’Donnell’s employment by StemExpress.