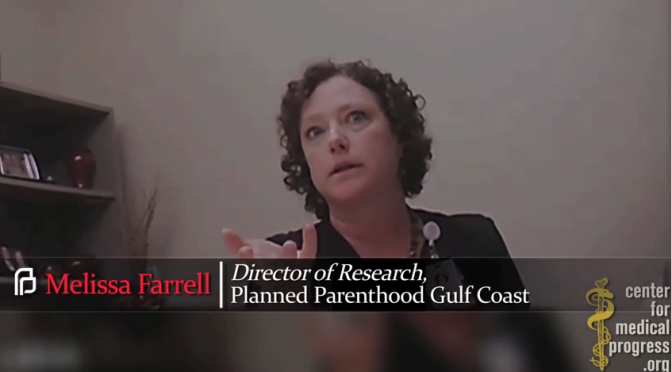 On Thursday, Daleiden will present himself to the Harris County court in Houston, after a grand jury indictment on two charges: Tampering with a Government Record and the Prohibition of the Purchase and Sale of Human Organs. The charges came after CMP publicized several videos (the majority of which were ignored by the major networks) exposing Planned Parenthood’s harvesting of aborted baby parts.

The seven-minute video recycled footage from part of a nearly six-hour-long video released by CMP in August. CMP released Tuesday’s video in conjunction with invoices from PPGC to the University of Texas Medical Branch for “aborted fetal specimens.”

Together, the video and invoices, “show how Planned Parenthood used accounting gimmicks to hide its illegal sale of fetal tissue,” according to a CMP press release.

In the video, Farrell admitted “we get requests a lot for fetal tissue.”

When Daleiden asked if Farrell knew the “compensation” PPGC received “per-specimen” from a company called Amphioxus (his wording was not included in Tuesday’s video), Farrell responded that she didn’t because PPGC used “two levels of invoicing for them.”

The first level was “worded as ‘per consent,’ because the consent process was the administrative part that we had to do,” Farrell said, referring to consent from pregnant women to use their aborted babies.

The second level was an “overall ‘administrative fee’ for basically working it into the clinics themselves,” Farrell said.

Looking at past invoices, Farrell confirmed that “at the time, ‘per consent’ was $25.” “Per consent,” she continued, included, “if a patient consented to be in the study, and then, for whatever reason, we didn’t get a sample, or she changed her mind.”

Farrell “didn’t do that budget” herself, she said, because “it was existed [sic] when I got here.”

PPGC now charges $150 per “consent obtained,” according to financial documents CMP obtained from a Texas Public Information Act request. During the same time period in 2010, Planned Parenthood Gulf Coast charged the University of Texas Medical Branch (UTMB) for 32 “consents obtained” at $150 each as well as 25 “consent payments” at $150 each.

While Tuesday’s video showed pictures of the UTMB invoices, Farrell appeared to refer to Amphioxus which “finished up sample collection” with PPGC in 2008. (In the longer video, Farrell elaborated on how Amphioxus would send courier to pick up a “collection” Monday through Friday.)

“[T]here’s probably some situations that somebody would consent and then just not, we didn’t get a sample, or she changed her mind or something happened to the specimen,” Farrell reiterated. “I can’t think of anything off the top of my head, but, yeah, because we technically can’t – ethically I don’t think they were – based on what I’m reading here, I think it’s paying for the specimen itself.”

In other words, according to Farrell, the $25 fee for “per consent” went towards “paying for the specimen itself,” even if a specimen was useless or if a woman backed out of donating. Or, PPGC received money for the specimen even if there was no specimen.

At that point, Daleiden chimed in, “On paper, it’s gotta be massaged a little.”

The “consent process is what is unique to the visit,” she said. “It’s consenting the patient.”

Daleiden suggested that she might use the same process again.

“Now obviously I mean, we don’t want to end up paying for material that we can’t use,” he said. “And now it might be, if, you know, so if there’s a certain, like, consent fee, and then something else that’s [sic] represents the specimens.”

She responded, “I think definitely a, a-la-carte approach would be the best.”

She also stressed that “[H]ow we frame it, I think, is important too.”

“That you’re not – we’re not altering anything and it’s clear that we’re not altering anything, even if the procedure itself there’s a modification in how they do it, it’s still the same procedure,” she said, “but we’re doing it in a way that we preserve the integrity of the specimen, I think is, yeah, is something that we can definitely discuss…”

With Daleiden, Merritt later stressed, “I just don’t want it turn into a situation where it’s not financially beneficial for you.”

“Yeah, yeah,” she laughed. “I’ll take you up on that. We definitely want to do that. Because I – that’s what staff and management need to see. That we’re not underwriting any project. And I go to great efforts to demonstrate what the cost, actual cost is for us – to whomever asks – and then, this is what is budgeted. So they know, okay, yes, you’re covering costs, there’s margin, that’s covering overhead, or whatever we need, just to make sure everything is – is covered.”

“[W]hen we’re coming in and making it, beneficial to you financially – you can frame it so that that’s … Because that’s how we’re going to keep you happy, right? … To make sure that financially you’re growing your clinic and however you need to say that, frame it on the other end.”

“If we alter our process, and we’re able to obtain intact fetal cadavers,” she said, “then we can make it part of the budget that any dissections are this and splitting the specimens into different shipments is this, I mean, that’s, it’s all just a matter of line items.”

The video also featured a short clip of Melaney Linton, President and CEO of PPGC, recommending Farrell as a representative.

The video cited Texas Penal Code 48.02(b) which reads, “A person commits an offense if he or she knowingly or intentionally offers to buy, offers to sell, acquires, receives, sells, or otherwise transfers any human organ for valuable consideration.”

In August, Farrell made news in the fifth CMP video for saying, “My department contributes so much to the bottom line of our organization here.”

Along with the video’s press release, David Daleiden commented on his upcoming appearance in Houston Thursday:

“The charges against David Daleiden are legally and factually baseless. David used standard undercover journalism techniques to catch Planned Parenthood staff agreeing to alter abortion procedures to get more intact organs and tissue from aborted babies, presumably without telling their patients. David also caught Planned Parenthood staff discussing how to adjust accounting line items to conceal profits from baby body part transactions. Planned Parenthood’s lawyers in Houston have now admitted they dreamed up and demanded the charges against David, apparently in order to distract prosecutors and the public from their own bad acts. We intend to seek to have these charges dismissed at the earliest opportunity.”

This most recent video is unlikely to capture any attention from the major news outlets.

Since the release of Center for Medical Progress’ first video on July 14, the broadcast networks have proven hesitant to publicize the videos – and when they did, they refused to even utter the word “baby.”

Two months after the first video’s release, MRC Culture found that ABC, NBC and CBS had aired a mere 0.13% of the CMP footage during their news shows – or 1 minute, 13 seconds of more than 16 hours.

In early October, MRC Culture discovered that the networks spent more time combined airing Cecile Richards’ defense of Planned Parenthood during a congressional hearing than showing the actual videos themselves.

From the beginning, the liberal media raced to defend Planned Parenthood. In the first 9 hours and 30 minutes of news shows broadcast after the story broke, ABC, NBC and CBS, spent only 39 seconds on the first video. It took more than 24 hours before all three covered the story. In the week after the first video, the networks gave a mere 9 minutes and 11 seconds to the story (in contrast, the nets devoted more than three times that to the Susan G. Komen controversy, when the charity temporarily decided to defund the abortion giant).

ABC, NBC and CBS prioritized animals over aborted babies, by covering the shooting of Cecil the lion more in one day than they did these videos in two weeks and in their reporting on birth of the National Zoo’s panda cubs.

Not only that, but also they refused to cover the tens of thousands of Americans speaking out against Planned Parenthood during nationwide rallies held in late August – except as a side note when CBS tried to connect the event to arson.

Citing information from MRC studies, both Sen. Mike Lee (R-UT) and members of Congress led by Rep. Louie Gohmert (R-TX) have slammed the media for their lack of coverage on the videos.