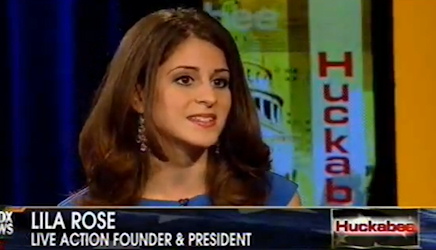 I always find it a relief to see the media giving pro-lifers fair coverage, and fortunately, Mike Huckabee did just that when he had Lila Rose and Niamh Ui Bhriain, founder of Ireland’s The Life Institute, on his show.

The former governor had Lila Rose on his show to discuss the abortion situation in Ireland, and he opened with a brief description of Savita Halappanavar, who died in Ireland, with abortion advocates believing that this happened because she asked for and was denied an abortion. Huckabee mentions that the request was in dispute. He starts the discussion by asking why abortion is a big deal all of a sudden in Ireland, and why abortion advocates are making it out to be so.

Bhriain spoke mostly on the case of Savita, and used the words “hysteria” and “inquisition” to describe the kind of atmosphere that has been created in Ireland. This is a death that, while tragic, also had nothing to do with abortion. Except that in the “hysteria” created by pro-abortion forces and the media, the truth was lost. The journalist who broke the story, after being pressed on a radio news program, admitted that Savita may have never asked for a termination, and Bhriain mentions that hospital records show that she did not. Thus, global hysteria with enormous pressure has not only been mounted by abortion advocates, but based upon false information.

It was then Lila Rose’s turn to share her thoughts, as Huckabee mentioned Planned Parenthood having an impact not only in the United States, but in Ireland now as a global advocate for abortion, as the organization has been behind a lot of the publicity campaign there.

Lila Rose tied the pressure for Ireland to legalize abortion with Roe v. Wade, as she described Planned Parenthood as the “architects in America that created the environment” and mentioned that they did so with misleading statistics to trick the American people into thinking that abortion is good for us. She made the statement that “Ireland can look at other countries and know that their protection of human rights is such a gift and something to fight for.” It was also mentioned that Planned Parenthood has involved itself in Ireland before by bringing cases to the European Court, some of which were thrown out because they were false, with manufactured facts and misleading testimony. It is happening all over again with Ireland. Rose’s suggestion was met with applause:

… I think the lesson is clear: don’t go the way of the misleading abortion industry, trying to make a profit off of the pain of women, and hurt women and children, and stand for human rights like you’ve done for so long in Ireland, and America looks to you as an inspiration point to take back our own country, re institute the right to life in our own nation.

Mike Huckabee then mentioned that if he is to believe what he is told by most liberals, then “this is the most important thing that a woman in America, and Ireland, really wants, is the right to have an abortion.” He mentioned that each of his guests are young women, and neither of them believes this.

Bhirian gave her closing remarks to the effect that she believes that Ireland matters so much to global abortion campaigners, like Planned Parenthood, for instance, because “Ireland is like the proof, the scientific evidence, that you can ban abortion and keep your mothers absolutely safe.” She mentioned that it was the people who decided against abortion and for Ireland to be a safe haven for mothers and babies. It was once again stated that Planned Parenthood is creating this hysteria to force abortion on Ireland, but that the movement is rising up and saying, “Not on our watch.”

Lila Rose finished by once again saying we should absolutely look to Ireland as to how we can protect our mothers and our children. Lila said that “you should look up to Ireland, that you can protect the mother and the child, that you don’t need to choose between one or the other, that human rights can be protected, and should be protected, and we should look at Ireland, we should praise Ireland. We should be standing with Ireland even as they’re on this onslaught of attack from powerful abortion interests.”

Huckabee closed the show by thanking both guests and personally thanking Lila “for all that you do for the cause of life.”