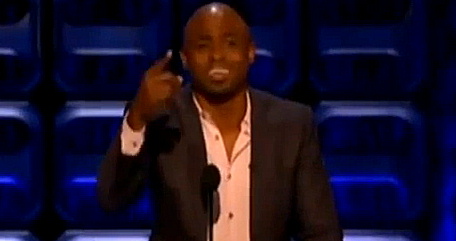 Sunday, Comedy Central held a roast of actress/comedienne Roseanne Barr. Scores of celebrities were there, one of them being comedian Wayne Brady, most famous for his improv work on Whose Line Is It Anyway?. And while roasts are known for offensive jokes, one of Brady’s was booed loudly by the crowd. Brady told another actor, Jeff Ross, that a lot of people hate him, because he reminds them of what Trig Palin will look like when he’s 40. Trig is Sarah Palin’s four-year-old son with Down syndrome.

I guess I shouldn’t be entirely surprised or offended. After all, it’s normal to dehumanize and insult people with disabilities, and especially Down syndrome. Heck, scores of parents demand payouts from hospitals just because their child with Down syndrome was even born. Taking Sarah Palin out of the picture, why is it socially acceptable to say these kinds of things about a disabled child? Consider what Brady said. People hate Jeff Ross because he looks like someone with Down syndrome. I guess in Wayne Brady’s world, everyone hates the way people with Down syndrome look.

What’s sad about this is that a vast majority of people who have Down syndrome were surveyed to be happy with themselves, including their appearance. That’s a wonderful thing, and it’s something that we “typical” people should aspire to. After all, I highly doubt that you could survey any group of adults and find that over 90% of them are happy about how they look. Yet those are the exact results that were found in adults with Down syndrome. But how will they feel when they’re told that people hate them for the way they look? Will they still be happy with their appearance and themselves?

What’s also sad about this is that this event took place before it aired on Sunday. Jokes that were deemed too offensive were edited out. A joke at the expense of a child with Down syndrome, however, was considered acceptable. And apparently, to some people, it’s not only acceptable, but funny. What does that say about how we as a society view people with Down syndrome, or disabilities in general? Clearly, too many of us see them as less than human, as people it’s OK to mock and insult.